Why does my motorcycle cut out at random intervals?

The bike has been stalling at random intervals. This happens when I'm riding at all speeds, and when I'm at a standstill. When the engine dies it's sudden, with essentially no warning. I've taken to keeping the bike geared so that it's not revved high, as if that's the case I can pull the clutch and press the starter and it'll come back without any change in speed, like it never happened. It seems as if the bike just stops firing the spark plugs, and needs a little kick from the starter to keep going. There are days when this doesn't happen at all, and days when it will cut out three or four times within a minute, and every couple of minutes. There's no real pattern to it that I can make out.

When the bike is parked overnight patches of fluid develop underneath the bike, not puddles, and not a drop which you could see without waiting for fifteen minutes or so. The problem seems to be with a bolt on a part directly behind the cooling fins on the engine, about midway up. There's a trail of glistening fluid that has dripped down from the bolt. I'm pretty sure this is gas, but I'm not certain.

Here are some photos of the leaky parts: 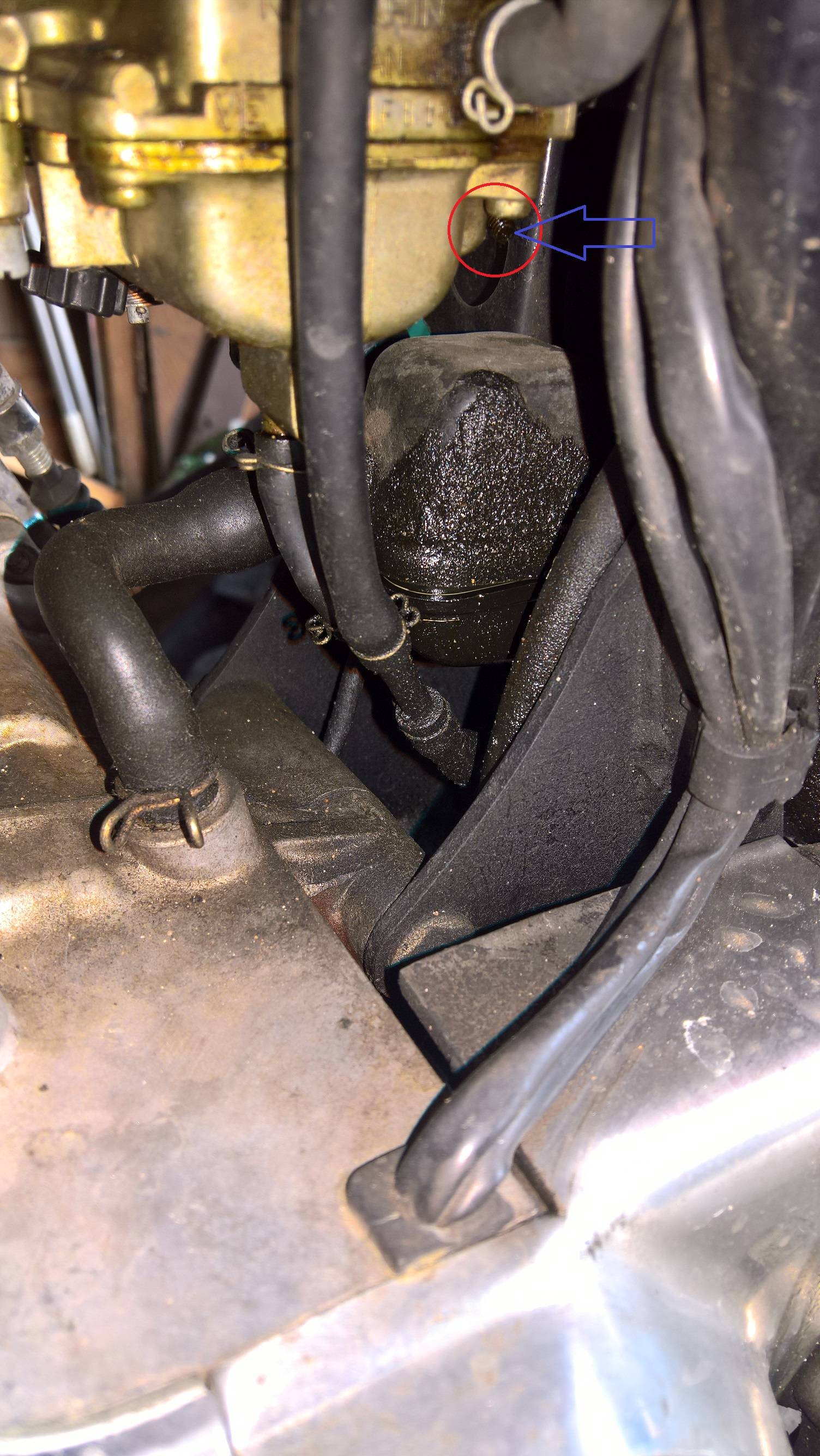 I circled the apparent source of the leak in red. It looks to be a bolt of some kind. 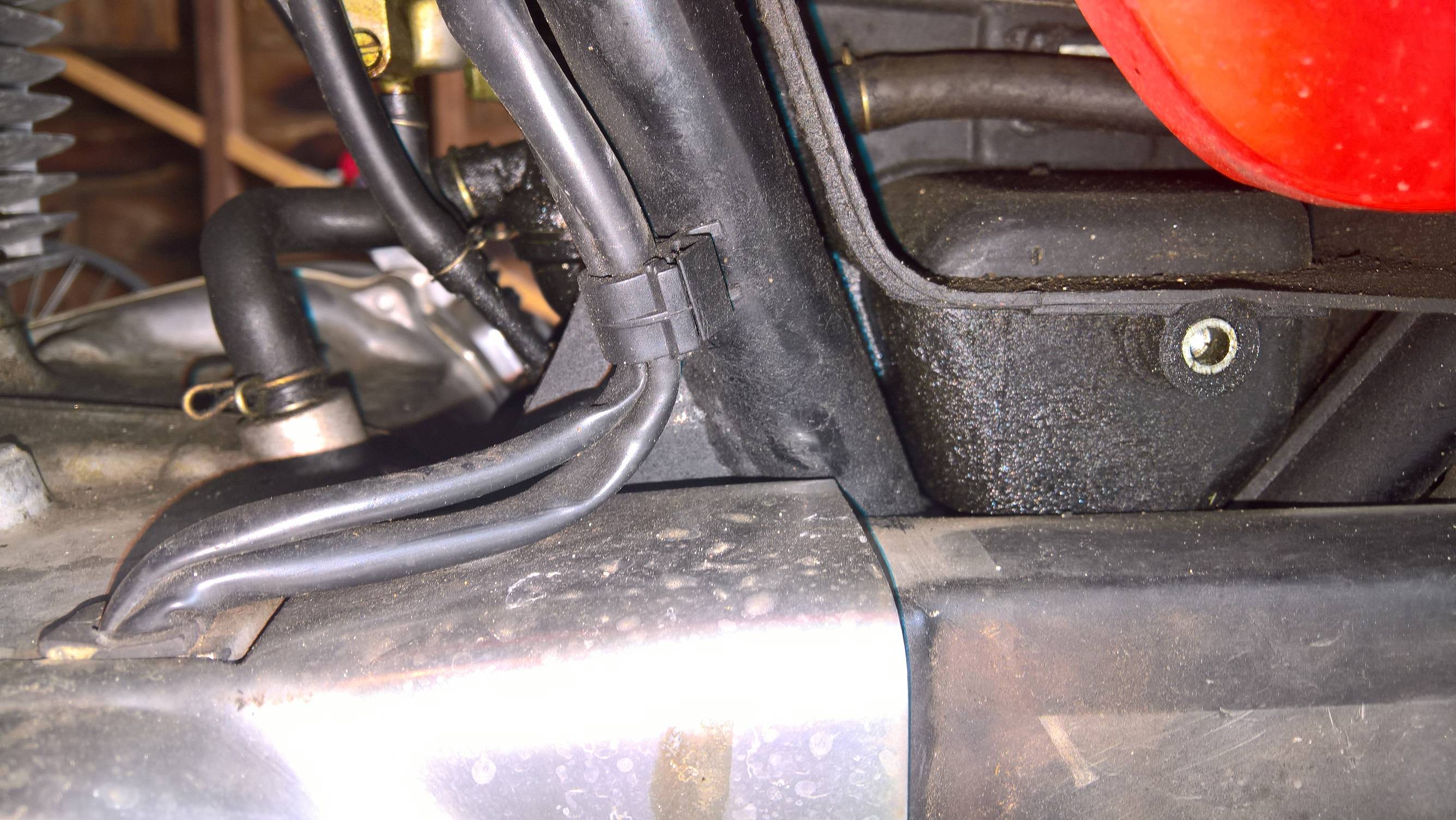 Further back there's still some of the glistening residue, though I'm not sure where this stuff came from; it seems to be out from under the dripping bolt.

My first thought was that the leak could be introducing air into the fuel system, with air bubbles causing the engine to be starved and cut out.

-Leaky part in rear of engine

Is it safe to ride?

I had a bike with similar, though not exact symptoms. The electrical system would dim and lose power intermittently and sometimes so far as to kill the engine. The issue was a faulty voltage regulator, which was preventing power from the stator reaching the electrical system. Some bikes won't fire the spark plugs if the voltage is too low.

I don't know if / how the leak is related, nor if the above applies to your case.

The leak is coming from the carburetor float bowl. Make sure the screw in question is tight. That doesn't work you probably need a new float bowl gasket, which is neither expensive nor difficult to install.

No, it's not at all safe to ride a bike with a fuel leak. Looking down to see flames climbing my leg is one of my least favorite experiences ever.

Dies but always restarts sounds like maybe a leaky intake valve allowing a backfire into the carb? Serious work to fix, not that bad to tolerate. Depends on how fast it gets worse. Does it make a single "pop" noise as it dies?

Wouldn't rule out electrical, but "always restarts" makes me lean against it.

Not the answer you're looking for? Browse other questions tagged engine honda motorcycle or ask your own question.

13
Gasoline is dripping out of a rubber tube outputting on the bottom of my motorcycle - is this normal, or is it a problem?
17
Why is my motorcycle losing power when accelerating?
10
Unknown part fell out of my motorcycle
10
1982 Yamaha Virago - Several things are wrong and i'd like to repair myself
7
Motorcycle Starting Motor does not crank, WHY?
4
Safe to store bike with no coolant?
1
Is a leaky exhaust system on my motorcycle a problem?
1
Why is the throttle on my motorcycle jumpy?
1
Vehicle cut out whilst driving