The ceramic is totally removed, as is the hex nut. The threaded portion as well as the ground electrode remain screwed into the head (and moderately corroded due to a previously unknown leak)

Pictures to describe what I'm looking at.

I have been soaking the bugger in PB Blaster for the past two days and am going to attempt an extraction tomorrow.

Having not worked on cars, but being a mechanically inclined person, I've been scouring the net for information and tips on both spark plug extractions and head removals. But the extraction it looks like a one and done deal. Either it works or the whole head is coming off.

I've got the whole weekend to remove the head, so time is not an issue. My limitations are tools, and experience.

Which brings me to my question: Is it worth the expense to take it to a professional for extraction? Or would he run into the same problems I would? Finally if extraction fails, would you recommend removing the head as a means of experience gathering, a DIY accomplishment, and a money saver?

This question is incredibly helpful and full of more information for people who stumble on this problem: What is the proper way to extract a broken sparkplug?
Spec sheet specific to 2000 Mustang
A nice helpful link from a forum

So it is a number of months after this whole ordeal and with the help of a mechanic/buddy I managed to get through it, here is the full scoop.

So I called and got an estimate from the local Ford dealership, they said they have a special tool to get it out and they will do it for $250, $2500 for worst case (head removal).

Now, at the time I didn't feel like a "special tool","mechanical expertise", and "decades more experience" was worth $250, so I went to buy an extraction kit.

Bought the extraction kit, and it was about 3/4" round (pictures) and had a funny mating, so I headed on down to Harbor Freight (right down the street luckily) and after explaining what was needed (lots of depth, little width, still able to produce torque) I was given a multitude of sockets, extenders, connectors, adapters, and had myself a nice long spark plug extraction kit ready to go. Cue excitement.

Well I went to town extracting this bad boy, learning on the way how an extractor is supposed to work.

An extractor digs into the center of the bolt/screw and continues to bore into it until the force require to dig into it further is less than that required to tighten it (in which case it will tighten). This usually will allow for removal of the extractor and thus, the bolt/screw. But I only hoped it was this simple.

I kept digging in and in feeling resistance, but not getting any sort of traction or tightening that I should have been feeling. That did not stop me. I kept grinding and screwing and turning with a big ass breaker bar trying to get this free. Didn't work.

So I figured that it was stuck. I figured there must have been some hardcore gunk built up in these threads and I let it soak in PB blaster overnight while I thought of a solution. I finally came up with this (retrospect:not) genius solution. I'd hit it with some heat. Things would expand/contract a bit at different rates and I might be able to get it free! So I hit it with a handheld torch (Surprisingly cheap at Lowe's) frustrating because the head of the torch wouldn't remain lit while upside down (down near the stuck hexbolt). After about 30 min on the flames it was the moment of truth. I rigged up my extractomatic and laid all I had into this breaker bar. Nothing, nothing, nothing, then a audible pop. I danced in triumph as I had broken that damn hex bolt free. There was little to no resistance now and I was sure I could just ratchet that bit out now and slap a new plug in and be on my way.

I actually didn't break the hex free, and nothing was coming out. No hex, no extractor, it was all stuck in there. To top it all off I dropped the only crucial socket that I didn't have a backup for somewhere in the valley of my engine. In a fit of rage, I threw my tools down and called for a tow. I told the mechanic (not my buddy) to remove the head and tell me what he saw. 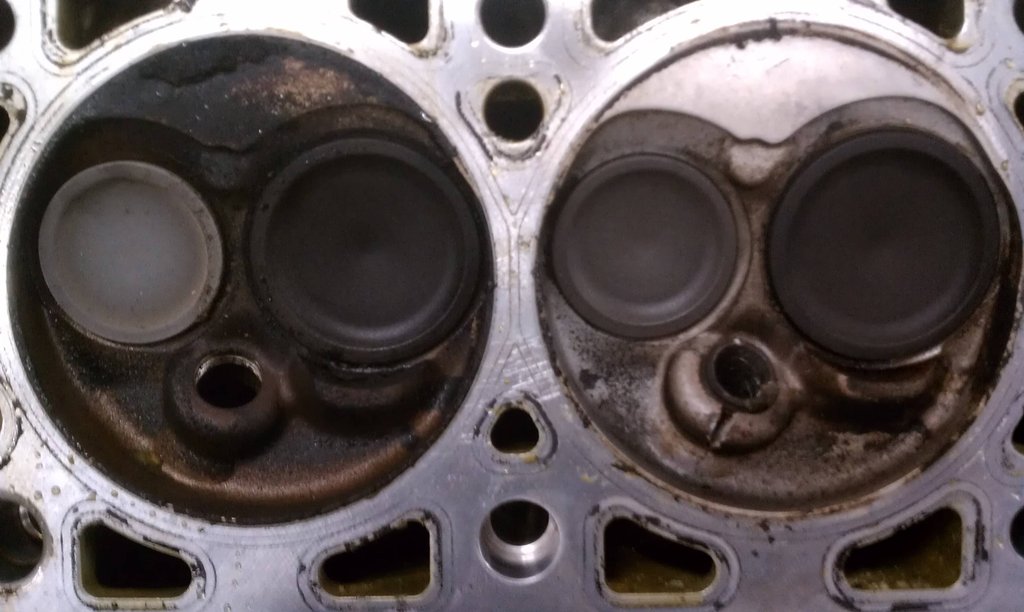 I blew out the backend of my head.

But wait you say! If you blew out the backend of your head, what were you extracting? 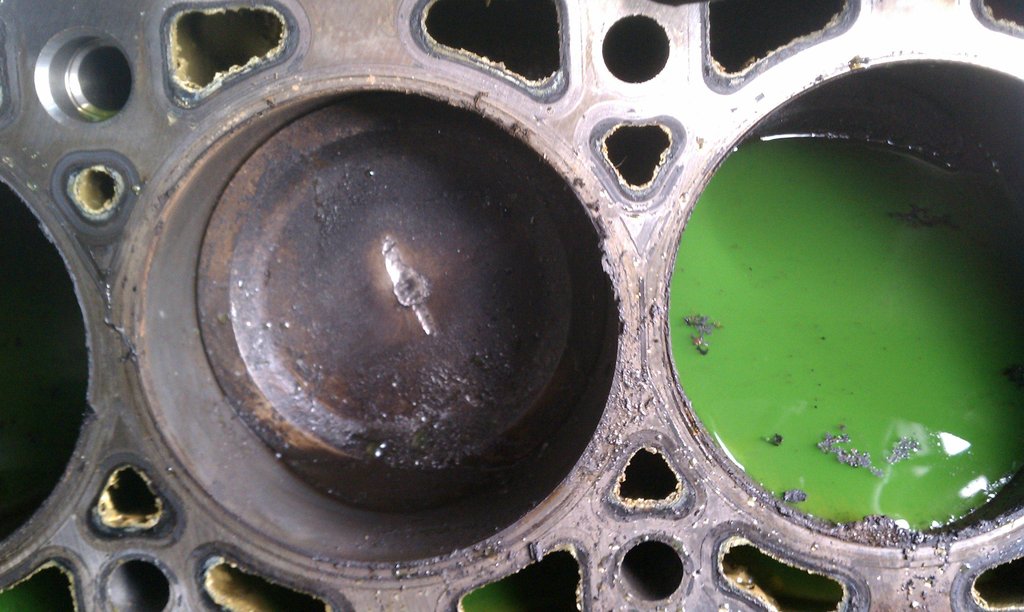 I confirmed with the mechanic that the only way I was extracting directly into the piston head was that it was in the absolute top position (think 1/100,000,000). I ended up buying a replacement head, ignoring the mechanic's advice on replacing the engine (due to the scored piston) and replaced the head with a mechanicfriend in exchange for some computer work he needed done.

The mechanic said the car wouldn't run 10 miles on a scored piston. Some youtube videos, a couple bucks for tools, elbow grease and a mechanic friend and it seems to be doing fine. I've put 7,000 on it and am glad it hasn't blown up yet :)

This is a case of what is your time worth and how long can you be without a car. I would try self extraction first. Short of breaking the extracter off in the remaining plug you can't make it worse. I have a couple of suggestions if you are doing it yourself. When I have a situation like this I soak a rag in PB blaster and wrap it around the fitting. The rag keeps it wet longer. The other tip is to vacum out the hole if you get it out.Some metal fragments may be in cylinder. In terms of taking the head off yourself, the plug will still be stuck. That will require taking it to a machine shop for extraction. Then reinstalling it. So figure one day to take it apart. One or two days at the machine shop. Then two or three days to get it together after you have worked allday. Head removal is a pretty straight forward task. Just keep taking off bolts until it comes off. Installation is a different story. This a job where an assembly mistake can be catastophic for the engine. It will require some basic hand tools and a torque wrench. You'll also have to drain the radiator and changing the oil afterwards is a good idea. In my opinion this is not a task for someone without some automotive experience.

Well, it's not going to be easy. You can try it yourself, say by drilling a hole and trying to extract it with special drill bits--because that's all a specialist is going to do.

However, you're going to get debris in the combustion chamber, so having a shop do this might be prudent. Some shops will remove the head which will allow the stuck plug to be accessible form both sides, and if debris is going in there this also allows it to be cleared out.

Whether that debris will actually do any damage depends on how big and how much goes in.

I guess my suggestion isn't much different that the first one. However, be sure to use anti-seize on your spark plugs, it can help prevent this from happening.

NEVER use anti-seize on spark plugs. Anti-seize has a metal base to it and not used sparingly, can short the electrode and cause a misfire. Also, if you have any questions, look up specs on all spark plug manufacturers about using anti-seize. ALL say not to in their spec sheets. Google "Should I use anti seize on spark plugs" and you will get your answer. I Googled it for the same reason as this article and had to remove the head to get the plug shell out. The spark plug bore had been filled with water for years and simply rusted the plug.

Also, anti-seize acts as a lubricant and a "torque multiplier" and can lead to over-torqueing of the plug and stripped threads in the aluminum head. The torque spec for plugs in aluminum heads is typically 7 to 12 ft/lbs. I install at 10 ft/lbs. I thought the same as what was recommended in another reply prior until I looked it up. With mine, I have to be careful. The threads were saved but not perfect.

The last time I snapped a spark plug I was able to get two screwdrivers down the remains of the metal part of the plug either wise of the electrode tip and was able to unscrew it that way thought removing the cylinder head.

8
What is the proper way to extract a broken sparkplug?