Engine halts when turning on AC

I have Wagon R (Maruti Suzuki) 2011 model with Petrol and CNG. Whenever I turn on the AC, engine stops. What could be the possible reason for this?

This is happening in both cases: Idling as well as running.

Either the engine has very low power, or the load from the Air Conditioning (A/C) system is too large. Both are possibilities.

Question: With the engine OFF and the keys in your pocket, open the hood and attempt to spin the A/C compressor "center drive plate" by hand. It should spin with some effort by hand. The test requires no tools, and takes approx 30 seconds. The result of that test will tell if the A/C compressor or the engine is more likely to be the cause of the trouble. Let us know what you find. 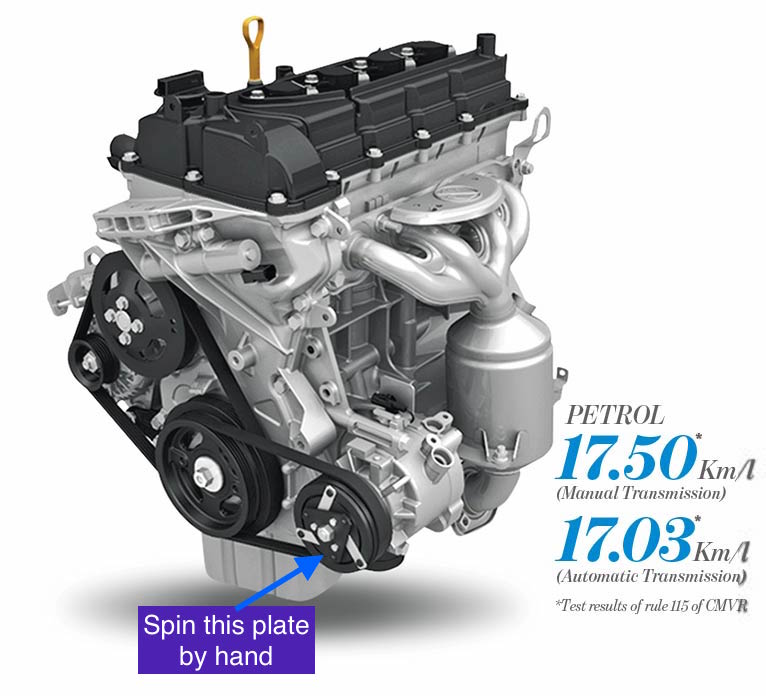 Possibility: A/C system has too much load.

Possibility: The engine is not putting out the correct power. I don't recognize the vehicle type. I'm assuming this is a modern engine with computer controlled fuel injection. If so, the computer should give you feedback on potential power issues (at least relating to the fuel system.) Note: the computer control system is not so great on giving feedback on spark or air related power issues. If there is a bad spark plug, you may not receive feedback.. I will say if that were the case, the vehicle would idle poorly even with the A/C off.

In fact, it's quite possible that the engine is totally good, and the A/C system is also totally good. Because the A/C load is so high, modern computer controlled cars delay the A/C clutch engagement until the engine gets a rpm bump up. This happens so quickly you wouldn't notice. If the "idle bump up" system is not working correctly this would be bad. On old skool carburetor vehicles they had a solenoid actuator that would accomplish this by moving the butterfly valve a bit.. Does your vehicle idle speed control system function correctly? You haven't changed the wiring that drives the A/C clutch have you?

Let us know the results of your "spin the A/C compressor" test...

Not the answer you're looking for? Browse other questions tagged ac suzuki throttle stall or ask your own question.

7
Engine Bogs down with A/C on highway
2
When I drive at 80 kmh the whole car shakes violently
5
Car stalls when braking (VW Mk1 Golf)
3
Peugeot 206 engine occasionally cutting out when idle
2
can i fit clutch friction plate of same size but different company for old motorbike?
0
Wagon R burns engine oil
2
Where is the radiator cap of my car?
0
Tail pipe rattles when AC is on