Clutch Peddle Pops Down When Barely Touched and Doesn't Return

My friend has a manual transmission 2000 Honda 1.6L iSR whose clutch peddle pops down at the slightest touch and doesn't return to the up position unless you pull it up.

The clutch system is hydraulic and looks like this: 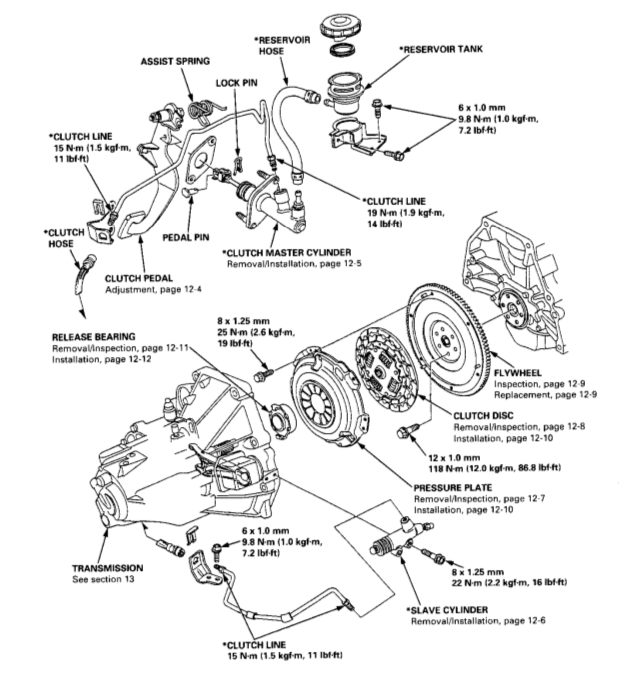 The clutch system uses brake fluid ( DOT 3/4 ) and the reservoir is fullish, and the fluid has clearly not been changed probably ever. When checking under the dash I could see a drop of oil hanging from the rubber seal where the push rod goes into the master cylinder.

My suspicion is that the internal seals on the master cylinder are shot and that he'll have to replace it or have it rebuilt. I was thinking also there maybe air in the system, but then there would still be some pressure and it would just be mushy like brakes get I would think.

He had this problem once before he told me and said it had "worked itself out" the previous time.

Does that sound like a correct diagnosis, and are there any temporary measure I might be able to take to get car to the garage, or is he just better off having it towed?

However, if it does sound like air in the system, could that be because it wasn't properly bled after the clutch was replaced a few months ago?

The mentioned symptoms (no pressure on the clutch pedal) normally would indicate air in the circuit, so I would then recommend a flush.

In your case the description of an oil drop on the cylinder seal leaves no other explanation than a leaky master cylinder. Since the amount of fluid in the cylinders is so small even the slightest leak in the cylinders demands a replacement. I suspect that the leak got provoced by a high water content in the brake fluid (brake fluid attracts water from the air and binds it, the water concentration rises, starting from a certain point rust damages the sliding surface and the cylinder fails).

I would also think about changing the slave cylinder, unless changed at the clutch replacement. Since the contaminated fluid is the suspect root cause both cylinders should be affected. It appears that the slave cylinder is easy accessible, so you could avoid doing the work a second time.

For the needed fluid change I would recommend a vacuum suction pump or a big syringe (no needle) with a flexible, transparent hose. Assist the bleed/filling procedure by applying a vacuum on the bleeding screw of the slave cylinder.

I would check the linkage first between the pedal and the master cylinder if, as you say, there is zero resistance. It could be that the piston has stuck at the lower end of the bore (master cylinder) and not returning - broken spring?

Not the answer you're looking for? Browse other questions tagged honda clutch master-cylinder or ask your own question.

7
What would cause a clutch master cylinder to go bad?
12
Brake fluid doesn't move in the master cylinder container
0
How do I bleed the master cylinder and check the booster for fluid?
1
Bmw 318i msport 2007
1
Brake pedal still soft
1
After changing brake lines the brakes are extremely soft. Bleeding doesnt help and theres no leak. No abs
0
Trouble with 2004 rodeo clutch
2
Mazda 6 2004 Clutch Pedal Will Not Return
3
Brakes are still soft. Do I need a new ABS Pump? 07 Mazda 3