How does excessive undercutting of valves make an engine less streetable?

I don't understand a claim made by Jafro's machinist in this video (around 26:00): 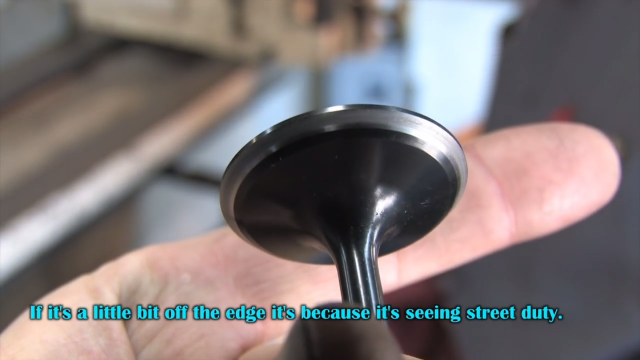 Machinist: You drive it on the street too, don't you?

Machinist: If [the valve face] is a little bit off the edge it's because it's seeing street duty.
If all it was was a track queen, we'd try to move it aaaaaalllll the way to the edge. But always keep that street in mind.

I don't get it. Why is pushing the valve face all the way to the edge a bad idea if the engine will see street duty, but fine if it's meant to see track use only?

having dabbled in valve work including back cutting, Ive heard that reducing edges helps air flow. if these seating faces are closer to the edge then at least in theory be more aerodynamic and less of an obstacle, and perhaps receding deeper in to the valve seat while closed would be some kind of benefit, in theory...

so keeping these faces away from the edge will increase​s durability, especially in respect to heat, therefore I imagine that he judges the street vehicle would want durability over performance. especially for as in my opinion/experiance, the durability takes a big hit to this perceived performance gain.

i could be wrong, just my opinion and interpretation of what you posted

Removing material from the valve stem makes it weaker. If you remove too much material and it becomes too weak, the valve breaks off and typically wedges itself between the piston and the head, causing the car's power to decrease by 100 percent and dollars to rapidly leave your wallet.

On a race engine which gets torn down frequently, a few extra hp worth of flow might be worth the price of making your valves a inspect/replace item. On a street car, you aren't going to be frequently inspecting the valves, so you really need to err on the side of caution to avoid expensive catastrophes.

One other consideration with engine setups for the street is that you aren't constrained by the rules of a racing class, so you can get extra head flow from forced induction and nitrous on a street car rather than trying to squeeze power from a rules compliant engine. This is why you see spec miata guys paying 20k USD for an engine that makes makes 150 horsepower while the street guys are throwing together reliable 250+whp builds for under 5k USD. It isn't that making 150hp from a miata engine is hard, it's that it's hard to do without breaking the rules of the racing series.

Keep in mind that there is no guarantee that undercutting a valve gives any power at all, since flow through the head is determined by a LOT of variables, the size and shape of the valves being only a small part of the big picture.

I decided to ask Jafro in the comments section:

Around 26:00 your machinist talks about keeping the face off the edge since the engine's going to see street duty. Why does he say that? Does the longevity of the valve take a hit if the face is pushed right to the edge?

Yes, that's exactly right. The extra edge around the seat serves as a heat sink. If you've got a red-hot glowing valve slamming shut 3500 times per minute (valves operate at half the frequency of the crank), they stay together longer if they're not slamming shut on their edges

So according to Jafro, cutting the valve face so that it's right on the edge has the effect of reducing the useful life of the valve, regardless of whether it sees street use or track use.

2
Burn marks near SOME exhaust valves inside heads
21
What is valve float and how does it impact engines?
11
"Valve like" noise after modifying camshaft ninja 300
17
How are rotary valves sealed
5
Why does opening the throttle body make the engine rev higher?
1
Benelli TNT 150 has how many valves?
0
Does lapping valves ensure the seal of the valves?