How to repair alternator slip rings to stop squeaking?

I have a new Bosch CS-130 style alternator with a couple hundred miles on it.

Since I installed it, it's been a little noisy, but I attributed that to the brushes breaking in to mate with the slip rings.

Unfortunately, it got worse recently and has turned to a squeak. Since I don't drive the car much, the new alternator is already out of warranty (1 year) even though I've hardly used it.

Upon close inspection, I found that the alternator squeaks during one specific part in its rotation. The squeak is coming from the brushes, not a bearing.

I disassembled the alternator and found that that the front slip ring has a strange color on one spot. It looks like excess epoxy was dripped onto the ring during assembly, and this caused one of the brushes to wear it unevenly. 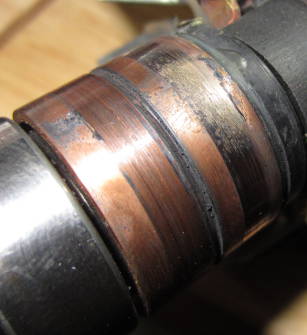 The rest of the slip ring is worn evenly: 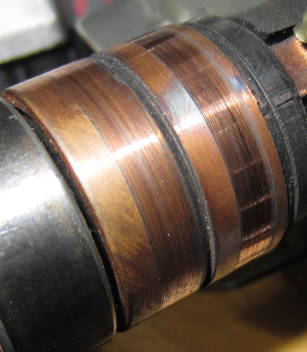 How do I repair the slip ring surface so the brush can break in properly? Can I just turn it on a lathe? What about the surface finish?

I found a repair/rebuild guide for the CS130 alternator. Page 5 contains the following:

CAUTION: The rotor must be rotated in order that the slip rings are cleaned evenly. Cleaning the slip rings by hand with-out spinning the rotor may result in flat spots on the slip rings, causing brush noise. Slip rings that are rough or out of round should be trued in a lathe to .002 inch maximum indicator reading. Remove only enough material to make the rings smooth and round. Finish with 400 grain or finer polishing cloth and blow away all dust.

Thank you for posting clear pictures. This looks exactly like the slip rings on a high output alternator I removed from my 1995 Toyota Corolla because it would fail to charge after sitting overnight. Smacking the shell with a c-clamp or small wrench would fix it for a day or two. I could tell when it was about to fail because it would make clicking sounds on my radio from one brush bouncing.

There was no blob of epoxy, but one brush looked like the pigtail had been soldered poorly. I resoldered both pigtails and sprayed contact cleaner on the brush holders and used a paperboard finger nail file to polish up the slip rings.

Reassembled, it has worked well since. The brushes didn't looked damaged or worn and the brush springs had the same pressure. I didn't think it necessary to try and turn the rotor/slip rings. I just polished them enough to level them off and remove embedded carbon. Then I sprayed contact cleaner on the assembly to remove grit and carbon dust.

13
How to assess battery charge level and alternator performance?
7
How to detect a failing car alternator..?
2
How to replace an alternator?
10
How can I clean the dirt build-up in my alternator?
5
What are slip rings with respect to a cars alternator?
14
How to determine exactly what's wrong with my alternator?
1
Considerations when handing over botched DIY alternator/electrical repair to a mechanic
1
How can I test alternator
1
Alternator gone bad after collision repair