Help me diagnose the cause of this intake valve burn

I would like some help diagnosing the probably cause of this intake valve burn as seen in the picture. 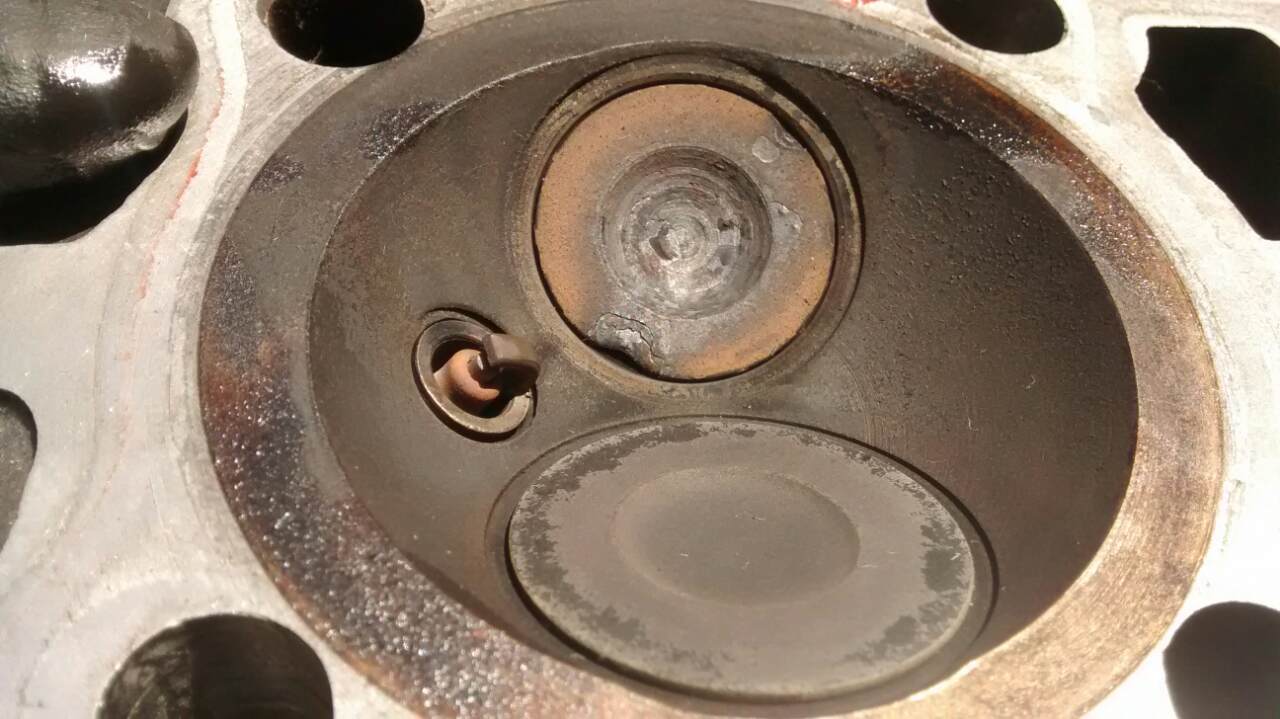 Now here is the rub. this is engine originally 9:1 CR, I have decked the head a total of 35 mill to increase the compression to a calculated 10:1 CR.

Of course i am aware of the increased compression brings higher heat, but running 93 octane, and never experiencing a pre ignition engine knock, i did not/do not anticipate a condition that caused a burn while the intake valve was extended. And rather would expect a burn to occur more on the exhaust valve if due to the higher CR.

But note it was a slow failure as i noticed the valve reducing in diameter as it rotated and burnt away during operation, receding deeper and deeper into the valve seat causing the first manifestation adjustment the valve lash screw higher and higher until there was no more thread for adjustment.

i measured flatness of the head and the rocker assembly, they were fine so i knew it was not a warp or valve train problem. The final failure of course total loss of compression as the large pit obviously didn't allow seal.

My research indicates a burnt intake valve generally due to valve leak, where the hot exhaust gases might slip through and pit the valve.

I should note just prior to disassembly i noticed the valve stem seal had slipped up and off the stem, this perhaps merely indication of excessive pressure due to higher heat.

As @Zaid points out the smaller valve is the exhaust, thus i was confused to the point of more confusion...

Truthfully i never even thought much about port size variance..

In my opinion, the CR is higher than 10:1 and the valve burn is due to the higher compression ratio.

You have shaved too much from the cylinder head.

Not the answer you're looking for? Browse other questions tagged motorcycle valve air-intake or ask your own question.

3
Why is this hollow plastic piece attached to the Karizma's air intake?
3
Could taking coolant through the intake filter realistically cause permanent inability to start?
2
Would using a cooler plug help or even prevent this level of exhaust valve damage
1
When should I suspect that valves are not sealing
1
Buick Rendezvous 3400 SFI no start when warm/hot
0
Astra h engine oil consumption
1
P0022 after fixing P0348, camshaft related
7
Stuck valve in lawn tractor Briggs & Stratton OHV