How can I confirm if my (petrol) car's engine oil was actually changed?

I recently took my car into what is supposed to be the best garage in town (certainly, the most expensive). Foolishly, partly because of their reputation, I didn't take precautions I'd normally take like taking a photo of the oil state before going in, I just knew it was a slightly brownish amber colour and might need changing. I didn't question them when they said one of the things they'd do was change the oil and filter and fix a few related issues with the oil pan.

After getting the car back, it looks like they didn't actually do several of the jobs they were supposed to, and there are plenty of other reasons to be suspicious (for example, we agreed a quote including changing the brake pads, but they didn't change them, and it wasn't until after I'd come to pick up the car, after they'd told me everything was done, and after I pointed out to them that the brake pads were the same as when I took the car in, that they admitted or explained this and prepared a new invoice with the cost of the brake pads removed...).

I'm starting to wonder if they might have lied about changing the oil as well. This is a country with very low standards for mechanics, so it wouldn't be particularly surprising.

How can I tell if the oil has indeed been recently changed?

One thing I've tried already is to look at the oil using the dipstick, and it looks very similar to how I remember it being before taking the car in. Looking at various guides, to my eye it looks like it's somewhere between "fresh" and "should be changed". This car is petrol, not diesel where the oil often changes colour immediately after an oil change, but it is quite old ('97 Toyota RAV4) if that's relevant. I'm not sure if this is evidence it's old oil that was getting close to needing changing but didn't need it urgently, or if it could be new oil that simply discoloured a little naturally.

Here's a photo of how the oil is currently (I really wish I'd taken one like this before going in...), taken using the dipstick while the engine is cold. If the work was done, it was last Friday, and this photo was taken on the Tuesday morning after driving for about an hour to take the car home on the Monday. 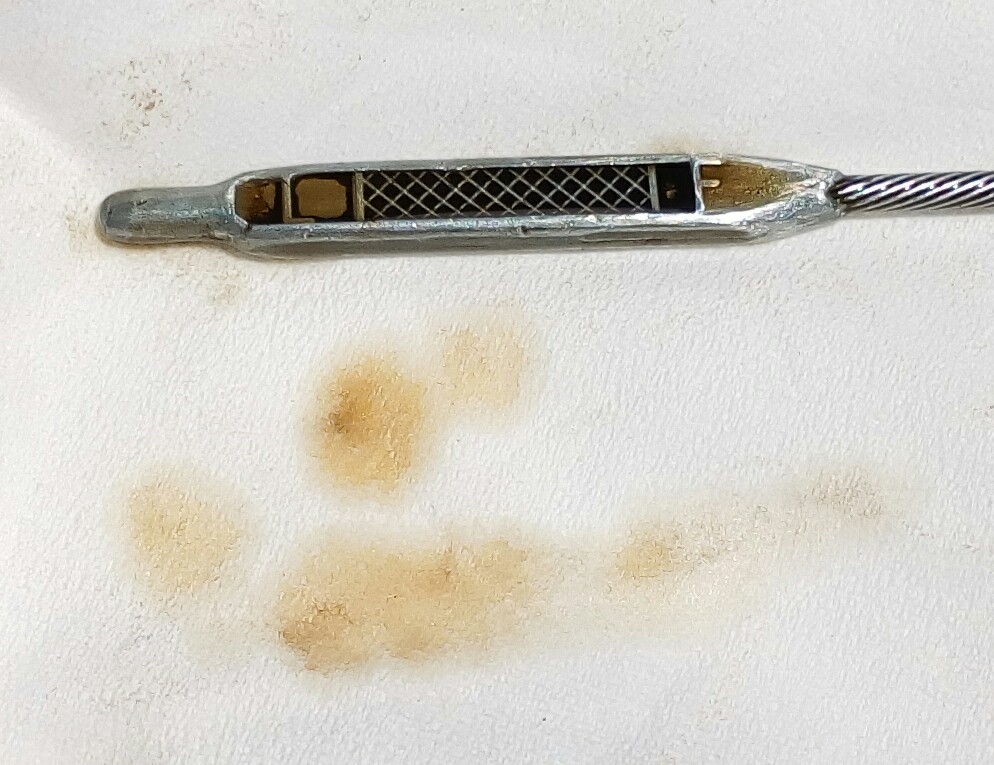 Update - I've questioned the guy from the garage about this (and the other problems). He's insisting that any discoloration is because it's an old car, and he's (rather shamelessly) taking the opportunity to try to upsell me an oil flush... I'm starting to suspect that they did a very half-arsed oil change, just draining and replacing whatever came out of the sump quickly, possibly not even warming it first...

The best way is to smell it.

Oil that has been used will always have a smell of gas because of piston blow-by.

Piston rings have gaps to accommodate for thermal expansion, so there is always a bit of combustion gases going to the crank case and the oil will pick up the smell; unless you have a car with a dry sump but this is very uncommon.

Smell it and you will know right away if the oil is new or not.

It might be fine... used diesel oil is normally black as you say. How many miles did you have since the previous oil change?

There is no way of being sure.

The "post oil change colour" depends on how much oil they actually drained out, for example, I jack my car up on one side and leave it overnight which gets a little bit more old oil out.

If I do a quick oil change, where I only wait until the draining oil slows to a drip, then the colour of the oil after the first drive is considerably darker than waiting overnight.

I doubt any garage will leave a car taking up space when they can just wait for the draining oil to slow to a drip. Many places don't even remove the drain plug, they insert a thin vacuum hose into the drain plug and suck the oil out, so there is a lot of discrepancy.

Also, you could pose as a new customer, and ask what brand of oil filter they normally use for a diesel Toyota RAV4, and check if that is what's fitted to yours and if it is clean and shiny. Do you remember what was fitted during the last oil change? In case they wiped it clean.

Not the answer you're looking for? Browse other questions tagged oil oil-change or ask your own question.

42
How far can I drive with 1 gallon too much oil?
13
Is it normal for the oil to be dark in color right after an "oil change" in a 10-year old diesel car?
3
Oil dipstick with burnt oil on it
6
How to clean engine when oil is contaminated with metal shards?
2
Checking oil on a newly-aquired used motorbike
5
8-9 Quarts of oil in engine after adding a stupidly high amount. What kind of damage can I expect?
3
What is the difference between old engine oil and old gasoline and how it affects a car
1
How can I detect bearing damage caused by oil?
1
2002 Dodge Ram 1500 4.7L V8 Magnum Oil Change Capacity vs Dipstick Reading
0
Can an engine run without oil for a few seconds, if the oil change was just done