How does condensed water get sent out of an exhaust system?

We've all seen water dribbling out a car exhaust when we're following someone accelerating out of a stoplight. I know that the water is an inevitable product of combustion, but I find myself wondering how the liquid gets out of the exhaust system.

You've all seen exhaust systems: the muffler exit port is never on the bottom of the muffler, but always on the side, with at least an inch of muffler below the lowest point of the port. Lots of water will condense in the (initially cool) muffler; how does the condensed water get out? 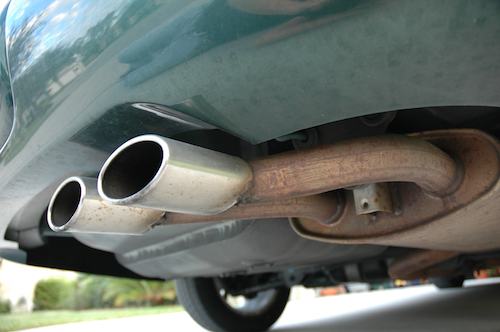 The obvious answer is that the water pools in the muffler until it's that inch or so deep, but that makes no sense to me, as there'd be a half gallon or more of water in there most of the time. I've also never heard of someone pouring water out of a muffler when changing it.

My next guess is that the car accelerating forwards causes the contained water to slosh out the exit port. But, then you have cars with mufflers mounted sideways: sloshing on acceleration clearly won't do you any good there (and I'm guessing turns won't do it, either). 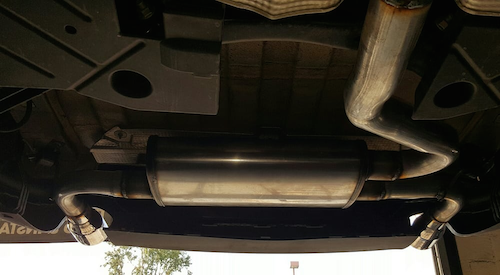 So, does a pool of water form in the muffler? And, if not, how does the condensed water get out?

If there was ever that much water in the muffler such that it was sloshing around, it would be a sign of catastrophic failure in the engine, such as a blown head gasket and the "water" would actually be antifreeze/water mix from the engine.

However, my understanding of your question is that you're interested in the normal case of a few drops of water coming out of the tailpipe. It's actually a normal byproduct of combustion. Here's the chemical equation for the combustion of octane:

From left to right, the compounds are octane, oxygen, carbon dioxide and water. (Note that real gasoline isn't this chemically simple and there are other byproducts including NOx, but this is sufficient to explain the concept.)

Because the exhaust gasses are hot, the water byproduct is in the form of water vapor until it gets to the point that it's cooled below 100C (212F). When the engine is warmed up, that water vapor doesn't condense immediately and it escapes the tailpipe as an invisible gas. However, when the engine is cold, and if the ambient temperature is cold, the gas can condense in the tailpipe and comes out in the form of a few drops. With a normally operating vehicle, there are just a few drops and after the engine and exhaust are fully up to temperature, they cease entirely because the gas doesn't condense until it's already in the atmosphere beyond the tailpipe.

Any water that happens to condense elsewhere in the system (e.g. the muffler) doesn't stay liquid for long because as the temperature rises, any liquid water is quickly reconverted to water vapor. For this reason, there's never any pooling of significant amounts of liquid in the exhaust of a normally operating vehicle.

Wow, a lot of technical discussion here - maybe it would be quicker to physically look at the mufflers on a few vehicles. On the bottom, and usually towards the rear of the vehicle the muffler will usually have a small pinhole to allow condensed liquids to escape.

Not the answer you're looking for? Browse other questions tagged exhaust muffler water or ask your own question.

38
What does a water like drop coming out of the exhaust of the car signify?

38
What does a water like drop coming out of the exhaust of the car signify?
4
How hot does an exhaust manifold get?
4
Excessive water dripping from exhaust
12
Can (possible) exhaust system damage cause random misfires?
4
Complete exhaust system replacement necessary?
4
Does water around a gasket imply an exhaust leak
0
Water resevoir has a hole. Water boils out
0
Electrical issue - Honda
1
How does water in the radiator not boil?