Coolant in the cat, can it be saved?

The catalytic converter on a 2007 Mazda RX-8 is full of engine coolant. Is there any way this can be saved or do I need a new cat? It seems to me that coolant won't melt the cat like unspent fuel or oil would, And water molecules pass through here all the time. The big worry for me is the anti corrosion stuff in the anti freeze, and how it reacts with platinum/paladium/ceramic,etc.

I was thinking maybe wash it out (pressure washer? Distilled water? soap? hold it out the window going 150? joking) and let it dry. I'd like to re-use this thing if at all possible; cats are expensive. 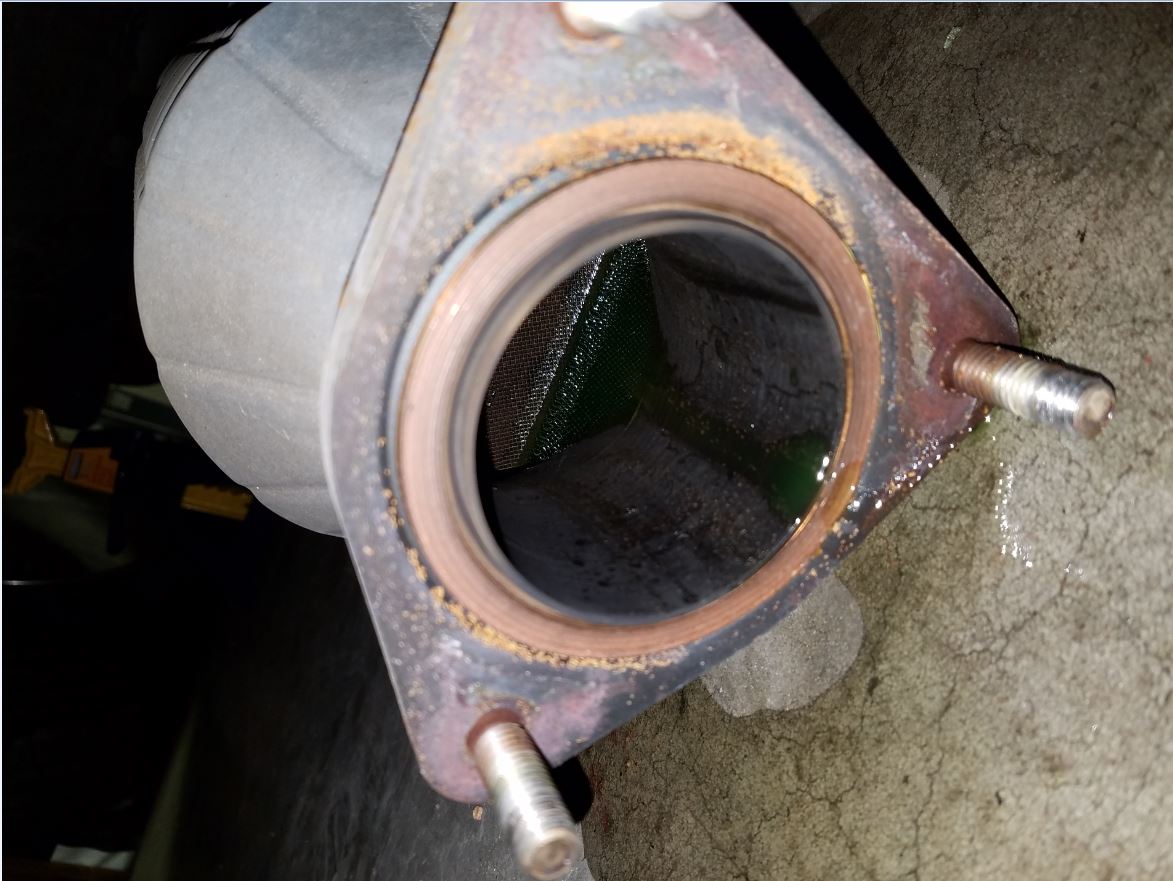 EDIT: I just ran the garden hose through it for a few minutes, both directions and let it sit in the sun for a week. It passed emissions (just an OBD check, they didn't use the little sniffer wand) and hasn't thrown any codes or acted weird. Haven't noticed any exhaust leaks. 02 sensors have looked normal ever since it finished burning all the vaseline.

The concern is valid. Liquid coolant is not of particular concern when at ambient temperature. At higher temps the Phosphorous, used as a corrosion prevent agent in coolant, is a concern. It binds with the Cerium used as an Oxygen storage agent in the catalyst substrate to form CROP, Cerium Oxide Phosphorous. This makes the Cerium unavailable to passing Oxygen. This then reduces the amount of available Oxygen to react with fuel molecules. Phosphorous does not bind with the more noble metals, Platinum, Rhodium and Palladium. Note that the above is a much simplified version of the catalyst contamination processes.

It is acceptable to rinse out the catalyst with water. Reactions to not take place below 350 degrees F. It is acceptable to use a mild detergent although it is unlikely to help much unless oil based products are present. Coolant is water soluble and should rinse away with little effort. Rinsing may also remove some of the other contaminates commonly found to be clogging the pores of the substrate which can improve catalyst efficiency. Ash is usually found in catalysts and mild agitation will dislodge some of it. This is good thing.

After cleaning dry completely before installation to avoid unlikely, but possible, thermal cracking. Install with new gaskets, confirm no exhaust leaks. Run as normal, see if the on-board tests pass or fail the converter. It is my usual practice to not give up on a converter until the on-board test sets a failure trouble code.

I have cleaned failed converters with a low pressure pressure washer in an attempt to revive them. This has resulted in a few that worked for a few more months. I do not recommend this cleaning method unless one is already committed to replacement if needed.

The catalytic converter is best washed in a solution of citric acid. One scientific study found that 80% of the damaging impurities such as phosphorous can be removed using citric acid. You can purchase citric acid on eBay or elsewhere using Google.

Many users found it works best in a warm solution, about 165 degrees F. Submerge the cat. completely, for about seven hours, swooshing it around occasionally.

Best / easiest way to deal with this, assuming that you've only just discovered this and it hasn't been sat like this for ages, is to find another car that is working and allow it to warm up fully. Then, wearing some sturdy gloves and being careful not to burn yourself, place the entrance to the cat over the exhaust of the running car. This will dry the cat out perfectly and ensure there are no nasty substances left in it.

This method also works for drying out empty fuel tanks when you want to be sure there are no combustable remnants (for example if you have to weld up a fuel tank).

Not the answer you're looking for? Browse other questions tagged catalytic-converter rx-8 or ask your own question.

10
Can a head gasket leak cause the cat to plug?

5
How much of the exhaust is the "cat-back"
10
Can a head gasket leak cause the cat to plug?
7
Locating the O2 sensors and the cat along the exhaust
5
How could the code point to a faulty cat, when the O2 signals are normal?
11
What's the purpose of having the cat right after the exhaust manifold
4
Cat Converter Replacment & Sensors
3
Trying to Understand Post Cat O2 Behaviour During a Misfire
0
Does cat removal disable check engine light?