Looking at this for a friend, the car originally had some cam or crank code (no one remembers what the original code was and it wasn't documented) so they did the timing chains. Apparently they made it half a block on the test drive before the car stalled and wouldn't start again. It'll either crank and no start or start, idle low and stall. The cylinder heads were taken off at one point for unclear reasons. So after doing the timing chains again and replacing the crankshaft position sensor, I get asked to look at this train wreck.

The battery is low, had to use a jump box to crank the engine at a decent speed. The car has been sitting for months It's unknown when this work was done. The only stored code is a p0336 (Crankshaft Position Sensor Performance). Supposedly the engine has poor compression on cylinders 1 and 3 roughly 115 and 75 the rest averaging 175psi. When the test was done is unknown, unable to confirm numbers without removing the intake manifold. Wasn't able to get a relative compression test in either, my probe has a 1/2" jaw the cable was slightly larger.

There was talk of TSBs, but searching through them I didn't find what they were talking about and they couldn't provide the TSB.

So, do what I can with what I have on hand. Taking a look at the scan data doesn't reveal anything useful. All sensors seem to be working, all 4 camshaft position sensors as well as the crankshaft position sensor report active counts without dropouts. The CKP Resync PID showed active counts, which I assume is why the p0336 is setting. The fuel rail pressure sensor shows .5 mPa matching with desired pressure.

A visual inspection of the engine doesn't reveal anything obvious. 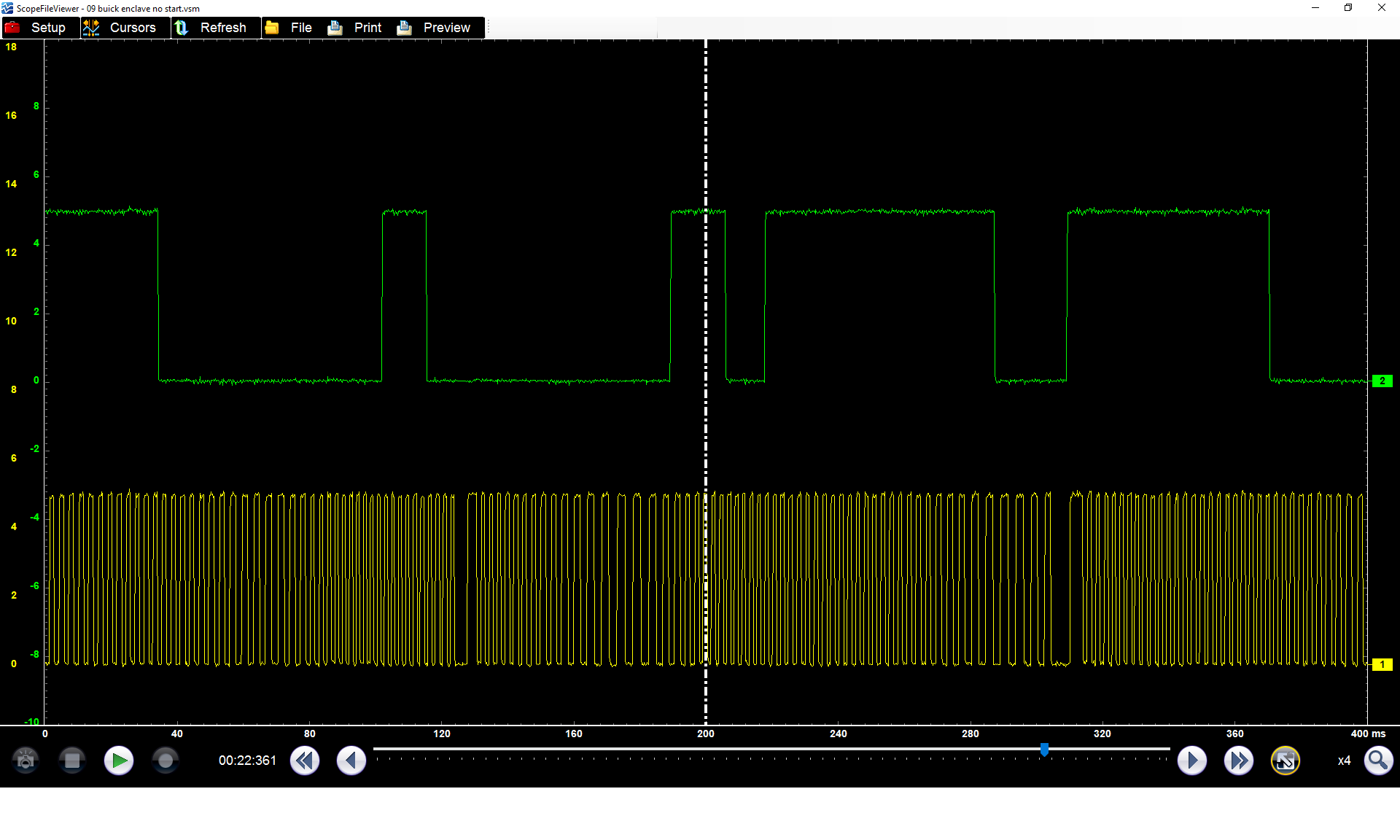 I realize I should of included bank 2 in the capture, as well as one of the exhaust CMP sensors. When I go back I'll do another capture. I was unable to find a CMP/CKP correlation or I didn't google hard enough. The signal looks consistent and doesn't drop out. I don't believe the car has a timing issue, I find it hard to believe someone could do the same job twice and screw it up both times. But, without removing the front covers or having a known good correlation it's hard to say for certain.

Injector and coil trigger signals OK. Coil/Injector ramp don't show anything out of the ordinary.

Is the above capture a good bank 1 CMP/CKP correlation? What are some other possibilities for the no start?

unplug cam position sensor #1 intake side.... found tsb # PI0090E mine would buck and go dead upon restart sounds like the timing off. unpluged it started fine. drove car ran normal while engine was running pluged it back in ran until i wiggled connector engine died.. replaced sensor and pig tail...

Not the answer you're looking for? Browse other questions tagged starting buick enclave or ask your own question.