Recently replaced the EGR valve, a bunch of vacuum hoses, and removed & cleaned the throttle body on my 2000 Nissan Frontier (manual transmission). The entire vacuum system was clogged with carbon due to the EGRC-BPT valve leaking exhaust gasses.

But now when I push the clutch pedal while coasting, or coming to a stop, RPM fluctuates back and forth between 1200 rpm and 1800 rpm, for about 3 cycles til it stops.

But the weird thing is, it doesn't happen if I rev the engine while stationary. Only after the engine has been under load. As soon as the load is removed (pressing clutch pedal), it starts to fluctuate.

The comments are correct.

I would start by cleaning the item in the lower right in the diagram below from underneath the intake plenum. Remove it completely by disconnecting the electrical connector, and the unit is usually held in by a few small screws/bolts. Try not to break/cut/destroy the gasket, but be ready to replace the gasket as it must make a perfect seal to avoid vacuum leaks.

This may be easy or a total pain; I'm too lazy to look up the flat rate.

Clean all areas and passages you have access to.

... Don't use this toothbrush on your teeth anymore as it will taste super icky. 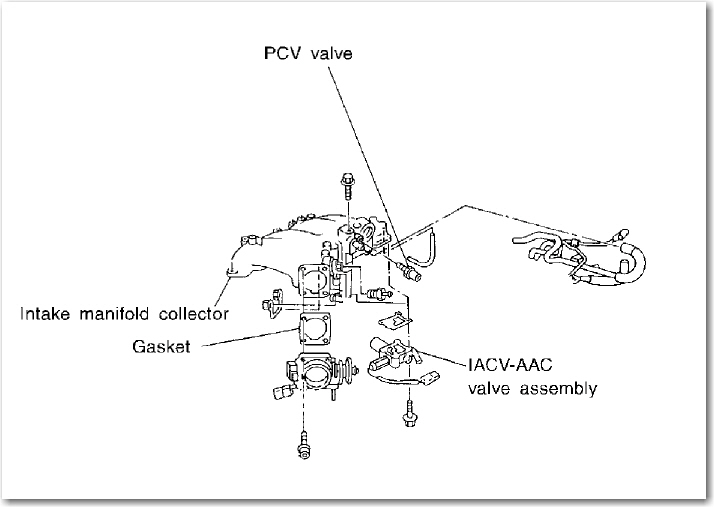 Did you replace the EGRC-BPT valve? Also, you might swap in the old EGR valve (or a different one from another manufacturer) because I was once sold the wrong part number for my EGR valve.

Did you check the EGR passageway for clogs? If the EGR valve was functioning improperly, chances are the EGR tubing was carbonized. I had to clean mine out with carburetor cleaner when I replaced the EGR valve.

Test the EGR system. Remove the vac. hose on top of the EGR valve and connect a piece of spare hosing to it. With engine off, suck on the end of the hose until you hear it open; hold for a few seconds and there should be no loss of vac. pressure, no hissing sound; release and you should hear the EGR snap shut with a definitive metallic "click." Next, start engine and again suck on the test hose to the EGR valve at idle; the engine should stall immediately (if not the EGR passageway is clogged and needs cleaning with carb. cleaner). Rev the engine to above 2,000 rpm and feel the end of the disconnected hose that ordinarily connects to the EGR valve; you should feel good suction at 2,000+rpm, but none at all at normal idle. If it fails this last test, there is a problem with the DPFE, its hoses, or EGR vacuum solenoid.

Check for air leaks in the vacuum lines and induction system. Use an inexpensive propane torch to apply raw propane (unlit) around the hoses and intake manifold. If at any point the idle rises, you have found the location of a leak.

The car sounds as though it is running lean. When was the last time the car had a general tune-up?

Not the answer you're looking for? Browse other questions tagged nissan fast-idle frontier or ask your own question.