While changing the brake pads on my 2003 Subaru Forester, I found two balls of what appeared to be rust mixed with either oil or grease in the metal 'cup' of one brake caliper piston (picture below). The balls yielded like clay when squeezed between two fingers.

My guess would be that some drops of oil/grease got in, and rolled around picking up rust like a paper cone in a cotton candy machine. But the piston must make a reasonably tight seal against the brake pad, which in turn leads me to suspect that the source of the 'grease' component would be the calipers leaking. I didn't see any signs of active leaking to support this.

Has anyone seen this before? Any idea what it might be? The rust indicates that moisture gets in there, but surely there's not enough space between piston and brake pad for oils from the road to slosh in? 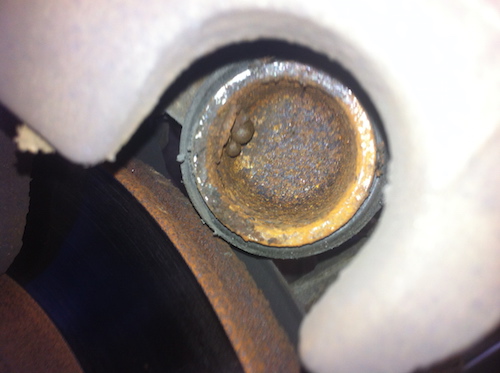 Yes, we see these sometimes. The source of the grease is anti squeal grease applied to the backing plates of the brake pads. It is very viscous to begin with and then stiffens further with time. Bits break off and then rock back and forth in the bottom of the piston cup with each stop start cycle. It mixes with the particles of rust in from the piston cups This then forms the balls. It is interesting but benign. It is not a sign of brake fluid leakage, it is not viscous enough to form the balls.

Not the answer you're looking for? Browse other questions tagged brake-calipers or ask your own question.