I have a 95 GMC Sierra 5.7 it suddenly overheated one day and the upper radiator hose busted. So far I've changed upper and lower hoses thermostat and water pump and flushed radiator. All new parts put on yesterday Truck is still overheating and not getting water flow from radiator. I removed thermostat completely to see if water would flow through and nothing it just stays in radiator. I'm completely lost and radiator is only 7 months old

I'd agree with Paulster2 that you don't have enough coolant in the system. One thing I've found extremely helpful in getting cooling systems properly filled up is one of these Lisle 24610 Spill-Free Funnels. I think I first saw one in an EricTheCarGuy video: 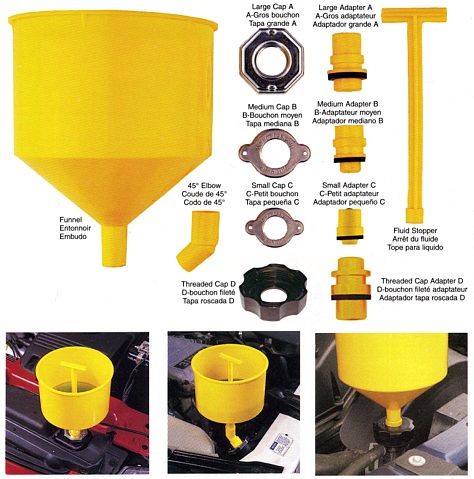 Basically, it let's you get the coolant level higher than any other part of the cooling system, and you can run the engine with it connected to help get air out without worrying about spilling coolant all over the place. There's a nice thread here that talks more in depth about it.

More for other readers than the OP, but I found this thread by asking "New Water Pump Overheating".

I've got a Chevy Blazer with the 4.3 V6, and right after replacing my water pump, I filled the radiator ('til it seemed it wouldn't take anymore coolant), cap'd it, and then started her. The temp climbed quickly and I sensed something was wrong when it reached operating temp but kept rising. So I killed the engine, came inside, and found this thread.

Indeed...returned outside, removed the cap. Bone dry. So I drove up onto the curb (I currently live in an apt) to get the radiator cap at the highest point, topped it off, started it, and gradually added fluid until it seemed truly couldn't accept anymore coolant.

That did the trick. I was afraid I either installed a bad water pump (like the OP) or some other kind of worse.. This was a useful thread so I wanted to add my similar symptoms and confirm the solution for any other passers-by.

Not the answer you're looking for? Browse other questions tagged cooling-system overheating gmc sierra or ask your own question.