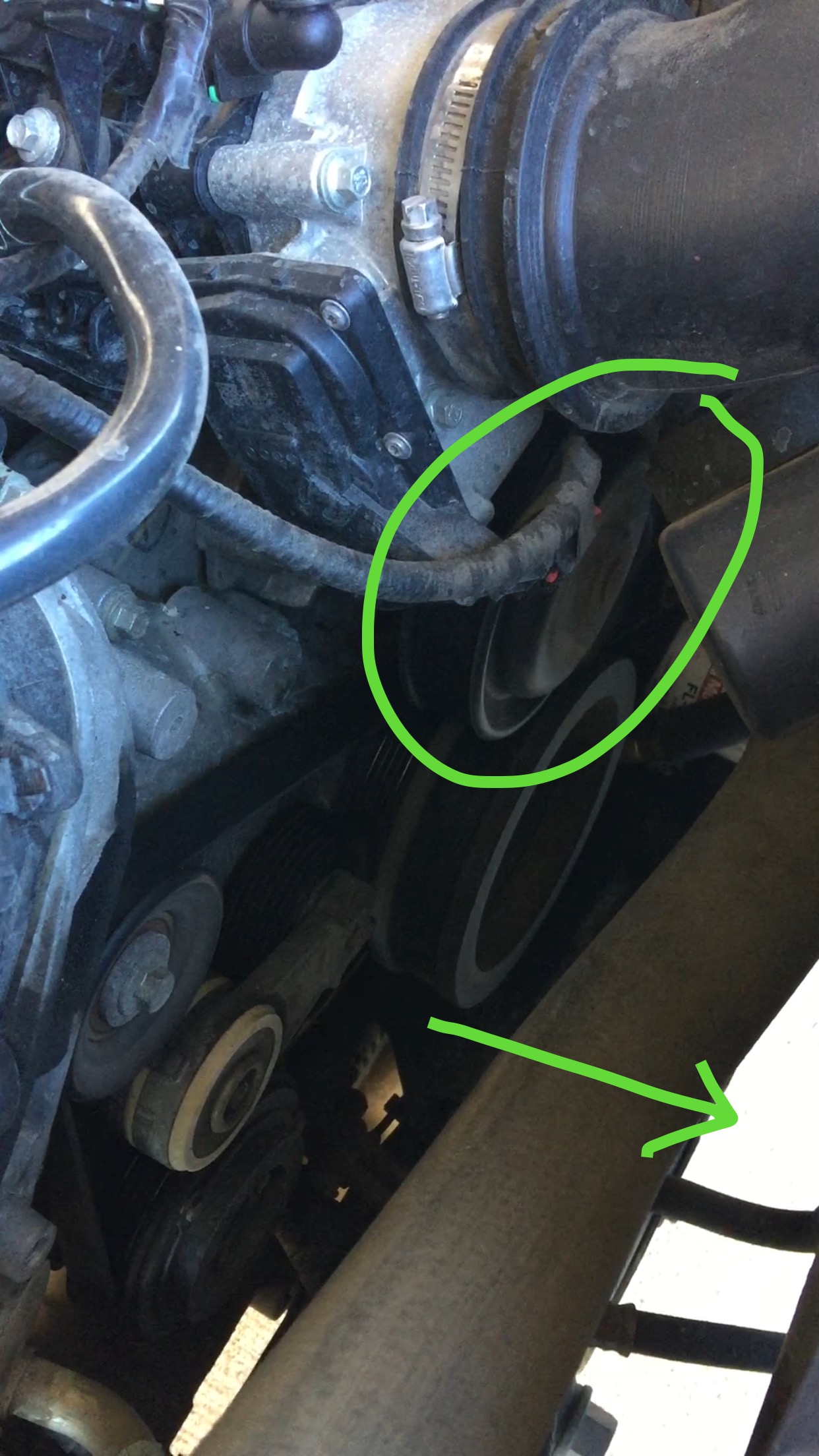 I drive a 2011 F-150 with the 5.0 motor in it and after cranking it up this morning it's driving fine but the circled pulley at the front of the block (with arrow pointing towards the front of the truck) is wobbling rather aggressively and making a rough rattling sound. I've had the belt squeaking for a few days but assumed that was just grease or something on the belt.

It drives smoothly, but the noise and play in that wheel are very concerning, considering it's very cold (for Texas) and that I have to drive an 80 mile round trip first thing in the morning.

My question is as follows: what is the name of this component, what might cause above symptoms and what are the odds that driving on it tomorrow morning will hurt it or leave me stranded?

I'm not familiar enough with that engine to say for sure, but the circled pulley might be the water pump. The wobbling is not a good sign, it indicates that a bearing is failing.

There are four accessories that are likely to be driven by a belt or belts at the front of the engine:

The final possibility is that that is either the tensioner or an idler on the serpentine belt. If either of those fail, you're likely to loose all of the accessories driven by the belt. The tensioner will be on an arm that allows it to move and keep the belt tight. Idlers will just be there to change the direction of the belt.

Most likely the problem is with the water pump. It would be risky to drive with it in the condition you describe, but you might make it. If the pump fails you may loose coolant or coolant circulation (or both). You'll probably first notice the loss of circulation as a loss of heat. If it starts leaking you may smell as sweet smell and notice the temperature going up. Carry extra coolant with you if the problem is with the water pump.

Another thing to be concerned about is the other accessories driven by the same belt. If the wobbling pulley fails you may loose the others as well.

That is the water pump I just changed one on a 2014 with a 5.0 and if the pulley is wobbling that means the bearing r bad in the water pump

Not the answer you're looking for? Browse other questions tagged engine ford troubleshooting part-identification f-150 or ask your own question.