Sound of air leak during kickstart and during engine running?

The bike is a Hero Honda Splendor Plus. When riding the bike I noticed a "Tshch" sound which I estimate happens immediately after the compression stroke of the engine. I took the bike to a local mechanic who removed a couple of tubes near the engine while having the engine running, but he couldn't figure out what the problem was. He did say that it seemed like there was an air leak somewhere and that it would go away after I rode the bike for a while. After riding the bike for a while it did seem like the sound stopped, so I assume it was because of any of the metal pipe's shrinkage during winter which gave some gap for air to leak.

Today morning I noticed that when I raised the kickstart lever to start the bike, if I just pushed the lever down by 2 centimeter with my foot, I could hear the "Tshch" sound from somewhere near the engine. Brought the lever back up and moved it 2cm down and the sound could be heard again.

What in your opinion might be the possible causes of such a problem? Images of the engine area are here: Troubleshooting fluid leakage onto the engine area? 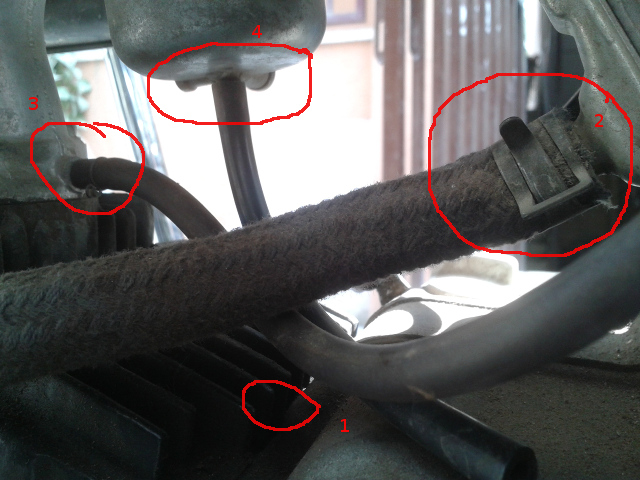 I can see why the mechanic couldn't figure it out. It's hard to locate the source. At first the sound seemed to come from point1 in the picture. Then it seemed to be from point2. Then it seemed to come from the general area between 1, 2, 3 and 4. I need to debug this like how I debug software. Is it safe to yank out any of these tubes, plug them with my finger and push the kickstart pedal to check if the sound still exists?

If it really is only audible when the engine is at its compression stroke or the subsequent power stroke, in theory these are the only possible options:

If you turn over the engine slowly, like when pushing down the kickstarter slowly, it's not uncommon to hear air leaking past the valves or the piston rings. That doesn't have a significant effect when the engine operates at normal speeds. I'd check if the compression is up to spec, it gives a little more insight in the situation.

The spark plugs are seated correctly you say. An exhaust gas analyzer at the local garage will tell you if the valves are leaking(high HC reading I think), when that is not the case, the piston rings and the head gasket are left. If it's the head gasket I suppose sooth marks should be visible somewhere around the gasket, and your coolant would get contaminated with oil an such. Then only the piston rings are left. If the compression looks OK, don't worry. If the compression reads too low, it's time to replace your piston rings.

OP Editing the answer to add to what was found to be the problem: 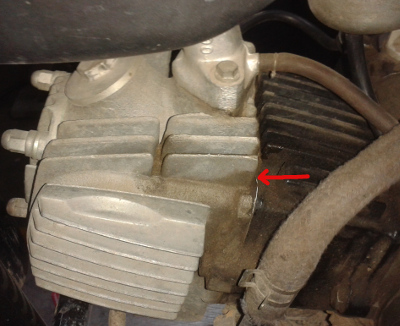 The red arrow points to where the sound originated from.

You estimated the problem and the cause correctly. The head gasket was damaged, and it was damaged exactly because they didn't replace the gasket with a new one after doing the engine head cleaning. The service person at the authorized service center today listened to the sound of air leaking and immediately concluded that the gasket was the problem. He admitted that it is the first time he's ever heard such a sound though, and proceeded to move the kickstart levers of other bikes just to check for such noises. The dismantling was done in front of me, and this is what the damaged gasket looked like: 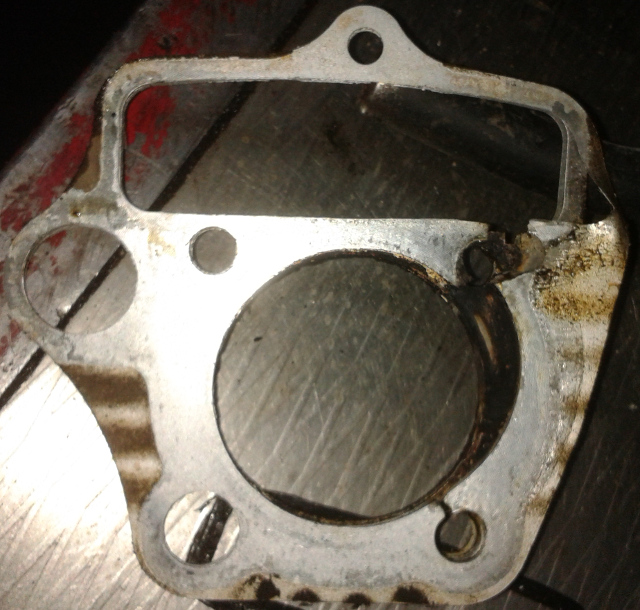 No body said nothing about the crank seals pushing or shoving air .that's not to be overlooked. Also makes a 2 stroke difficult to start as well . On my 86 yz.250 s rite at the base gasket where the arm from the governor leads up to the power valve ,I heard air pushing or sucking.i tore the jug off and the base gasket was not damaged ? I thought I would find it blown out in that spot but it was good. I changed it anyway but it still pushes out and collects a spot of dust around that base area ..maybe the arm to the power valve oil seal is the culprit.. it's the only thing else down there regardless if you have a crank seal or some type of air leak it will make your engine so lean. If it s really a bad leak, your piston will start expanding to where it will scratch and score the piston walls and can and will eventually sieze..this is on a 2 stroke I'm talking now... but it's not good if you hear air in most cases.if that head gasket is 100 percent unavailable, you make one or ,,,,,the other, use the old one and see, look what happened to their mechanical reputation ...itsl shit now. You'll never forget that they tried to skip a step at your expence and inconvenience. Hope they get to eat that .and learn something too.

Not the answer you're looking for? Browse other questions tagged honda motorcycle noise hero-honda or ask your own question.

3
Bottom piece of spark plug broke off in motorcycle engine
2
Engine oil leak from motorcycle
3
“tick-tick” sound in Enfield Clasic Motorcycle
5
Honda CBR 250 won't start after heavy rains, puttering noise
7
Can I Mount auxiliary lights for Hero Honda Passion 2002 bike?
1
Where do the intake/outtake tubes go on a motorcycle coolant reservoir?
8
Troubleshooting fluid leakage onto the engine area?
0
My bike bike Suzuki Fiero (2001 Model) missing and jumping, reducing power when riding in rain
0
I drove my bike without engine oil for 100kms at 80kmph after which it made a shrieking sound and stopped