Why is my car hard to start only after a few hours?

I posted a question related to this but might not be the correct issue: Do injectors leak or injector seals leak?

2 months ago (1200 km) I performed a manual carbon clean of the intake ports to remove carbon build up (to get a tiny bit more performance).

I also changed the spark plugs while at it.

To clean the ports, I used Liqui Moly Fuel System Cleaner, which dissolved the carbon build up, and I scrubbed and sucked it away. I didn't removed the fuel rail or injectors, but some of the cleaner/gunk flowed down past the injectors onto the middle of the "V" (which I cleaned up, but some left stuck in injector support)

A few weeks later, after a 30 minute drive + 2 hours leaving the car off, I went to start the car. It cranked a lot more than usual, and limped it's way to starting. Normally it springs to life like any car. I didn't notice the issue again, until...

Last week, the same issue happened again, multiple times, with longer cranking times. Only after a few (1-2) hours. It starts fine cold, and starts back up fine within ~30 mins. I sometimes smell petrol, but not after start up and driven for a bit.

Thermostat was changed 2 years ago. 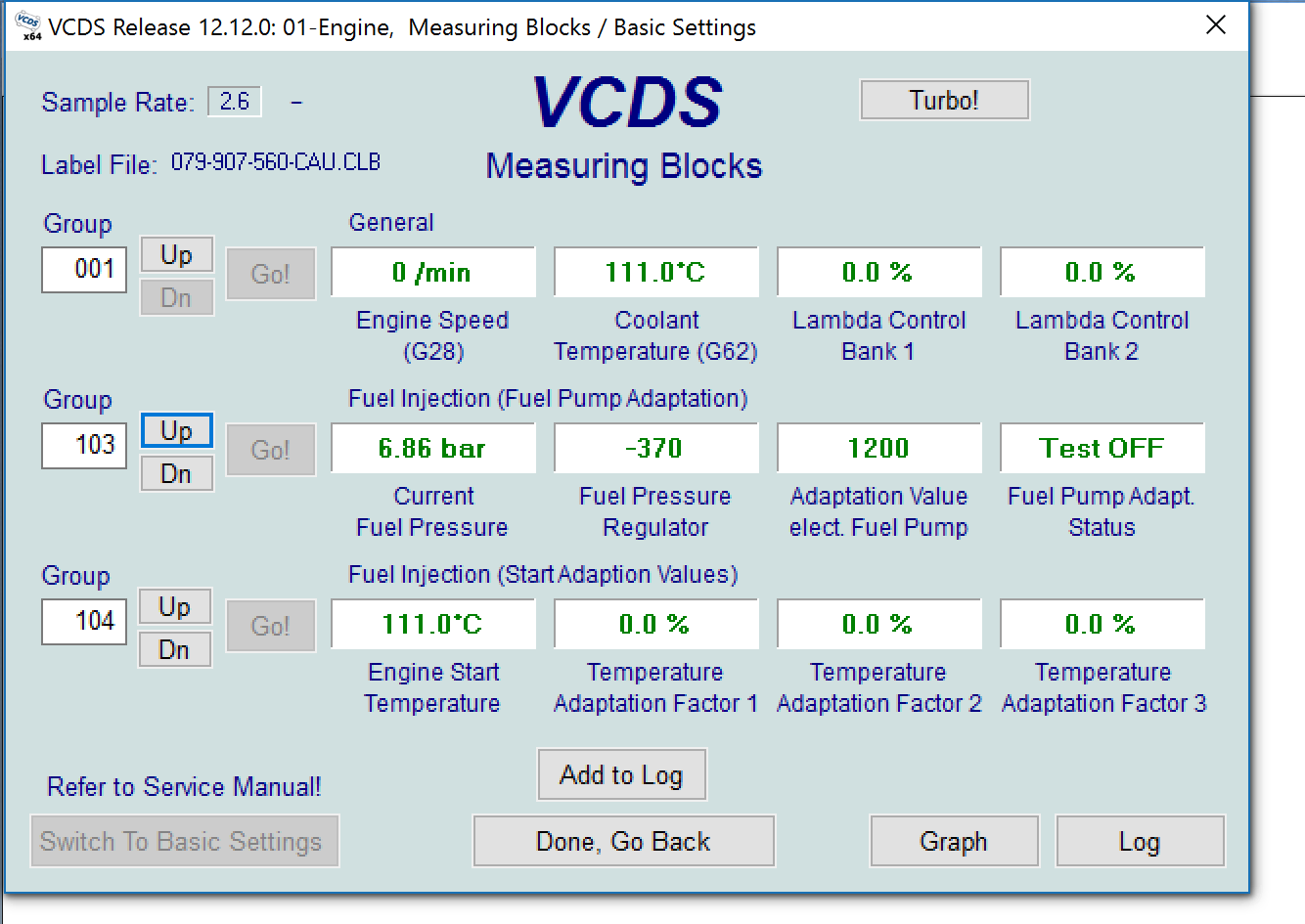 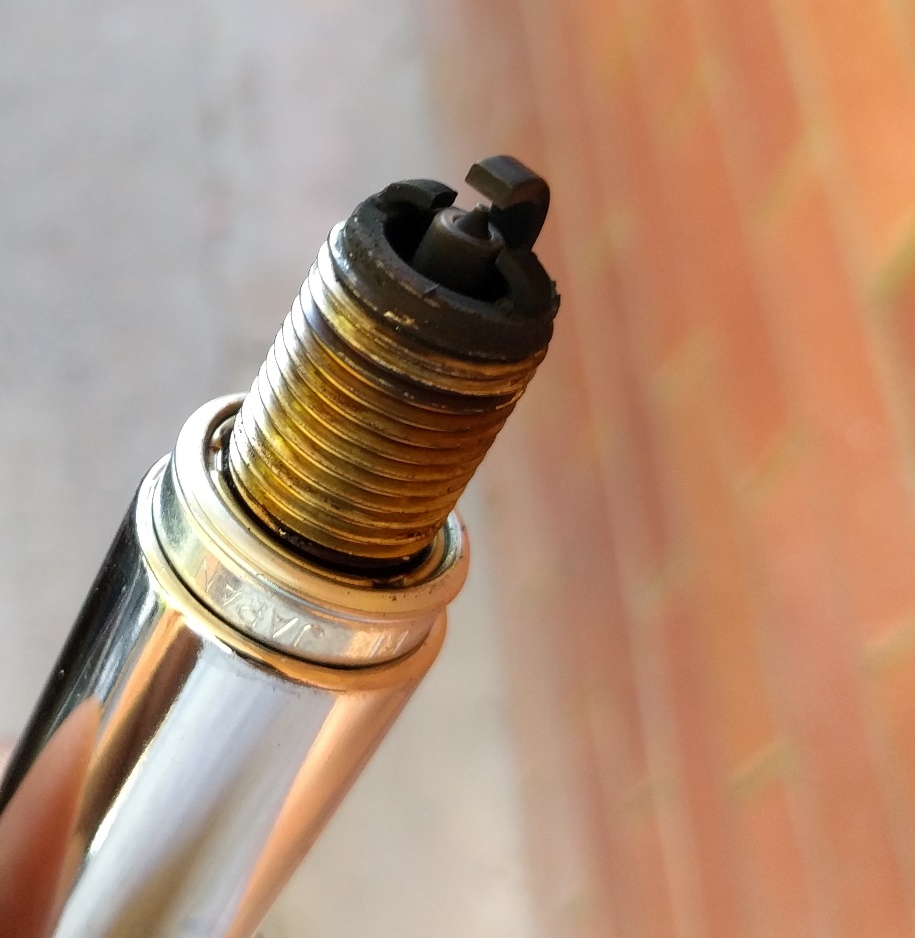 Does this sound like an ECT sensor issue, a fuel injector leak, or something else? Obviously changing the ECT sensor is 100x as easy, but if it's not broken I'd rather not touch it.

Fuel Rail Pressure was around 6 bar when off (25 bar when on, 70+ bar at WOT), it remained this even after 2 hours (I'm guessing it primes when you turn on the ignition)

I believe this is the root of your problem.

The fuel rail needs to maintain a certain pressure so that the vehicle can start up with the engine hot.

If the pressure isn't high enough, the heat from the engine will start to "boil" the fuel, making it difficult to start (think vapor lock). If you crank the engine for long enough, the fuel rail may be able to build up sufficient pressure to overcome this condition.

That said, here's a shortlist of possible culprits:

Pull all your spark plugs, careful not to mix them up in reference to which cylinder they were IN.

Are ALL of them as BAD as That one you show us here?

IF that plug is the darkest, IS IT FROM THE CYLINDER that your FUEL PRESSURE REGULATOR gets its vacuum suction from on the INTAKE RUNNER feeding that dark over fueled spark plug. HINT undo the vacuum hose from the intake IF IT IS ON THAT PLUGS INTAKE RUNNER..Smell Raw Fuel in its hose? SEE any raw fuel drip from that hose..Thy Fuel Pressure Regulator..some have a thin rubber diaphragm & vacuum sucks IT Back further as thy throttle OPENS & airflow increases as RPM's Rise..which opens up a larger passage inside the Fuel Pressure Regulator.. FOR MORE FUEL or Fuel PRESSURE to Flow.. and IF the Diaphragm fails, It doesn't toss a CODE..well IT WILL but not until you get a dead Miss right after tha plug Fouls out from over fueling it obviously HAS from what i see in Your spark plug photo here.

If all the others look cleaner.. Tahhh Dahhhh.

If not, it could be a clump of rock hard CARBON you had coated all the way around an Intake Valves SEAT only got melted/cleaned in 1 spot..so the rest actually still has the valve seated except for in 1 tiny spot = hard start after she warms up. logic states.. What else WON'T toss a Code but makes my car engine hard to start after reaching running temperature?.. not MUCH. and a failing Fuel pump WILL ..but the plug sure WON'T be THAT overly Rich with Fuel like Yours Is.

Are you SURE you didn't split just the END of a tiny vacuum hose at the end where IT slips over its fitting at the intake OR most importantly: where IT fits to a Thermostatic type vacuum CONTROLLED gadget..that only OPENS once the engine is at normal operating temp..causing a VACUUM LEAK only when its warmed up= & harder to start than when its COLD and the split or left unconnected Vacuum hose wont create a vacuum leak.

So a split end on a rubber vacuum hose or leaving a tiny one OFF while fumbling around with the engine.. THAT will cause an engine to run RICH when a 02 sensor smells more air than IT Recorded going through the intake boot into the engine..the fuel control system is ignorant and only preset to Dump Less fuel OR more fuel into thy MIX.... NOT ACTUALLY CORRECT IT LIVE here in the real world (as it should) ~ Which Will Not toss a CODE immediately..and THAT will create your harder to Start *symptom..once she reaches normal operating temp too. one other thing.. I dig the way you think .. its great to see good diagnostic theory working to eliminate the few things down to get to the ROOT of thy problem.. because Band Aiding things never Cure thy ROOT of a engine not up to par in performance.. it merely resets the ROOT to create thy same problem AGAIN Later on. (like your 02 sensors that will soon toss a CODE IF she continues to run that RICH much longer..which a empty Windex container to fill with water..spray MIST into thy intake.. to Steam Clean those filthy black coated 02 sensors clean so they can READ correctly again..that is a sweet FREE Cure too). but keep in mind.. seek asking WHAT Few Things can cause an engine to run rich that wont toss a CODE! Seek and yee shall Find

NGK is backwards with heat range, meaning the lower the numeric digit is, the hotter the NGK plug is. This is unlike every other spark plug where you get colder in heat range when the number is lower.

So if you seek a band aid till you figure the problem out.. place a hotter plug in just the holes that show carbon deposits on the plugs, so it won't foul like the cold plug originally rated for your engine will once the car has aged or has high miles. Bending thy rules works too, with today's economy, we bend.

PS! A loose clamp on the tube at the intake from the air box could cause that too, as could a cracked tube between the air box and the intake manifold. Because all the air entering must be measured by the mass air flow sensor (MAF, the box that you see between the air filter box and the intake manifold). IF it sucks air in through a cracked tube or a loose clamp after the MAF which measures all the air entering thy engine, it creates a false lean condition which the O2 sensors read as lean, but due to the fact the engine isn't lean, and its just a leak in the intake tube, once it richens the ratio its programed to a set given amount, IT BECOMES WAY TOO RICH, and you see carbon build ups, like that plug in your picture!

Not the answer you're looking for? Browse other questions tagged audi fuel-injectors hot-start s5 ect or ask your own question.