Is it possible to replace the touch-screen nav/climate/audio system with the non-touch, non-GPS version? My research tells me the wiring harnesses are (very) different. Has anyone successfully made this swap?

I have a 2006 where the climate and radio controls are integrated into the STUPID navigation system. I'd like to remove the screen altogether. Radio controls don't worry me, but climate would be inoperable without the touch screen. I really hate clicking through a menu and tapping a bunch of buttons just to change vents and tap 20 times to get the temp to max out (for example). [I assume the answer is to buy an older truck. What was forward thinking in 2006 turns out to be a really annoying tech fail in 2016].

Every web site said it was impossible. It is possible though, and surprising simple in theory. I successfully converted my 2006 GX470 from navigation to non-navigation with an after-market double-din stereo head unit. But, the process requires specific parts, and some specific steps. Because mine happened over almost a year, with much trial and error, I will have to update this post as I recompile it from my notes and fading recollection. These steps are specific to the 2006 (and I believe 2005 and newer) GX470, in the USA. 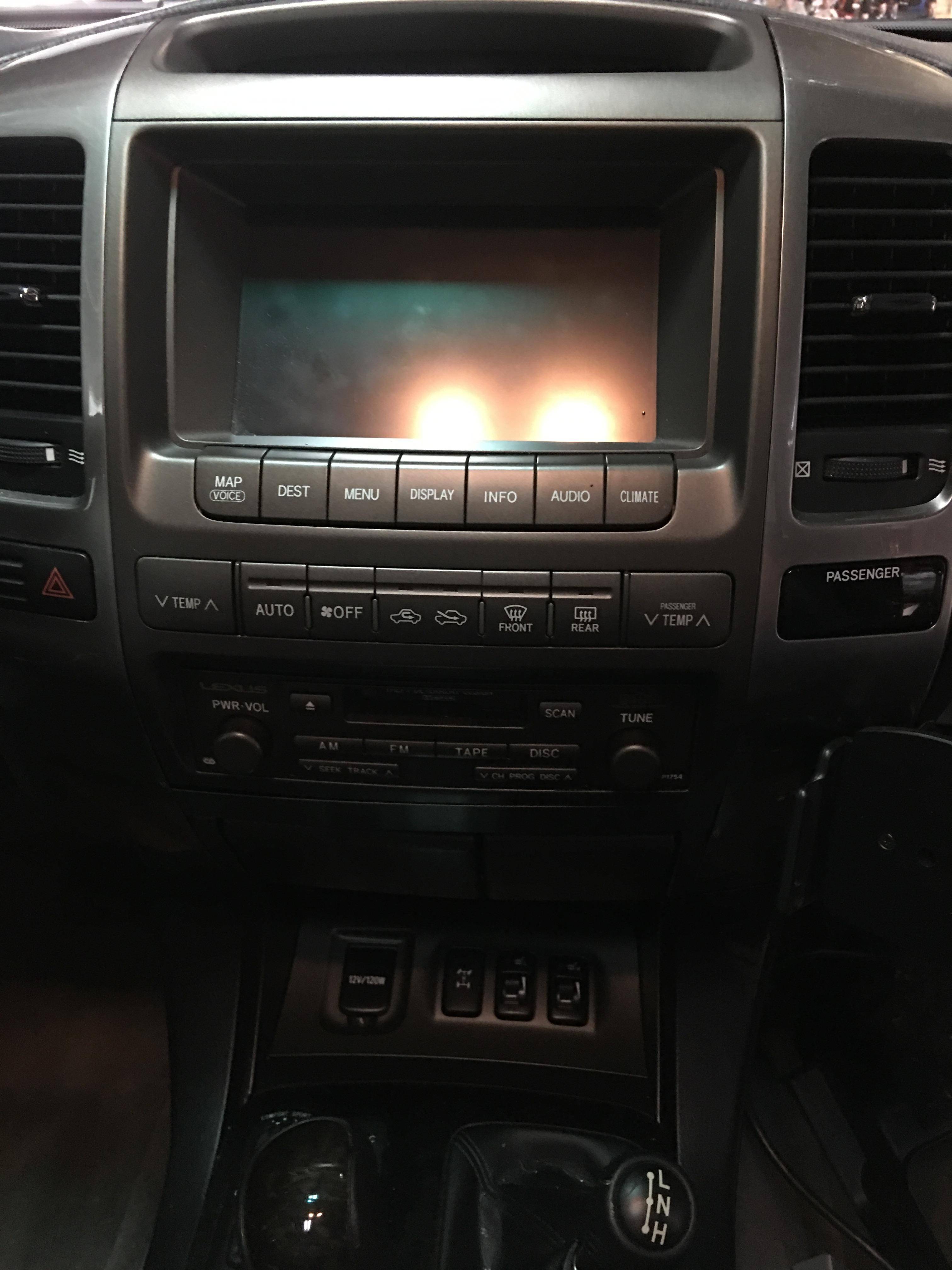 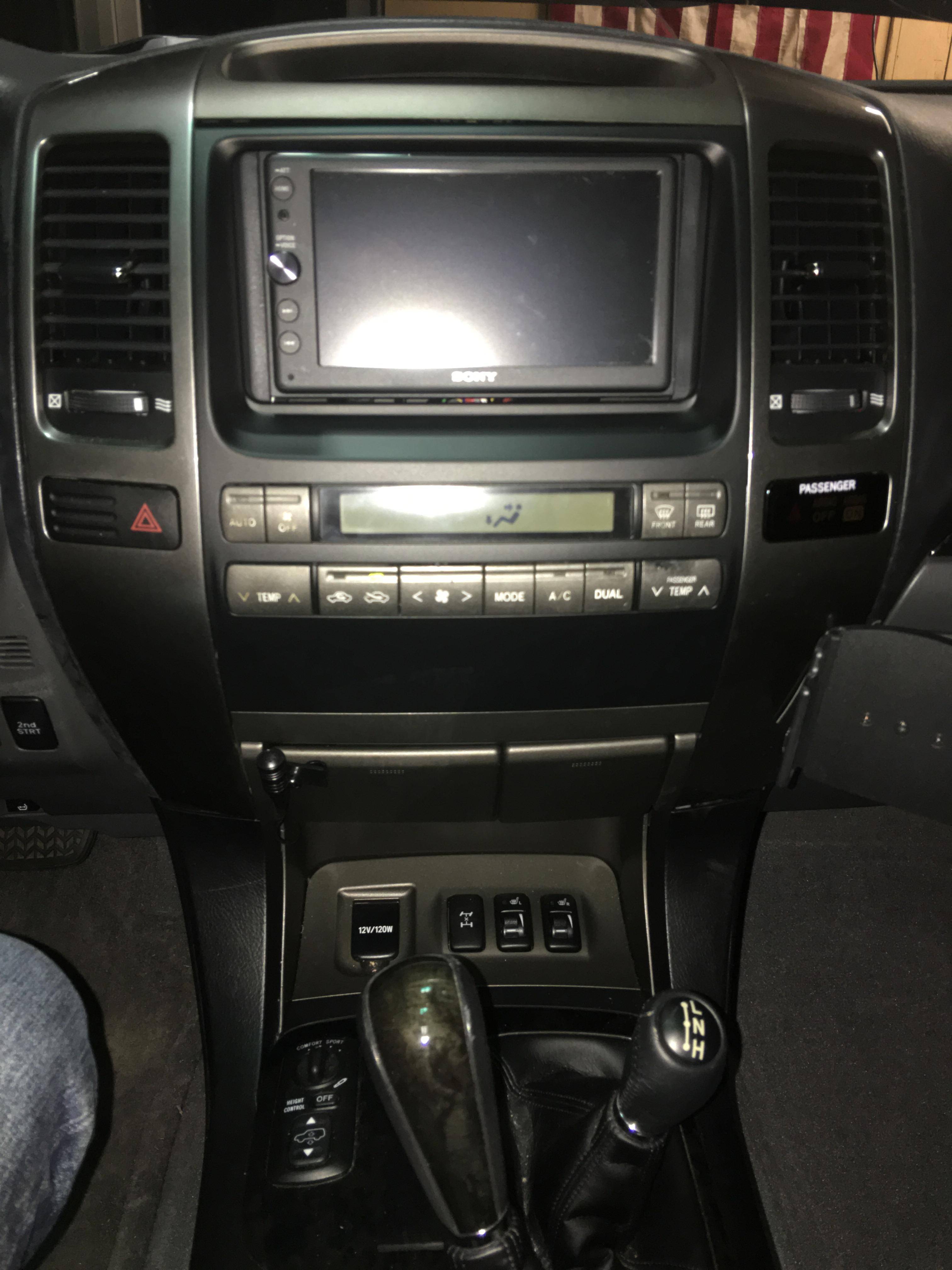 Save yourself heartache and just buy a new one, for your exact model GX. $1300 will sound painful up front. The navigation unit controls the HVAC via the touch screen. All those signals are converted to the analog signals the non-navigation HVAC controller would normally send to the computer, heater, AC, and various motors. In 2005 the wiring changed. Don't believe all the ebay junkyard resellers telling you the 2003+ HVAC controllers will work. They look and fit the same, some of the wiring outputs are subtly very different. Taking them for granted and not precisely comparing the 2003 and 2005 wiring diagrams resulted in a solution that almost worked. Except the AC wouldn't cycle, and turned out the signal was positive where it was later negative. A royal hassle in the end. Turns out you really just need to order the 2006 (or your year) HVAC and suck up the $1300 cost. No junk yard is going to have an 05+ HVAC unit because very few were sold in the US. I tried both an 03 and 04 before I really dug in and looked at the wiring diagrams. I found https://www.lexuspartsnow.com/ to be reliable, and shipped from a dealer relatively local to my geographic area.

The navigation-model rails don't fit. Google the part numbers. Get the ones for the non-navigation GX. I recall it being kind of a guess from looking at the diagrams. It'll be obvious what's wrong if you try to fit the old ones to the new HVAC controller.

(don't bother with the included wiring harness. There won't be any of the correct audio wires or harnesses around to make it work. Even if you think the harness fits, the wires are all different coming out of the MFD to the audio computer. This whole conversion process commits you to an aftermarket head unit, I believe).

Overview: It's really not that bad in theory. In practice, it requires some serious patience. Under the passenger side kick panel are the three white connectors you need. In the non-navigation model GX they would be in the dash. In the navigation model they're way down in the front right of the cabin, plugged into the computer (which among numerous other heavy metal boxes) you can remove in the course of this process. The goal is to move those three connecters to the dash. Mostly they can be cut out of the main wire harness and delicately pulled up, except for a six or so wires. There are also two wires for the lighting that have to be spliced from a harness coming out of the MFD.

Stand by for the worst web interface of your life. If you think you created an account and it's not working, wait for a week day to talk to a human. I'm pretty sure the account creation process is manual so if you think you're going to do this on a weekend, get this account created during the week. Even then, don't use a password you use elsewhere, this site's technology seems so old, it'll surely get hacked by a bot. Some have said you have to have Internet Explorer to even get it to work. I eventually got it to work in Chrome on a Mac (I think, but at one point I had to use a Windows VM to even log into the site).

If you want to convince yourself this will work, plug the three white harnesses into the new heater controller (down on the floor). And start the car and see if you can control all the HVAC functions. 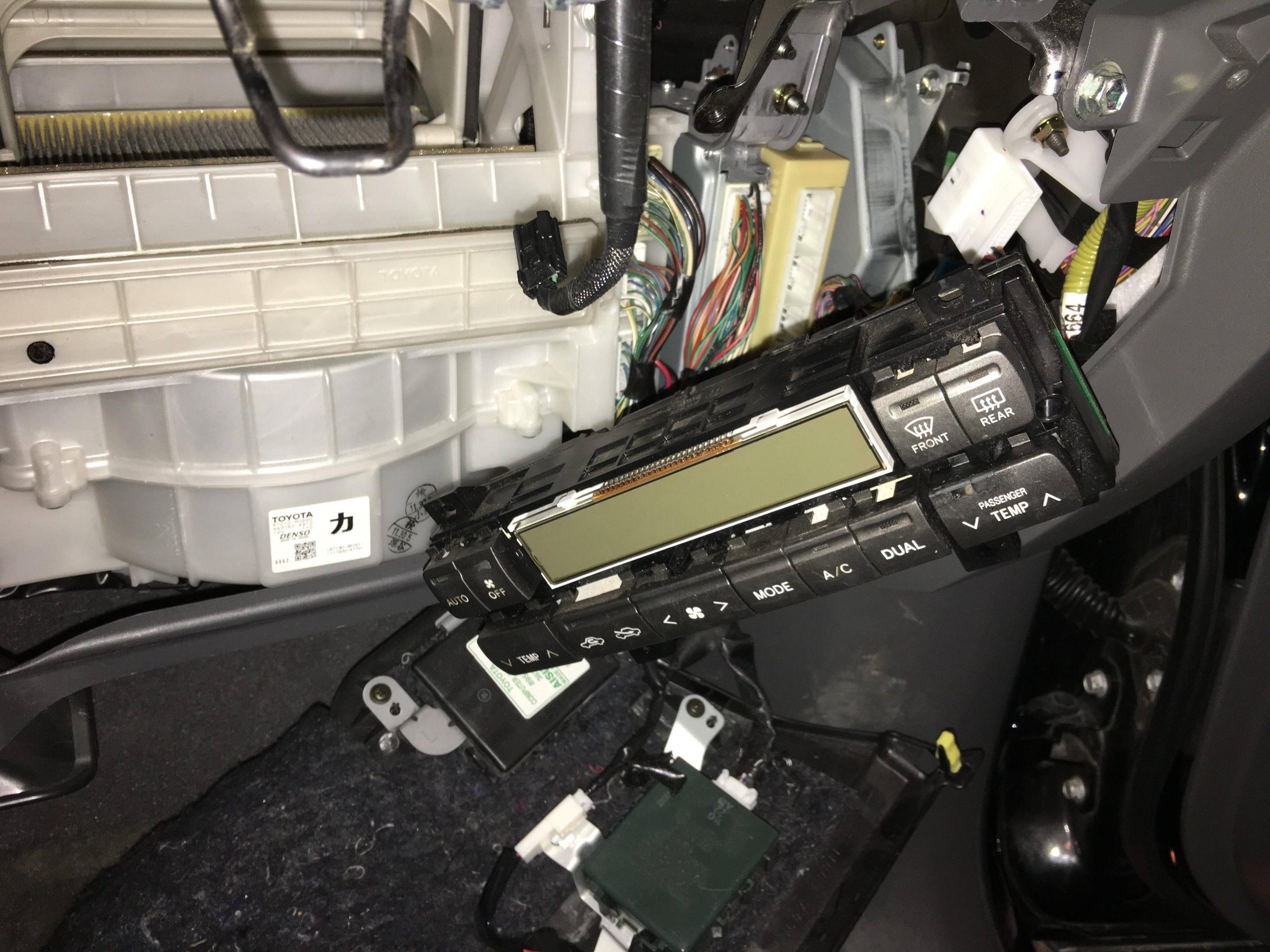 Remove the LCD. Remove the auxiliary navigation-only HVAC controller. Remove the CD changer (very helpful for accessing harness routing. Remove the analog to digital converter box (that the three white harnesses are plugged into on one side and the harnesses to the LCD (AKA multi-function display (MFD)) are plugged into on the other side. There's a second navigation computer on the other side of a rack that's more work than it's worth to remove, but will be dead weight also after this. Remove the passenger seat and pull out the multiple boxes there with the mapping DVD drive and audio-related amps and computers (navigation audio routes through the front left speaker I think, so audio wiring is all over the place).

Warning: This is the royal pain. Everything else is not too much harder than installing your own car stereo. If you've never done that before, this may be more project than you want to attempt. The risk is you screw up the wiring going to the main computer and the car won't run right. All the wires going to that computer are bundled with the wires you're going to need to separate from them to relocate those three harnesses.

Most of the wires in the three harnesses can be painstakingly separated from the main vehicle harness running up from the kick panel, above the glove compartment, and to the center of the dash. About six (if I recall, all the same color) wires are too short. As I recall they were mostly all the same color. Potentially could all lead to the same power bus, I didn't take the chance and cut and extended all to the dash with spliced in wire. 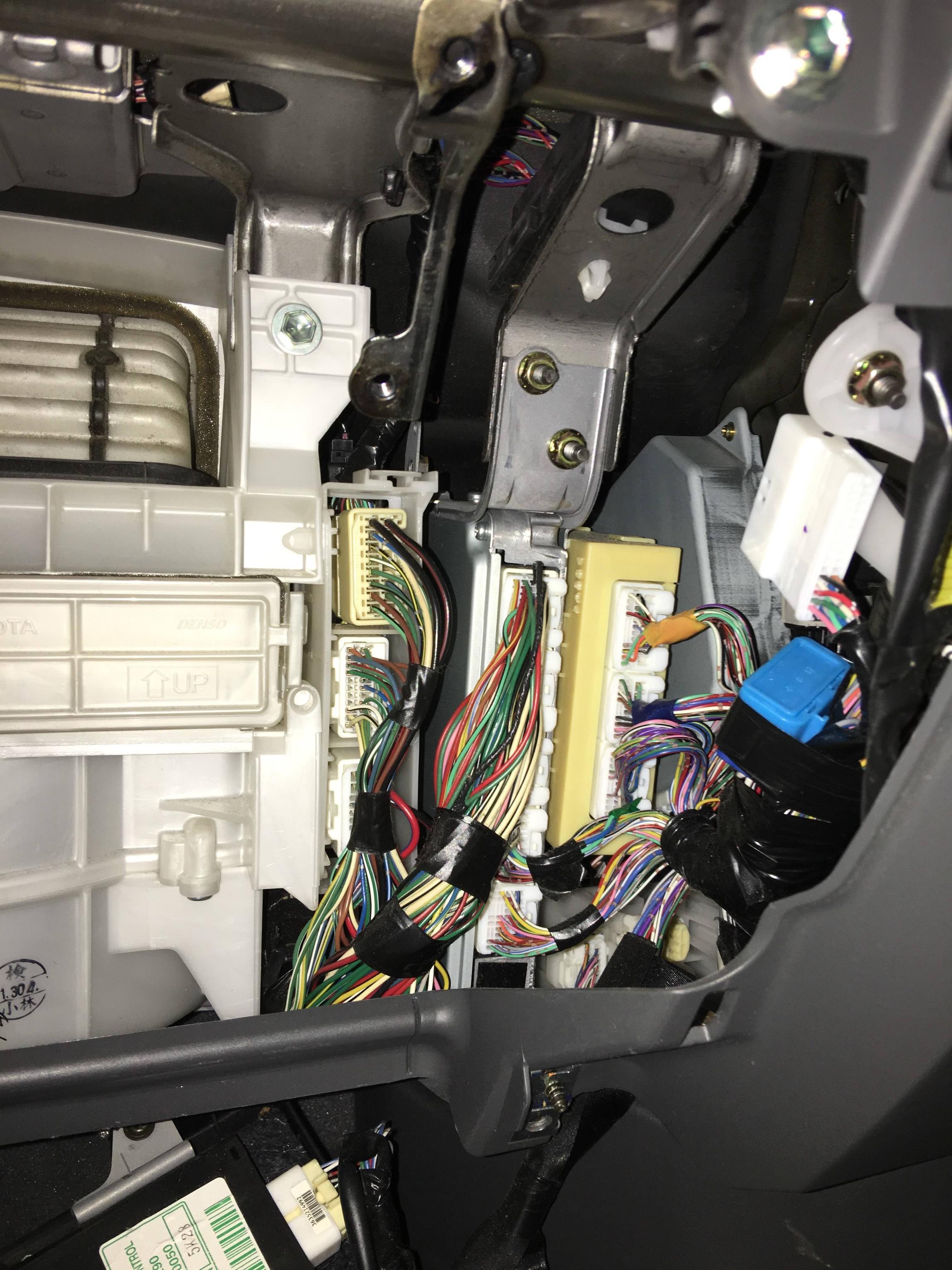 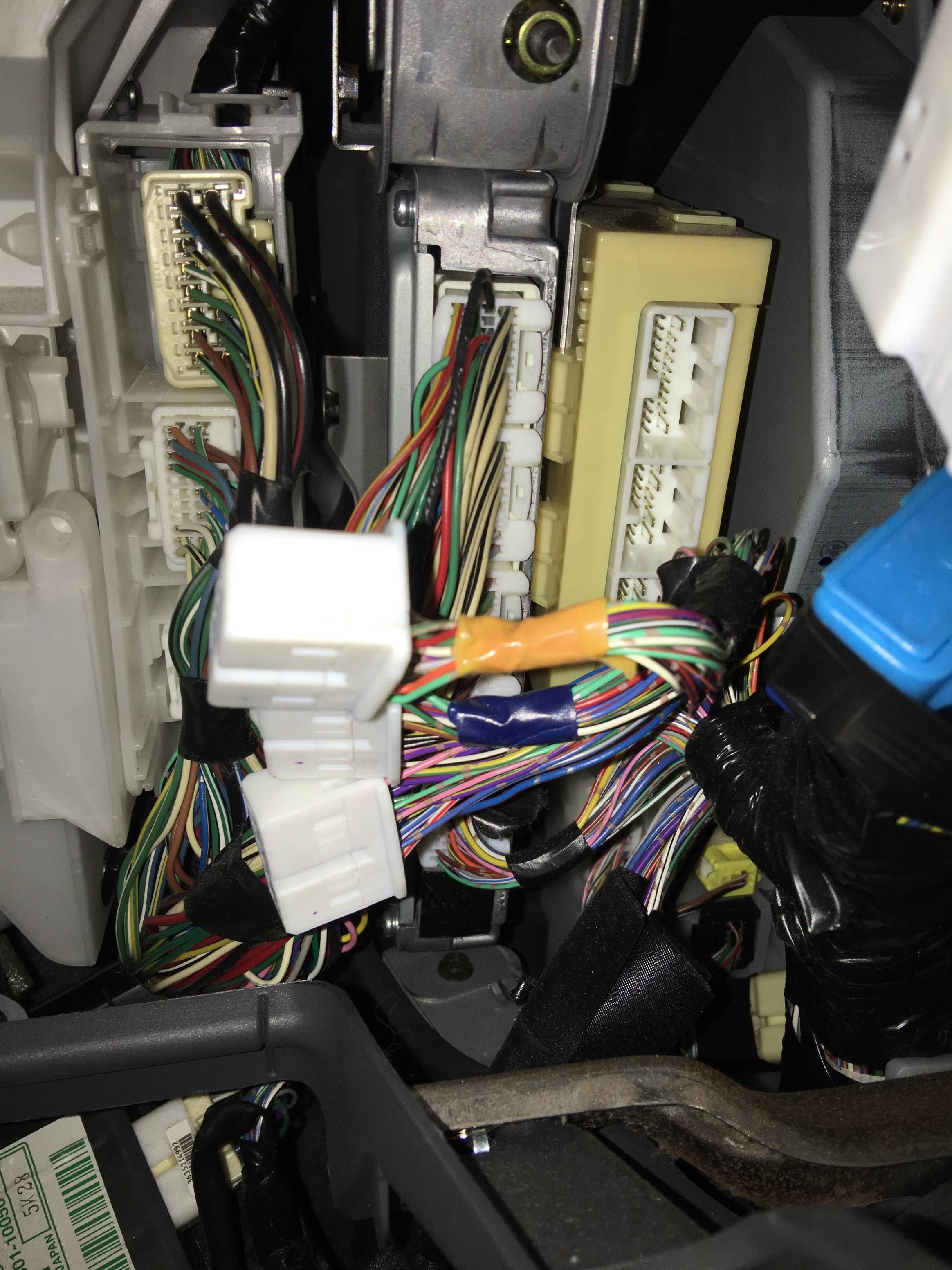 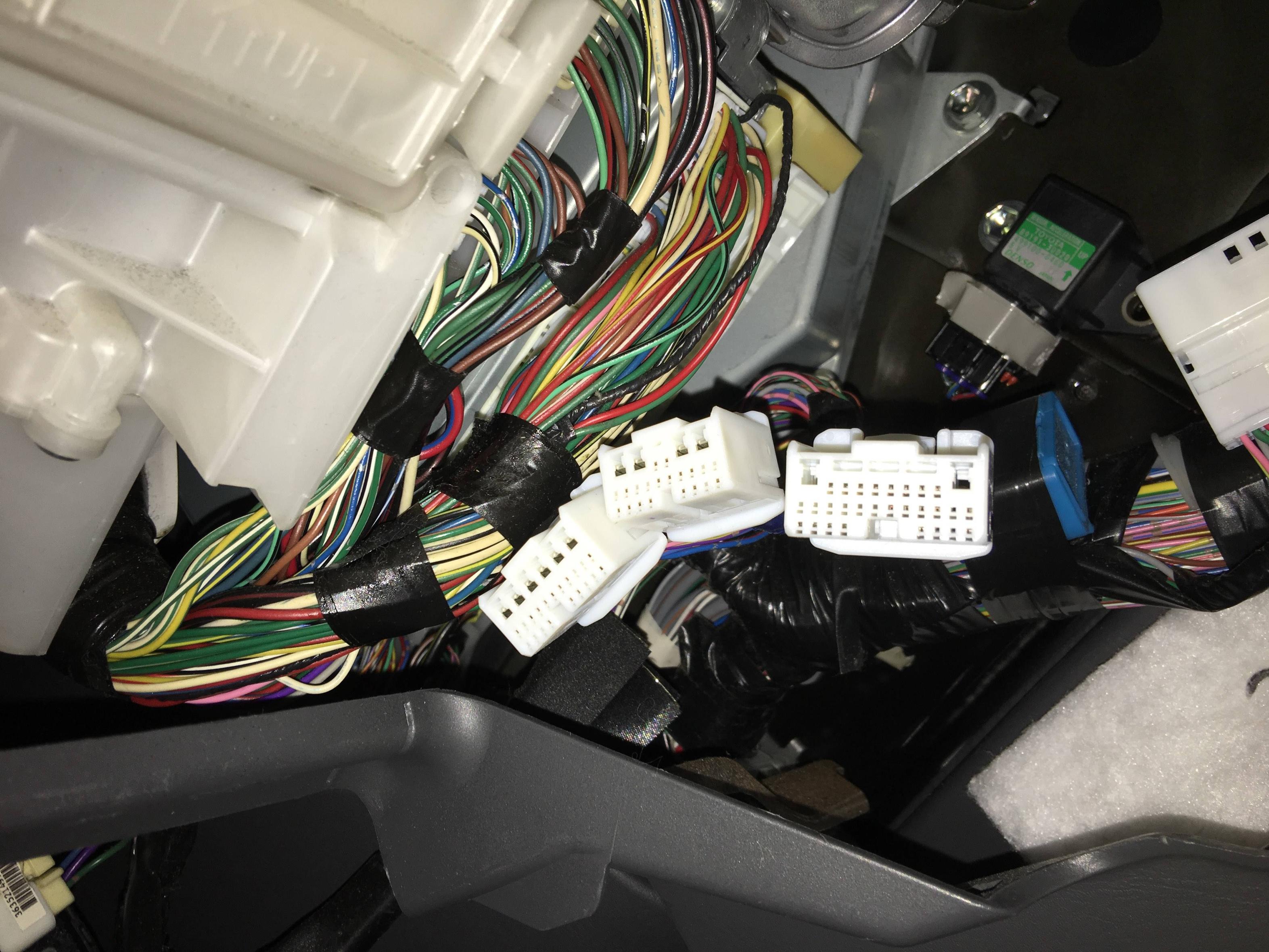 This is a first draft. I'll work flesh out details and add pictures. All audio wiring is out of scope, but easy, if slightly weird, if you've installed an aftermarket head unit or two in the past.

According to this link if you can find a non-nav unit from the same year (though 03-09 seem to be interchangeable), you should be able to swap the hvac (heating, ventilation, AC) controls directly into your dash and have full control of the air flow.

I've found a couple examples on eBay that should fit (example 2). If you're not comfortable doing this work yourself, I would consult an aftermarket stereo installer (eg cartoys) and ask them if they'd be willing to help you out. The dealer may or may not be comfortable doing this kind of work, but if they do they won't be cheap. Either way, a stereo installer may also be able to source any additional bezels or trim pieces that you may need to 'complete' the dash. If you could provide a picture of your dash we might be able to tell if you'll need anything else (but no promises).

If you do plan to tackle this job yourself, be extremely patient, as it's pretty easy to break little plastic clips in the interior. Watch youtube videos and write up exactly where and how many screws, bolts, and clips you need to remove before you get started. If you have a local auto scrap yard, check to see if they happen to have your car in their yard, and go in and practice taking apart the dash on a car that you don't have to worry about breaking. If you're lucky, they'll even have the hvac control panel you need so you can practice taking out the exact piece you need to reinstall. You can also bargain with the scrap yard to get a better price if you bring cash.

Not the answer you're looking for? Browse other questions tagged audio lexus climate-control navigation or ask your own question.