Do I have a fuel pressure or injector problem, or am I just chasing ghosts?

I just did a fuel volume test on my 98 Mazda 626 2L GF. According Tim Giles book Automotive Service:

Each injector is energized for 15 seconds... Variations of more than 5 ml calls for replacement of the injector.

In the 626 workshop manual, it simply says to energize the injector without specifying a time, and that the volume should be between 56-61 ml.

So I did the test by manually energizing the fuel pump, and grounding the injector ground pin while using some hose to route the fuel into a bottle: 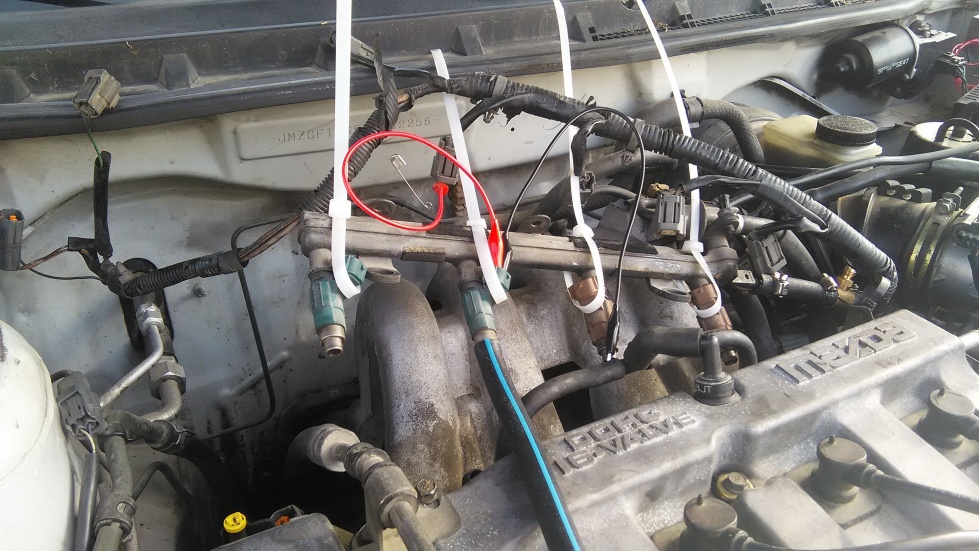 I held each injector open about 15 seconds and I got the following results ( ml ):

I'm pretty sure I was fairly consistent in my timing ( counting verbally 1-1 thousand, 2-1 thousand, etc... till 15-1 thousand ). Afterwards, I timed how long it takes me to say that and it was about 17 seconds. That's about 13% overtime potentially, which translates to about 7-8ml. But what seems more important is that only the #2 injector gave me a consistent reading.

The resistance on all the injectors is good at 15.5 ohms iirc and fuel pressure was fine at 35psi idle and 44psi with the fuel pressure regulator disconnected when I checked a few months ago. Also, fuel pressure dropped to 21psi after about 5 minutes. I do seem to have rough starts, but only intermittently, which is a bit confusing. Unfortunately, my fuel pressure gauge is broken at the moment, or I'd redo those tests.

Since I don't have a working fp gauge I did some other tests:

Now according to Tim Giles book Automotive Service, typical fuel pumps draw 1 amp for every ten PSI of pressure. Based on that I might expect to see about 3.5 amps being drawn during idle and about six to nine amps when manually activating the pump, since the WSM indicates expected readings of between 64 to 92 psi in that situation. The WSM also says that after the manual activation test the line should hold at least 50psi five minutes after turning off the pump. That makes it seem weird to me that pressure dropped from 36psi to 21 in my test a few months ago.

The reason I'm doing all these test is because I'm experiencing intermittent rough starts, and intermittent rough idle plus rough idle under load of varying intensity and I've eliminated just about every other cause I can think of. What I mean by "rough idle under load" is when I add a load at idle like the AC, electrical loads: turning on the fan + defroster + radio + headlights, or hold the break down with the car in gear, the idle gets rough. The roughness is inconsistent and is sometimes worse and sometimes better for the same action.

Based on my various results, I'm suspecting my injectors my be a bit sticky and need cleaning, and that there might be an intermittent problem with the check valve on either the pump or return line which is letting pressure bleed off too much sometimes.

Does there seem to be a fuel system problem here, or am I just chasing ghosts?

So I redid the tests with a stopwatch ( 15 seconds ) and got these numbers:

Using the stopwatch made a big difference. Not any huge inconsistencies between the injectors, although #3 might be a bit borderline.

The car sat for 36 hours before I redid these tests, so I decided to check for any leaks before I did anything else. The #2 and #3 injectors were completely dry, but the #4 injector was noticeably wet, while the #1 was also a little wet: 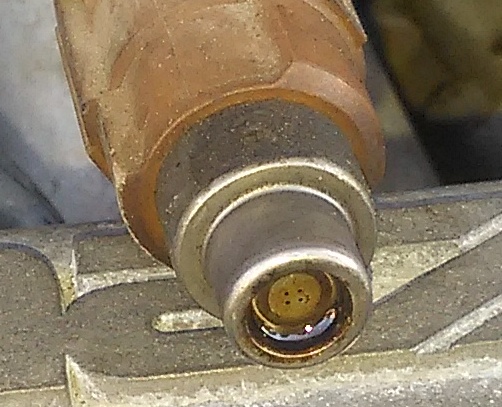 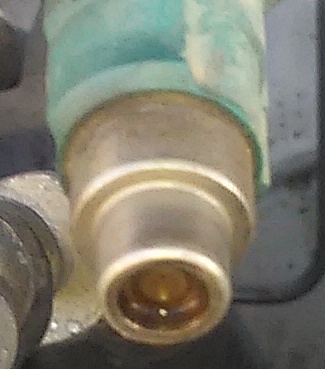 So I'm guessing I've got a bit of a leak from these two injectors, and as it happens these correspond to the spark plugs which had carbon fouling. I'm guessing this might be part of the reason I'm having rough starts after the car sits for a while. When I started the car after doing these tests it started up smoothly, which I'm assuming is due to the fact that fuel lines where properly pressurized as a result of these tests?

I also took some video of the spray patterns for each injector and here are some screen shots: 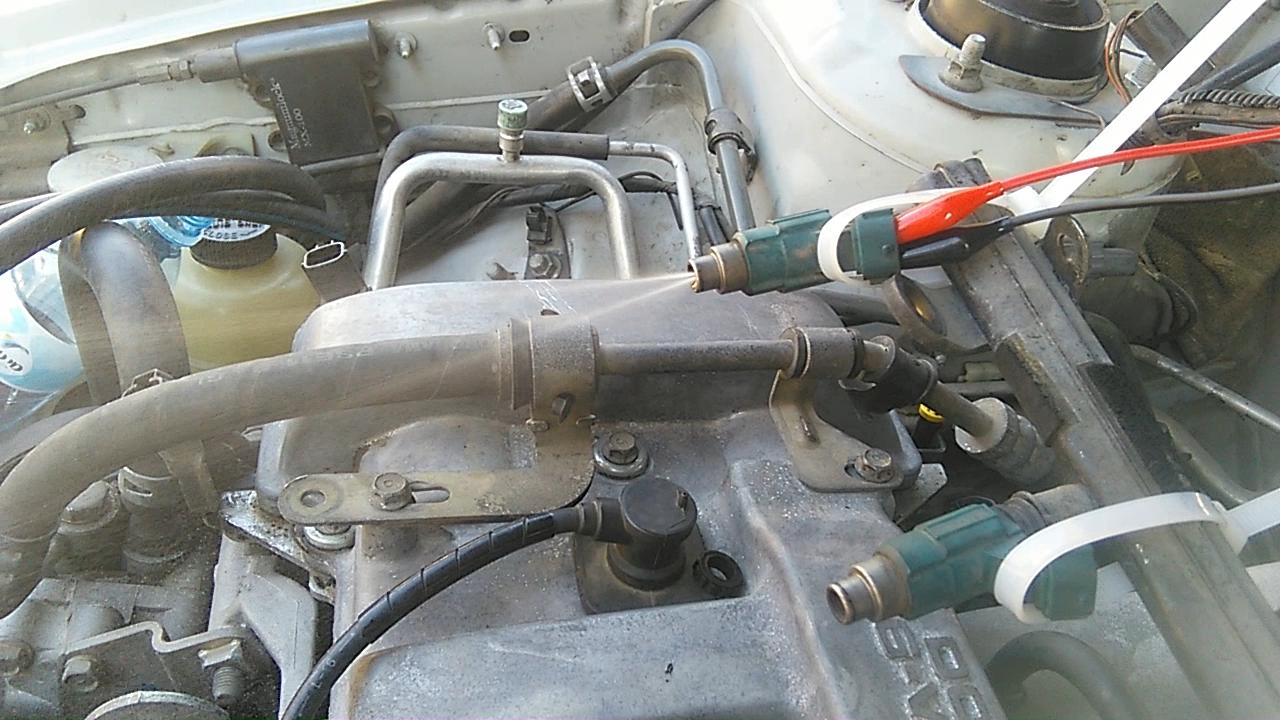 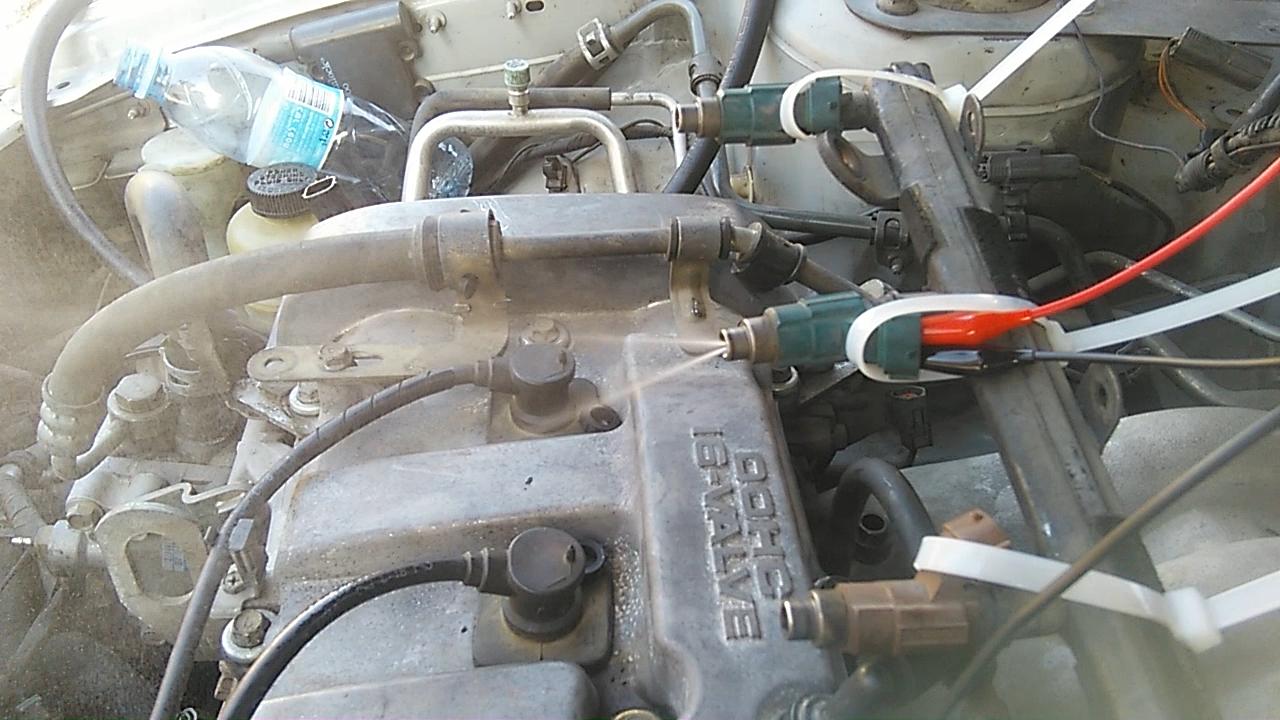 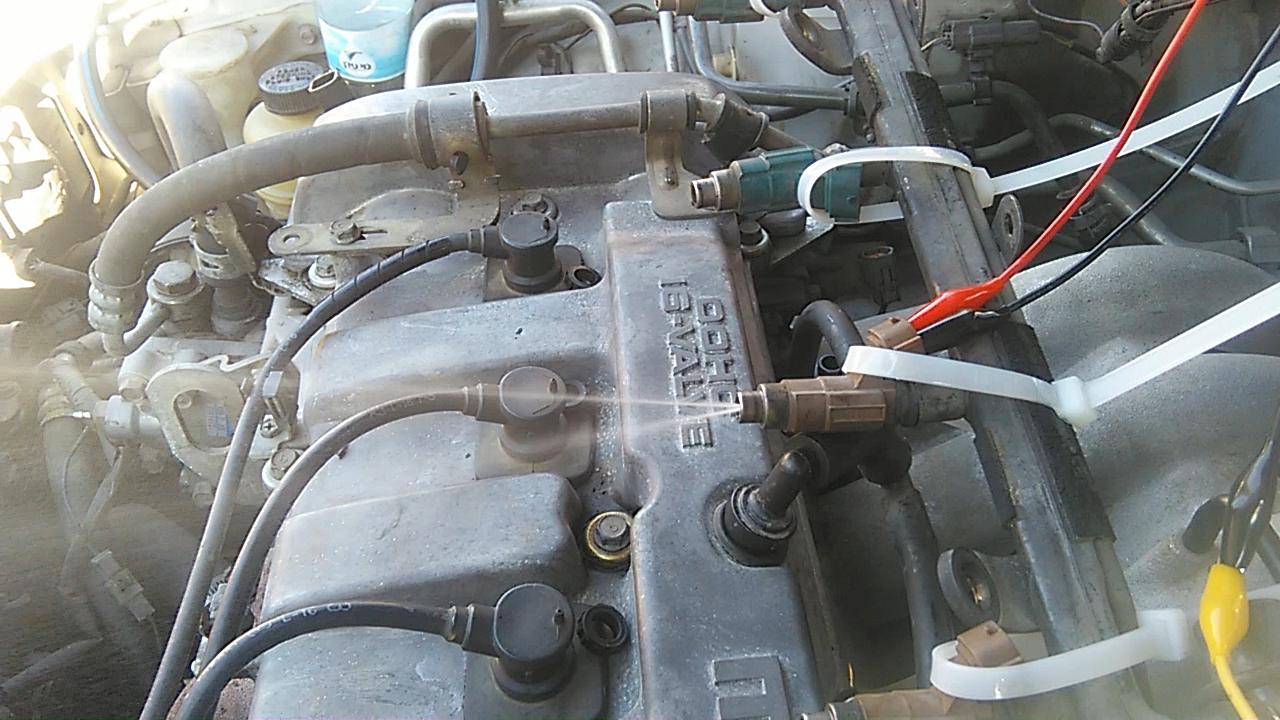 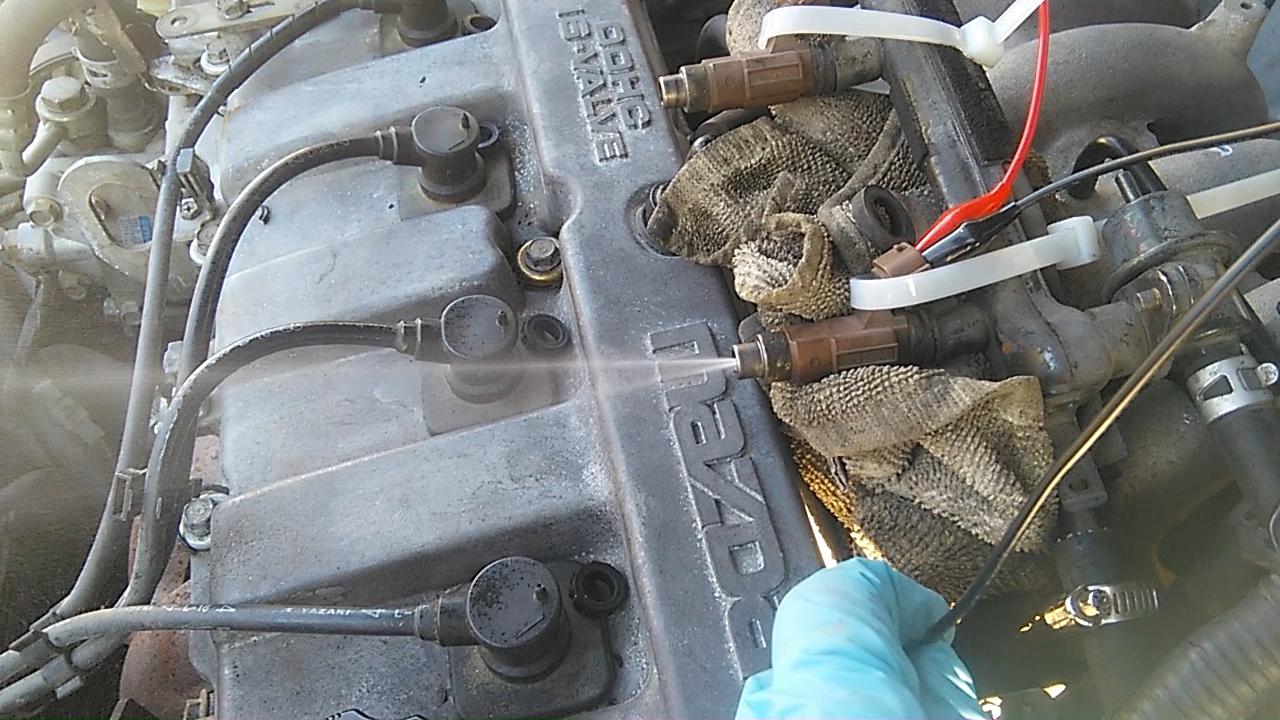 The most I can say about the spray patterns is that they don't look identical to each other, which I would expect them to be. Now some that may be due to viewing angle, but it seems to me there is more variation in them than that can account for.

So, I posit my question again, do people see a problem here, or am I just chasing ghosts? I was thinking of running a few liters of homebrew seafoam through the tank at a 50% sf to gas ratio ( Seafoam's recommendation for cleaning injectors ) to see if that might help.

Realistically I'd redo your test using a little more accurate of a timing sequence. Two things to really make it more accurate:

Until your tests are repeatable, they are really only guesses.

BTW - Great update with the pics and information.

I would try and clean the injectors first. They are putting out the same amount of fuel for the most part. Your deviance of 60-62 ml per 15 seconds really isn't much. Even your "Try 3" shows you were pretty much right in the ball park with only 1ml of difference across the board.

If you can get a standalone fuel pump to pump your homebrewed SeaFoam through your injectors, this is where I'd start. This should clean up any deposits within the injectors. If you do this, ensure you are cleaning them both ways by pressurizing from the nozzle side as well as the rail side. By doing this, you are ensuring any thing which may be caught one way or the other is getting released. Running SeaFoam through these should help with the spray pattern as well as with stiction if there is any going on.

After you get them cleaned properly, recheck your spray patterns and see if they aren't noticeably better. Then also, do your leak down again to see if #1 & #4 are still showing wet. If they are still showing wet, I'd consider getting new (or refurbished) injectors. If cleaning doesn't allow them to stop leaking, the problem lies in the plunger, not in it seating fully. Getting a matched set may not be a bad thing. The leaking could most likely be the issue with your rough idle. If the two injectors are releasing or allowing to release more fuel than they are supposed to while running due to the plunger not closing quick enough, it would be releasing extra fuel every time it cycles, causing a rich condition in the two cylinders, which would be more than enough to cause the rough idle. It may not show up in a flow test because it is just one cycle you are accounting for. This is a long shot (more of a spitball), but at least one place you want to start with to validate or invalidate your thinking.

I was slightly worried there might be an issue because it appears you are using two different types of injectors, as noted because of the different body colors. Usually different colored injectors, especially with Ford and Ford related injectors (Mazda and Ford are completely in bed together, btw), usually is meant as a means to tell injector flow rates. This was tempered quite completely by your flow results.

Even with the leakage from the #1 & #4 injectors, it doesn't appear there is that much leakage. I don't think it would fully account for the amount of pressure drop you are seeing over the given time period. This would lead me back to the flow back mechanism in the fuel pump. I'm not sure if this would be causing your rough idle, though. Hard starting, maybe, but not the rough idle. I believe once you get the #1 & #4 injectors squared away, your idle problems may be fixed.

Not the answer you're looking for? Browse other questions tagged fuel-system fuel-injectors fuel-pump mazda-626 fuel-pressure or ask your own question.

8
What Could Cause Flash Over / Arcing to Reappear on New Plugs?
7
What are some Seafoam Alternatives
4
What does a good injector spray pattern look like for a four hole injector?
6
Do I have a fuel pressure or injector problem Part 2
2
How Long to Power the Injectors for a Fuel Pump Volume Test?