I asked a question about troubleshooting ECU related short circuits.

No more short circuits in the wiring harness, the only short left appears to be inside the ECU.

This leaves me with a faulty ECU. The diagram below explains how the entire circuit works, what it looks like. The problem appears to be between IMRC Terminal 1 and PCM Pin 42, which is now permanently closed irrespective of engine RPM when it should be in a different state if RPMs are less than 3,300 and in another state if RPMs are higher than 3,300. 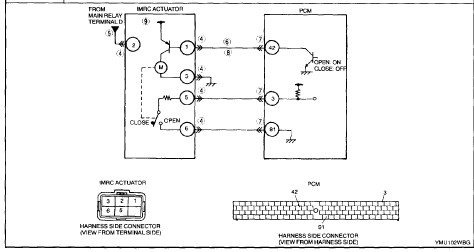 What is the best way to go about fixing this?

Get a new ECU?

Repair this ECU? Is ECU repair something that can be done by a DIY? or best left to the experts?

Or get a junkyard ECU?

By the way I followed all the manufacturer guidelines for fixing this except one step. I have two error codes P1520 -IMRC Drive Circuit Malfunction and P1512-IMRC Shutter Valve Stuck Closed, and it says if one has followed all the steps and the problem is still there, replace the IMRC Actuator and if that still fails, then the PCM.

If there is continuity, the circuit is short. Repair or replace the harness.

I had four of those shorts involving IMRC actuator terminals 2 5 and 6, and now I have no more short circuit but the IMRC does not work despite eliminating all the short circuits.

The short circuits that were fixed were as a result of chaffed wiring of the left rear oxygen sensor which is part of the performance circuit of the vehicle.

Actually, after going through some of the comments on the earlier referenced question, I decided to carefully inspect my oxygen sensors, one of the them was the cause of all the shorts in the circuit, since I had overlooked them all along.

Had I followed the instruction to simply replace the wiring harness, I would never have thought of the oxygen sensor itself, but just the wiring between the ECU and those devices and would have skipped this insulation damage.

Here is the ECU I am talking about: 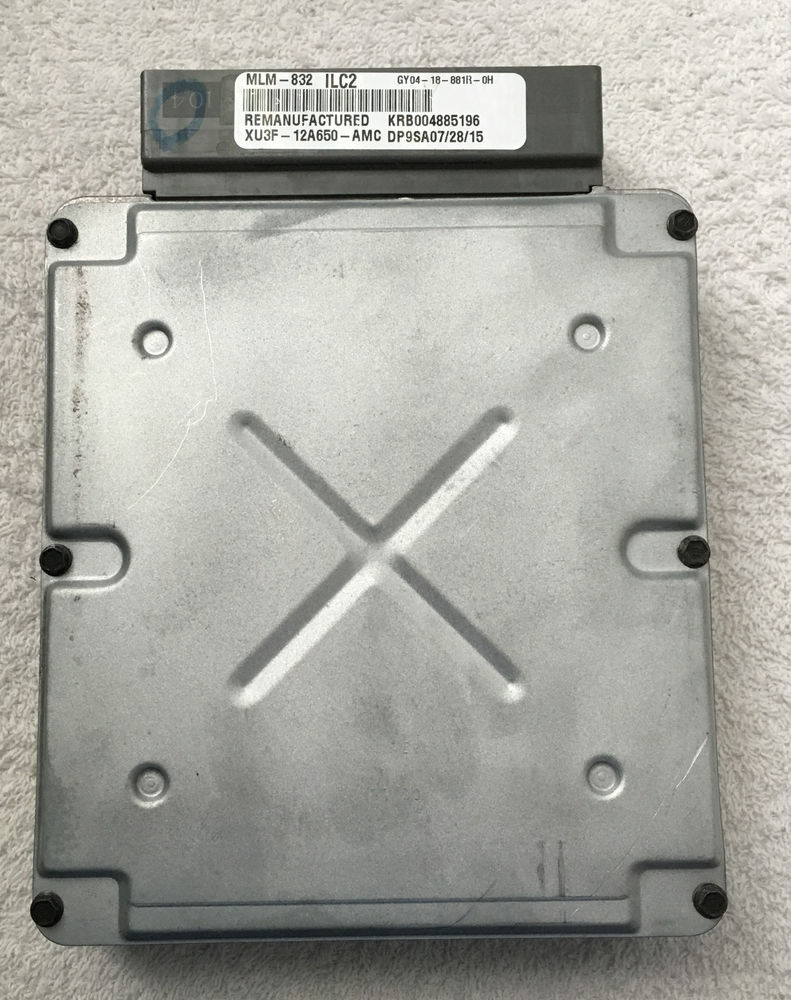 Even with the wiring harness fixed, the voltage drop at:

does not match manufacturer specifications

The voltage drop readings should be as follows ( manufacturer specifications)

But in my vehicle it reads

HOW THE IMRC WORKS

The IMRCs are programmed to be closed below 3250 RPM and they open above 3250 RPM.

The IMRC Controller has Hot-In-Run power, a ground wire, a control input, an IMRC monitor signal and a signal return wire to provide the reference ground for that monitor signal.

There is a monitor signal that goes from the IMRC controller to the PCM. The PCM has an internal resistor that tries to pull that input up to 5 volts all the time.

Inside of the IMRC controller controller are two parallel resistors that pull that signal's voltage down to below 1.6 volts when two resistors attached to that signal are connected to ground by two switches close when each bank of IMRCs actually open.

If the IMRC monitor voltage is above 1.6 Volts when the PCM has commanded the IMRCs to open, the PCM assumes one or both of the IMRCs has stuck closed.

If the IMRC monitor voltage is below 3 volts when the PCM has commanded the IMRCs to close, the PCM assumes that one or both of the IMRCs has stuck open.

If the PCM assumes the IMRCs are stuck either way, it sets the appropriate DTC and sets a CEL.

The purpose of the closed IMRC valve is to increase the air charge velocity at low RPMs which fills the cylinders more, giving you more low end torque. They open at higher RPMs in order to allow full air flow through both ports. 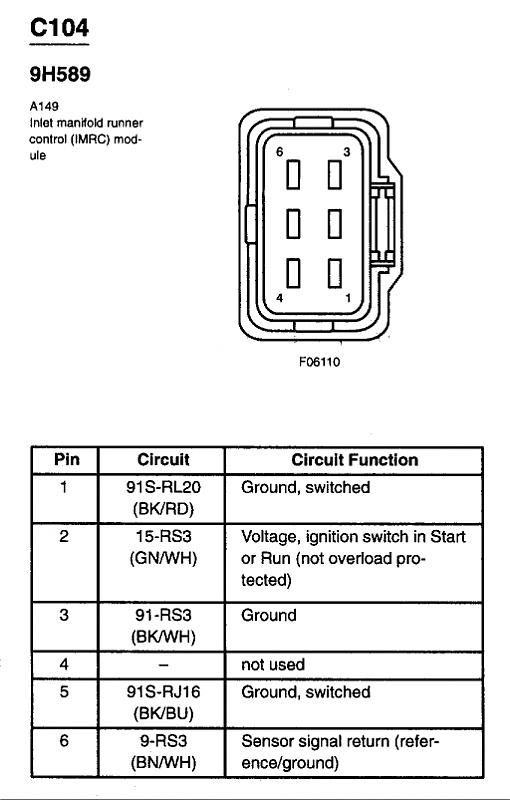 RESPONSE TO ANSWER BY @VINI_I

You said: The voltage on the line between pin 1 and pin 42 is provided by the IMRC.

You also said: The sensor on the other hand, inside the IMRC there are no connections to power. The sensor is just a dumb switch. The power connection is inside the PCM and the IMRC pulls the signal low.

Does that not sound contradictory? Can the voltage be provided by the IMRC if the power to the IMRC comes from the PCM?

What is the purpose of IMRC Terminal 2's connection to Main Relay Terminal D?

Next pull pin 42 out of the PCM. Run the engine and check what the voltage is on the pulled out pin. It should be B+.

This was further clarified as follows: When i said pull the pin out i meant physically remove the pin from inside the PCM connector. This will check all the wiring from the PCM to the IMRC.

Should it be pulled out as shown in the picture? 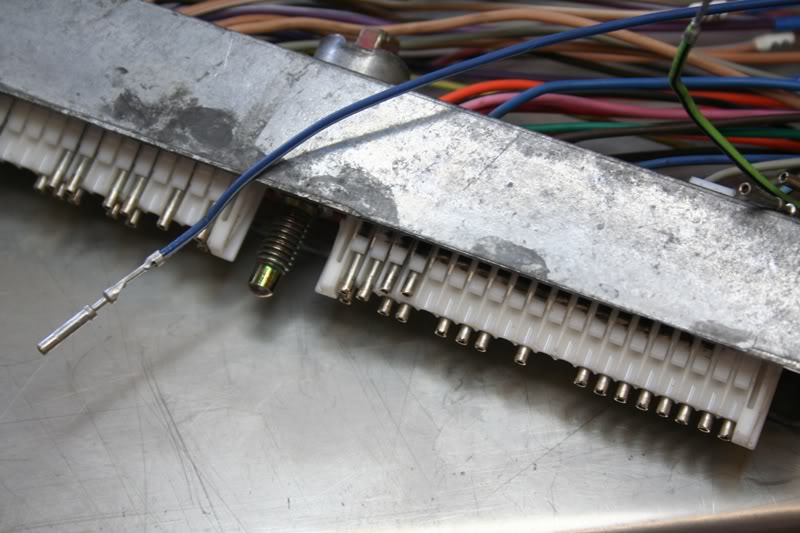 Another test you could run. Disconnect the IMRC (Actuator). Attach a 10kohm 1/2W resistor from B+ to pin 1 of the IMRC (Actuator or Harness connector?). Measure at the connection between the resistor and IMRC (Harness ) connector with a meter. Run the engine at the particular speeds to engage the IMRC. If you see the voltage drop below 1v as described by the diagnostic procedure then the PCM is fine.

Does it matter where I take the B+ from? Can I take it from IMRC Terminal 2 of the IMRC harness? or from the +ve battery terminal? Is the resistor connected to the harness connector and not the actuator?

Based on your answer below, the IMRC is dumb, it is the PCM that supplies it power and ground. If then I have a problem with PCM Pin 42, it then means that even if the PCM is perfect, the PCM terminals may be bad - that is damaged, pulled-out or corroded! Which brings me to the realization that while I have done all the other tests, I did not attempt to inspect the PCM Connector as advised in step 7 in the attached diagram.

It is much more likely that the IMRC is damaged.

The voltage on the line between pin 1 and pin 42 is provided by the IMRC. The PCM then pulls that voltage to ground to turn the IMRC on. When the IMRC is on the voltage on pin 5 drops to below 1v.

In your case the the voltage between pin 1 and pin 42 is always below 1v. This could mean one of two things.

Issue 2. Yes pull the pin out as pictured.

Issue 3. The B+ could be used from anywhere. Getting it from pin 2 of the IMRC harness would probably be the most convenient. Yes the resistor is connected to the harness and not the IMRC.

Issue 4. Yes the IMRC is dumb but the PCM only provides a control signal. See issue 1 answer. What the diagnostic procedure i gave you provide is a way to figure out whether the IMRC control transistor is bad or the PCM control transistor is bad. It could be one, the other or both. It could also be the wiring between the PCM and IMRC. Check the continuity of the wires while the PCM is disconnected. To repair these the best bet is to go to a junk yard and cut the connector out of another MPV. Then pull the pins out as pictured and replace them in your connector.

I'd advise against repairing ECU's, and splurging on a brand-spanking new one is, in my opinion, excessive. Get one from the junkyard, make sure the vehicle you are pulling it from has the exact same options, exact same engine, exact same transmission.

Not the answer you're looking for? Browse other questions tagged electrical troubleshooting ecu dtc pcm or ask your own question.