What is the significance of rotating tyres in this pattern? 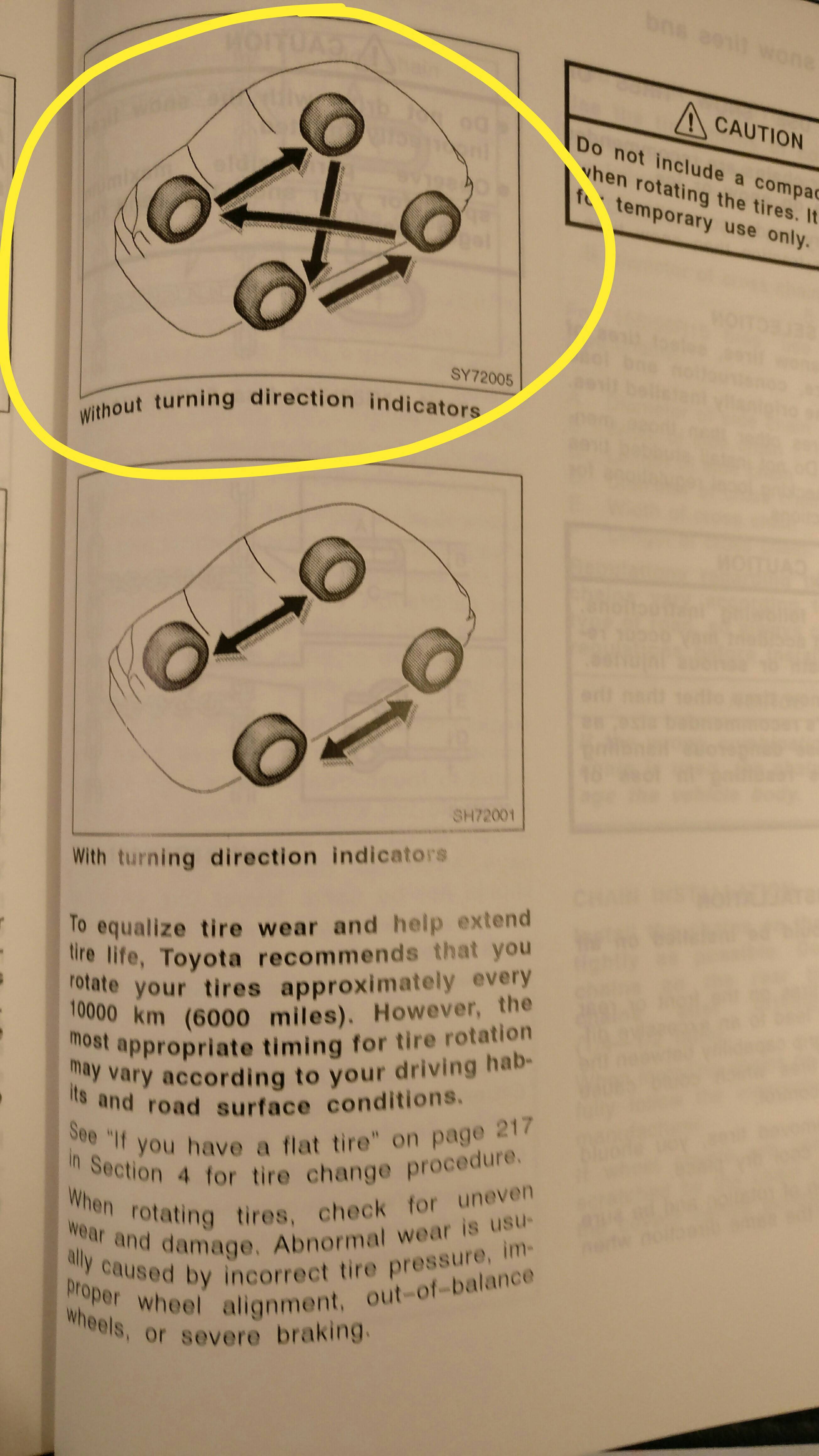 For non-directional tyres, what is the significance of swapping tyres in this pattern? Specifically, why is it advised to keep the front tyres on the same side of the car when moving them to the rear?

Why rotate tires at all?

You probably already know this, but the reason we rotate the tires is to even out the wear and to try to maximize the miles from each set. For that reason, if the vehicle has a full-size spare tire that is also the same size and is also non-directional, it would be included in the rotation. If the vehicle had dual rear wheels (as with some trucks), those would also be included.

For front-wheel drive vehicles (which I am guessing this one is), the front tires wear more than the rear tires. To maximize the use of the tires, we want to try to assure that each tire alternates between high wear and low wear positions. Obviously, the spare tire is the lowest wear, since it's not even touching the ground.

Cross or not cross?

Because the major wear difference is between front an rear, one way to rotate the tires is to simply swap front to rear (ignoring the possibility of a full-size spare). However, there are often noticeable differences in the wear rates of the front right and front left tires (especially for front-wheel drive cars), so if the tires were only swapped front-to-back, one side might wear sooner than the other. The solution is to make sure tires get rotated front to back and side to side as in the left and middle diagrams below.

Note that we probably don't want to cross the tires in both directions (front-to-back and back-to-front, as shown in the right diagram) because then any given tire would only occupy 2 of the possible 4 positions on the vehicle and if there were, for example, a wear differential front left and front right (as there is for many front wheel drive cars), one pair of tires would wear more than the other.

Given only four tires (ignoring the spare again), then it makes sense, given the above, to swap from front to back and from side to side, but two ways this could be done, would be to move the front tires straight back and then cross the rears on their way front (as is shown in your diagram) or to move the rears straight forward and swap the fronts on their way back. Which is better?

The answer to the rhetorical question above is that it really doesn't matter, as long as the pattern is applied consistently. If you chose a pattern each time, you might not remember the last way you'd rotated them, but if you and all previous and all future owners follow the pattern in the manual, the consistent use of the same pattern will maximize tire mileage over the life of the vehicle.

The idea behind that pattern is that it tends to distribute the wear more evenly over the surface of the tire if there are minor alignment errors. I don't think there is any reason to keep the front tire on the same side of the car, except that it might result in a bit less movement of the tires from one side to the other.

It is about tire wear but I have not seen the issue that causes the undesirable wear addressed in the previous answers. The uneven wear that is being addressed with cross rotation is caused by normal 'Braking'.

Low air pressure, incorrect toe or camber will cause various tire wear problems that will not be corrected by rotation. Proper air pressure, alignment specifications and vehicle loading is the only thing that will effect these types of wear. So a straight to back rotation will be as helpful as a cross pattern.

Think about what happens when you apply your brakes. The mass of the vehicle is moving forward and the tire is rotating forward. When you apply the brakes think of the 'wheel' going backwards!!! Obviously this is exaggerated but will help you visualize what is happening. (this is where a picture would be worth a 1000 words.) If you were able to see this you would see the sidewall of the tire twist in a clockwise direction as the tread is still moving in a counterclockwise direction. This twisting motion pulls the front of the individual lugs on the tire, maybe 1/3, out of contact with the road, getting no wear. The remaining 2/3' of the lug is still in contact with the road and will wear. This is the jagged edge you feel running your hand around the tire.

So why cross rotate. Moving the tire to the opposite side of the vehicle reverses the direction of rotation of the. So now those little high spots on each individual lug on the tire will be worn down because they will now be in contact with the road surface during braking. This is also the reason you cannot cross rotate a directional tire.

This problem is more prevalent on front wheel drive vehicles due to the high percentage of front brake bias. Tire design also plays a roll. Think of a passenger car tire with small tightly spaced lugs as compared to a mud and snow tread with large widely spaced lugs. If the wear is severe you may want to cross rotate the fronts only, to accelerate the wear that will bring them back smooth and then do a front to rear rotate.

Gentle braking and proper air pressure will help to minimize this type of wear.

The reason to keep the tires on one side is

I do agree that cross rotation make tire wear more even for non-directional tires.

The pattern has been carefully selected to obtain these three features:

I don't think any existing answer underlines the point (3).

Point (3) is important, because sometimes a tire gets damaged and identical replacement cannot be found. Then the two tires on the same axle will both be replaced. It is possible to run mixed tires, as long as they are not in the same axle.

For directional tires, the pattern is to just swap front and rear, without ever swapping left and right.

Not the answer you're looking for? Browse other questions tagged tires maintenance or ask your own question.

8
Motorcycle chewing through too many front tyres
8
Should one fit the least-worn tires to the rear wheels?
4
Does more frequent tyre rotation make tyres last any longer?
3
Can I change a single worn tyre instead of a pair?
3
Can I use “Designed for BMW” Michelin tyres with a non BMW?
2
Mixing crossply and radial tyres but not on the same axle
6
Is there a reason for even trying to make tires last
86
Why don't we rotate tyres but you rotate tires?
5
Is it acceptable to move tires between sides of a car? (left to right / right to left)
2
How are the inside front tyres wearing down so quickly- Ford KA