Does my mother's car have a thermostat problem?

Today, I was driving my mum's car, a Citroen C3 1.4 HDi from 2004, and I noticed that the coolant temperature was rising very slowly. Just as a reference, this is what the dashboard looked like (picture from different car, but for my purposes here this is not an issue; coolant temperature reading was exactly the same as in the picture below): 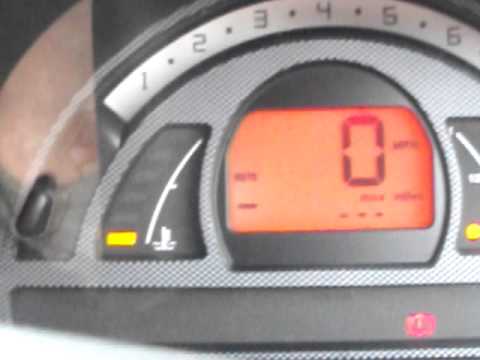 It actually never went up after one block, even after driving a significant distance. If this coolant temperature indicator is designed like all the others I've ever seen, you'd expect the indicator to be in the middle (i.e. three blocks out of six, approximately).

This would lead me to think that the car did not reach proper operating temperature and that the thermostat is most likely malfunctioning and stuck in the open position. However, she said that she mentioned this exact observation to a mechanic and that it's "not an issue" and that it's "normal for the indicator to not rise after one block", so she doesn't believe me. This, however, makes no sense to me at all. If all of this were true, there would be no way to know anything about the coolant temperature until it is at operating temperature, yet there are five blocks left to indicate overheating (out of which only two are red). This just doesn't make any sense to me.

I wanted to use an OBD2 scanner to get the temperature reading, but this car has a non-standard connector so I couldn't do that (I can of course buy the right part but that might be a bit overkill for something like that). Maybe I could use probes to measure the temperature, but I don't really like working near potentially hot coolant.

So, actually, the core question is very specific: is one bar out of six indicating operating temperature in this car? Again, I highly suspect that this is not the case, but since a mechanic told her otherwise, I'd like to get confirmation.

I don't have a C3 Picasso, but can see plenty of Google images which show the temperature indicator is at 3 bars out of 6. I'm pretty sure that you're right – the gauge needs to be able to show both low temperatures as well as normal and hot.

That said, it makes sense to see if you can figure out what's wrong. If you had an OBD scanner that you could attach that would be the easy to way to sort this out, but since you don't one way to approach it is by checking the heater output. If you're getting plenty of hot air the problem is probably not with the thermostat but with the temperature sensor. It may have failed and be reading low.

That may be "not a problem," as the mechanic said, in the sense that the car still seems to be functioning normally, but it is most definitely a problem in the sense that your mother won't be getting any warning of a problem if one does develop. Also, the ECU may be using the same sensor to determine operating parameters for the engine. You're right to want to pursue it.