I have a 2013 Audi Q3 (right hand drive) and have been getting wet carpet in the passenger footwell. Audi have already taken a quick look at the car while it was in for a service. They claimed to have checked the plenum chamber and the sunroof and said it'd need to be booked in for a water test for them to investigate further. As this will likely cost a lot of money, I thought I'd take a look myself.

Have removed some of the interior trim, opened the sunroof and poured some water into the sunroof drain holes to see where it comes out to. This video shows that most of the water comes out from the outlet near the door. There are other drips that come into the interior of the car. It's not much, but I guess this should not be happening!?!?

Am I on to something, or is this test unrepresentative because I'm pouring more water in the sunroof drain holes than would happen normally (especially as the sunroof is usually closed)? What next? Removing the trim on the A-pillar? What will I see under there and how best to remove? 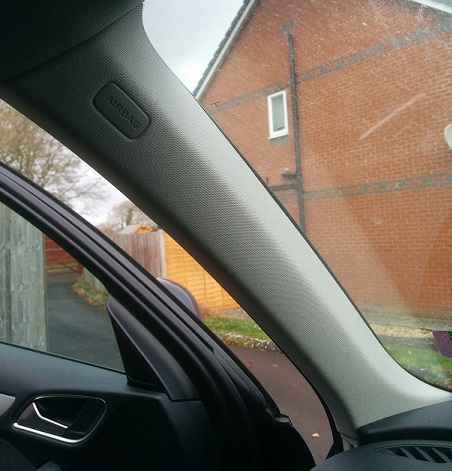 I believe if one (or more) of the roof drains were blocked, you'd be seeing wetness around the ceiling and pillars of the vehicle. Typically, a plugged drain in the cowell box will cause you to have water drain into the passenger foot well area. This is the area at the back of the engine bay, underneath the hood. You have to pull up the two sections of covering, which are usually secured by plastic clips. Under them you'll find the cabin air filter and if the drain is plugged, a lot of water. Clear the drain of debris so it will run out as it's supposed to and you should be golden.

I see what you're talking about with the water coming down the A-pillar. The place where the leakage is most likely to occur is where the sunroof drain connects to the drain tubing. You'll have to dismantle the sunroof to get to where I'm talking about. You may be able to get at it by removing the hoodliner inside the car. I would take the A-pillar bits/pieces apart as a last resort, due to their being an air bag present there. If that blows up in your face, you're going to be in a world of hurt. If you take the sunroof out, more than likely you'll find the tubing has partially disconnected from the drain. Ensure it is fully seated, there's no cracks in the tubing itself, then reattach the tubing using some rubber cement to ensure it seals up nicely.

Not the answer you're looking for? Browse other questions tagged audi water-leak sunroof or ask your own question.