Installing a battery in a carbureted motorcycle with ABS

I've got a 2005 Honda CBF600SA carbureted four-stroke motorcycle with four cylinders and ABS. I need to re-connect the battery but don't remember exactly how the cables were configured; which cables go where, and in which "order" do I attach them (i.e. which go on top of the others)? 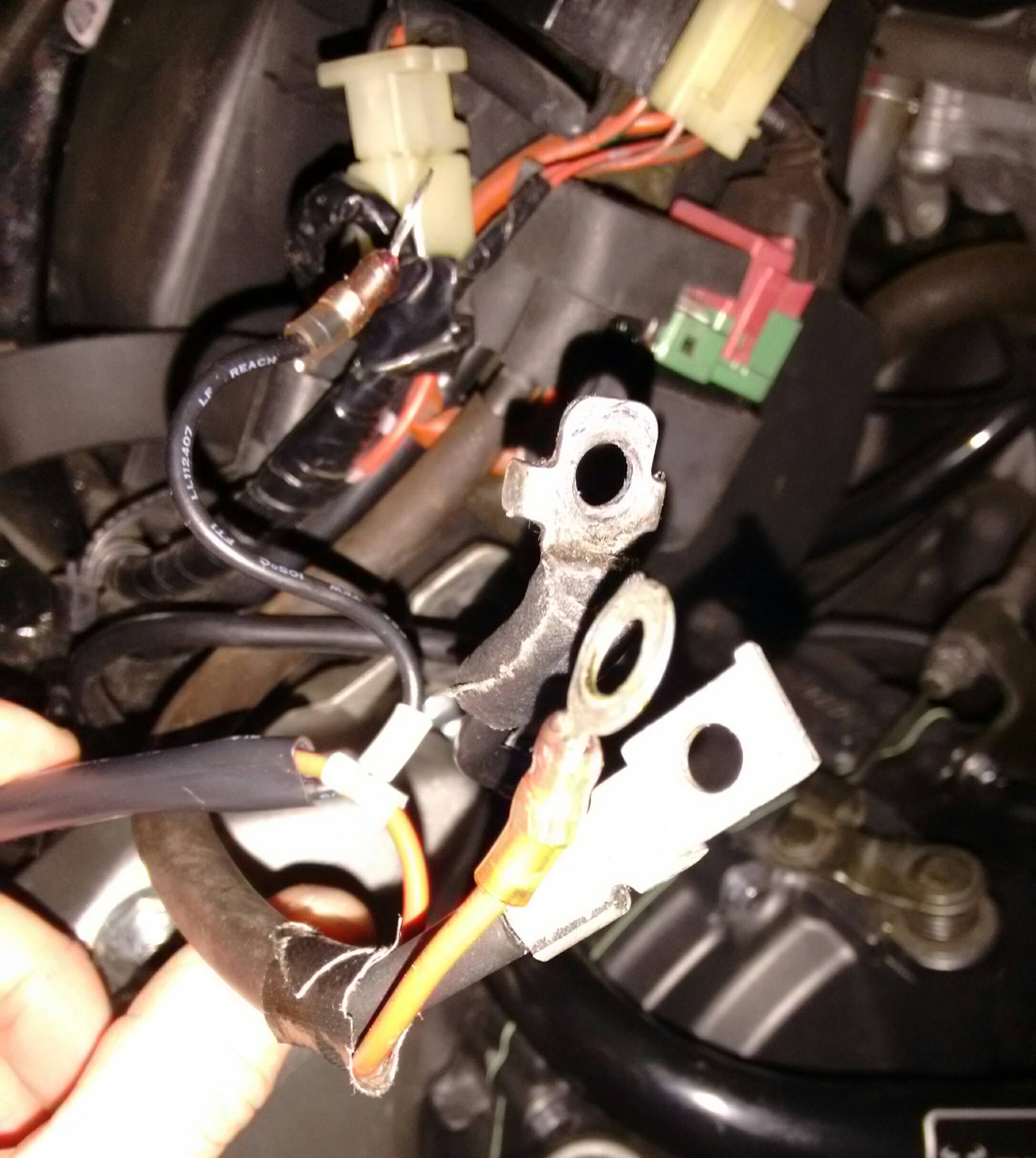 I have not been able to find a parts diagram for your model (likely because of the region I live in), so I will explain how to tell which cable is which.

If you trace it back, one will attach to the chassis for a ground. That is the negative battery cable (I would check the one with the two small flanges first).

The thicker one, with the "L" shaped connector, is likely the positive battery cable (I say this because of the red wire taped to it that looks like it was connected with the same bolt). This one should lead to a relay pack before the starter.

Because they don't always have color coded cables these days, this is a good example of why labeling connectors and cables is important.

Check out this manual. I don't think your battery is lithium; it's most likely a sealed lead acid battery (SLA, sometimes referred to as AGM, or absorbent glass mat). They tend to be a lot smaller than regular car batteries in terms of dimensions (I have some that are about 3"x4"x5") but are much heavier than lithium batteries would be.

Below is the relevant picture:

SAFETY NOTE: be sure to read the manual regarding the battery strap, as it is apparently used to hold some cables and hoses in place as well, otherwise they may get damaged by moving parts! 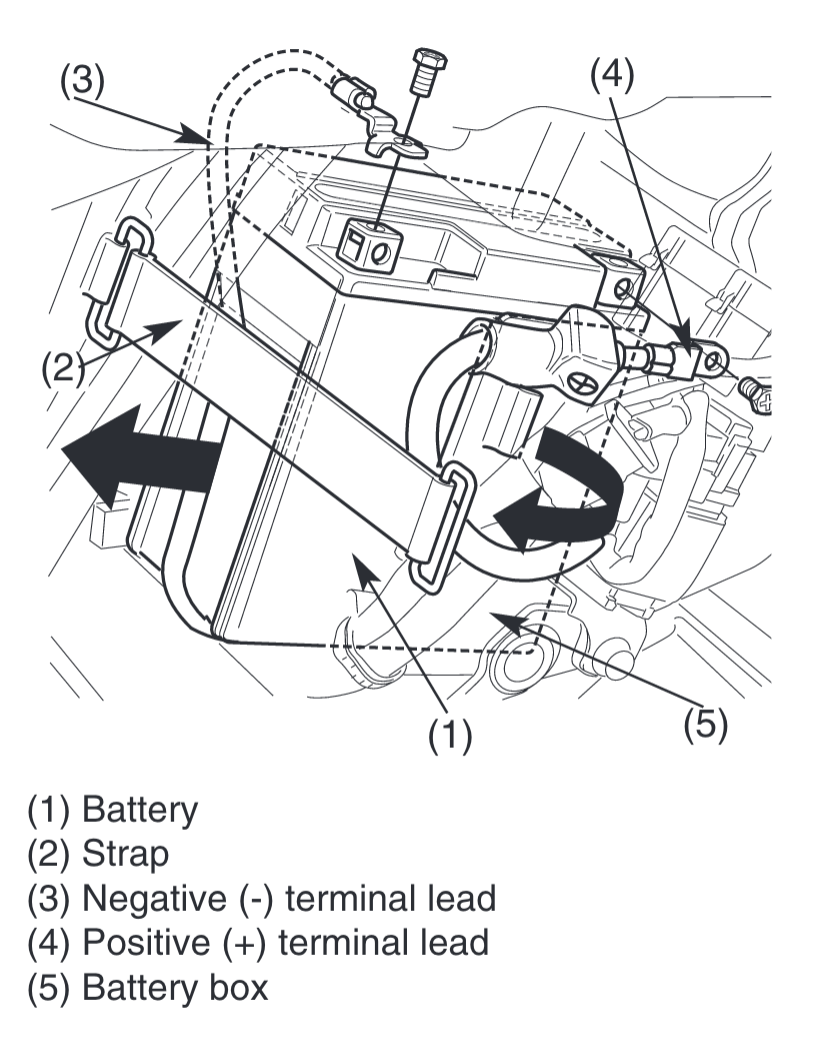 It doesn't show where the two smaller wires go, but as suggested by @alephzero , they likely go to the chassis or some other connectors -- definitely not the battery itself. The "L" shaped connector is your positive lead, and it looks like the bend is meant to go around the battery's cap (a sort of keying mechanism); similarly, the flanged connector is your negative lead and is designed to go around the top of the negative post.

EDIT: Since the other two connectors are standard ring terminals (no keying/etc) they probably connect onto standard screw posts with an appropriate nut to secure them. If you're lucky (or just had the foresight to put the nuts back on the posts so you didn't lose them, leaving two posts with no wires and loose nuts) the posts should be relatively self-evident. Hold the battery cables into approximate position (especially the positive lead, which is tethered to one of the other cables) and the play in that unknown cable should give you a much smaller search area in which to figure out where it should connect to.

There is an online service manual here - explore some of the following pages as well as page 39: https://www.manualslib.com/manual/1068381/Honda-Cbf600sa.html?page=39#manual

It's pretty clear that the two "big" connectors go to the battery, and (unsurprisingly) the one joined to the wire with black insulation is negative.

As far as I can make out, the other two "ring" connectors (black and yellow wires) that are joined to the negative don't go to the battery, but some other places. It would be a reasonable guess that they go under some mounting bolts for components attached to the bike frame. It doesn't make much sense to split a cable three ways and then connect all three ends to the same place (i.e. the battery itself).

If you position the battery negative battery terminal to mate up with the battery, you will probably see where the other two cables are supposed to go. Unless somebody has deliberately bent them out of shape, they appear to be "pre-formed" to fit neatly to whatever they connect to.

Not the answer you're looking for? Browse other questions tagged motorcycle battery abs battery-cable or ask your own question.

6
How to put 1997 Toyota 4Runner in neutral with dead battery?
20
Should negative trickle charger clips be attached to the battery negative terminal, or ground?
1
Hyundai XG350 - Positive or Negative Ground Battery?
17
Why is gas around a car battery only at risk of ignition from jumper cables?
1
How to determine scooter wiring polarity without tools?
1
What is this liquid/anything to be concerned about?
3
Correct gauge of wire for earth/ground
3
Broken Ring Terminal on Positive Cable
2
Waterproofing small electronic device on motorcycle
0
What is a point of contact to measure the live (red) electric cable?