Can't fill car up with gas

I can no longer fill up my gas tank in one go. This started gradually over a few months, initially only happening at one pump at the closest station.

Now, however, I can't get more than a gallon or so before the pump clicks off. I then have to pull the pump out, wait a few seconds, after which I can put in another 3/4 of a gallon or so.

I've looked at other posts which all indicate a bad EVAP solenoid, or blocked vapor line from the tank to the filler neck. I recently replaced the solenoid. For kicks, I went ahead and pulled it off and I can blow through it easily.

Occasionally, I get a "Check gas cap" message on the DIC, though the cap is secured. I also replaced the cap - no effect. The message is intermittent and shows up every 2-3 weeks, and always disappears fairly quickly.

Suggestions? Where to next?

Also, I've just discovered that the oil change idiots overfilled the engine by about 3 quarts (capacity is about 5). Not sure if that would cause this - seems unlikely.

Removing the CAN fuse didn't have any effect. However, I disconnected one of the vapor lines above the gas tank, and was able to fill it up in one go. This is one of the lines I cleared with the air compressor, so I'm guessing the obstruction is on the other side - in that big array of ominous black boxes.

I'll check the canister outlet for spiders later, but at least this is progress (as in, I no longer feel like a redneck who has never had a full tank of gas). (I'm from Oklahoma - i'm allowed to say "redneck.")

Here's the line I disconnected: 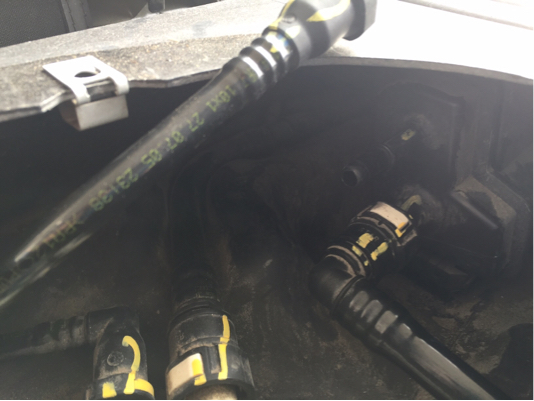 Slow or no flow for fuel in means no or low vapor flow out the vent system. Steps to test for testing for a blocked vent:

We pulled several live spiders from a vent tube recently.

Not the answer you're looking for? Browse other questions tagged fuel-tank evap fuel-cap or ask your own question.

6
The tray under my gas tank is dented. What should I be aware of before draining and removing my gas tank?
5
What is the name of the part to which the gas cap connects?
1
fuel tank always be full at 90%
3
Cleaning the gas cap to rule out that tightness is the cause of the "check engine" light
1
Mystery White / Gray Dust on Motorcycle Gas Cap
2
1986 Dodge B250 - EVAP cannister removed, pressure in gas tank, ramifications / solutions
3
How does EVAP interact with a vehicle?
2
Does every modern car have an evap vent valve?
4
Getting Stale Gas Out of a Gas Tank w/out Dropping the Tank