I was wondering which car parts affect the alignment of the car. In other words: which parts should be checked to be in good condition before getting an alignment?

For example, if the tie rods are in bad shape, the toe will be out as soon as you drive out of the shop.

There are a few components to understand regarding alignment: Toe, Camber, and Caster. In addition, every suspension component, from bushings and ball joints to control arms and shocks, plays some role in the primary alignment angles.

Toe is the angle a wheel makes relative to the forward axis when the steering wheel is centered.

On the above image, the black line represents zero toe angle. As indicated, the red and green lines represent toe in and toe out, respectively. While an individual wheel can have either toe in or toe out, a set of wheels (front or rear) can also have a total toe or thrust angle.

On the front wheels, if both wheels have +2° of toe, they both toe in and the vehicle has a total toe in. If one wheel is +3° and the other is -1°, one wheel has toe in, one has toe out, but overall, the vehicle is still toe in because the closest neutral position (where both wheels have the same angle) is positive.

On the rear wheels, the total toe is called the thrust angle. It's especially important on RWD cars because you can't correct for it with steering. Most rear wheels don't have any steering capability. As a result, if the rear wheels both point the same direction (one has positive toe and the other has negative toe), you get a net thrust toward one side of the vehicle.

As seen above, the rear-right wheel toes in while the left-rear toes out. This causes the vehicle to turn right because of the net torque vector relative to the vehicle centerline.

Toe is controlled by the tie rods on the front and is typically set to slight overall toe in, which enhances vehicle stability at higher speeds (at the expense of turning response).

Rear suspensions very significantly. A live axle rear might not have any adjustable toe. Instead, adjustment requires remounting the axle bearings on the leaf springs. A dead axle (for a FWD car) will be similar. Modern independent rear suspensions have a variety of mechanisms to adjust toe. Trailing arm and semi-trailing arm may use cam bolts to adjust linkage lengths, controlling toe. Multilink suspensions may have tension arms with cam bolts, but typically, rear toe is more difficult to adjust.

Camber is the angle the wheel makes to the road when looking at the front of the vehicle. 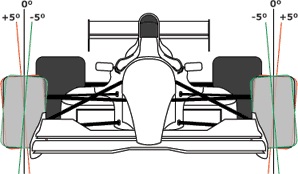 Camber is typically only adjustable on independent suspensions. Live or dead axles hold the wheel at a fixed angle relative to the beam, making it nearly impossible to adjust. For MacPherson Strut-based suspensions, camber is typically only adjustable by moving the physical mounting location of the shocks. By moving them inward or outward, you change the camber angle. Few cars provide this option natively, so special mounting plates are fitted as an aftermarket adjustment solution.

One type of suspension, however, permits easy camber adjustment. Unequal A-arm, or double-wishbone, suspensions control camber with the upper arm mounting location. This is also typically controlled by a cam bolt.

Caster is the angle the vertical travel line makes with the road when looking at the side of the vehicle.

Of all, this is the least adjustable. Live/dead axles don't allow adjustment (easily). MacPherson Struts don't allow adjustment (without aftermarket mounting plates). Double Wishbones usually don't allow adjustment. This is typically set by the design of the suspension geometry and won't go out of alignment unless the bushings are worn or you incur major suspension damage. The lines on the above image actually depict how the center of the wheel travels when it moves. Typically, the wheel moves back as it goes up (positive angle). This is also the axis about which steering pivots. Steering does not rotate the wheel about the Z-axis (vertical axis), but rather about the caster axis.

I've never heard of negative caster angles. While, again, you gain maneuverability with increasingly negative values, you lose stability (often the tradeoff). At negative caster angles, you can actually experience "hardover." Typically, if you are in the middle of a turn and release the steering wheel, the car tends to self-align back to driving in a straight line. The caster angle causes this. If you had zero angle, the car would maintain the turn indefinitely. If you had a negative angle, the steering wheel would turn to decrease the turn radius until it hit lock (a hardover condition).

To actually answer your question, pretty much everything contributes. Tie rods are the primary alignment mechanism, and as such, should have the ball joints inspected for signs of wear. You might also want to check that the jam nut is actually jammed properly to prevent the alignment from slipping. Common wear items are bushings and ball joints, so inspecting those will help ensure you maintain alignment. Secondly, the wheel bearings will wear over time. You also want to keep an eye out for damaged parts, such as bent control arms. While unlikely, damage happens and will severely impact your alignment.

Assuming a chassis is straight to begin with.. All suspension and steering components must be in good working condition without any excess play for a wheel alignment to be carried out successfully. Any areas requiring maintenance/repair should be attended to beforehand.

Vehicles should not have any damage or excess play in ball joints, wheel bearings, struts, track rods/ends or any associated joints/bushings.

Not the answer you're looking for? Browse other questions tagged alignment or ask your own question.

7
Wheel Alignment: Just how bad is bad?
5
alignment not straight after alignment
1
Wheel alignment. Should I have said something?
3
Alignment: how much pull is OK
7
Tire alignment Issue
1
Which of these things knocked my wheels out of alignment?
1
Solid front axle alignment - jeep wrangler
0
2006 Honda Accord can't be aligned by shop