Why Ride by wire when the fuel injector is there

I feel confused on understanding this system on
1. The difference between FI and Ride by Wire
2. how it improves the fuel efficiency when compared to the ride by wire system and conventional system.

I have gathered some data to make better understanding as below:-

I have studied that "Ride by wire", just replaces the wire from the throttle to unit (like intake manifold) (which decides the amount to open the butterfly valve).

And also, I have studied that, Fuel injector does a lot than just injecting the fuel into the engine. Like, eventhough u have given the throttle, it will sense

and decides the amount of fuel to engine.

Could any of the guys help me to understand this better.

The difference between FI and Ride by Wire

Fuel injection means that the flow of fuel to the engine is controlled by the ECU, as opposed to a carburetor. (of course, there's more to it than that)

Ride by wire means the butterfly is opened by an electronic motor, as opposed to a cable.

No, that's really all the injectors do. It's a fancy garden hose whose is nozzle turned off/on by the ECU.

That's the mass air flow meter and/or mass air pressure meter depending on vehicle. It only measures volume or pressure, not oxygen content. Oxygen content is determined in the exhaust by O2 sensors.

I assume you mean on a motorcycle? That's a sensor, usually just called a tip-over sensor or similar. It's mechanism is similar to a kill switch, usually.

Determined by the ECU which then stops injecting fuel either by fuel pump and/or injectors.

And/Or cam position sensor. The Crank position sensor indicates crank position to the ECU. This determines engine timing which determines the triggering of the fuel injector and spark plugs. The ECU also uses this measurement for other calculations though such as RPM, engine load, etc. (just off the top of my head)

and decides the amount of fuel to engine

The injector has a nozzle size, but the ECU determines how long the injector is open.

So, then, what may be the use of removing the wire to the butter fly unit

Notice the shape of the cam lobe attached to the butterfly will cause the butterfly to open more gradually at lower throttle input. 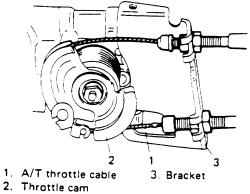 Comfort/Sport/Race mode. The throttle modulation can change at the push of a button.

In some cases, the TPS and throttle control module are combined into one component keeping things simple.

In general though, it centralizes control to the ECU which is ideal when engineering an engine since ECU tuning doesn't require parts changes.

Not the answer you're looking for? Browse other questions tagged fuel-system fuel-consumption fuel-injection fuel-injectors or ask your own question.

3
What is a replacement Fuel Injector for a 1985 Mustang SVO?
29
We have fuel injection, why not air injection?
3
Why do injector prices vary so vastly?
5
Why isn't injection managed to use the entire intake stroke?
4
What is the the base fuel calculation in a fuel injected vehicle based on?
2
Best practice for replacing fuel injector o-ring?
2
Leaking fuel injector
1
Running fuel injector outside the engine