I have a 2009 Kia Rio, and one of the studs for a rear wheel got broken (probably the local tire shop's fault, but it's my word against their's).

I went to an auto parts store to get a replacement. However, the diameter of the end closest to the head (that actually meshes with the hub) was too small, and I could easily seat the head of the stud flush against the hub and spin it with my fingers. Obviously the wrong part.

I figured this was simply a case of the aftermarket stuff not being quite right, so I went to the dealer. They sold me an equivalent part to what I got at the auto parts store. I explained the situation, and they went around and around, but couldn't find the right part.

Any ideas for what I can do now? If the dealer can't even give me the right stud, how do I go about getting one?

Edit: Previous owner of the vehicle back that corner of the car into a concrete pole, and it had some very minor damage to the bumper, taillight, and body when I bought it. I suppose it's possible, though I feel highly unlikely, that there was damage to the wheel and hub, that they had an aftermarket hub put on, and that the aftermarket hub has slightly different studs? When I have a chance, I'll try to verify if this is the case...

I realize this post is a years old but just in case anybody comes along who needs help with this. I just, in 2022, had the exact same issue. After visiting all the auto parts stores multiple times I finally found "Dorman AutoGrade M12-1.50 Thread Wheel Lug Bolt part 610-265" at O'Reilly's. It's listed as a generic wheel stud and it's a bit longer than the original ones so you'll need to get open-ended lug nuts but it works.

The studs for the Kia Rio appear to have a knurled shoulder that drives into the hub. The ones I found online look like this: 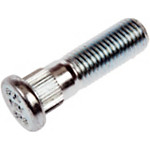 The ones I found spec the knurl diameter at 0.508 or 0.511 inches and claim to fit from 2003 to 2105. If you have a dial caliper try measuring the original stud, the new stud, and the hole in the hub. That should give you a feel for where the problem is.

One possibility is that the hub has been damaged and the area where the studs fit is now oversize. If the difference is significant, it is likely that the hub is either not an OE hub or that there has been a manufacturing change somewhere along the line.

Not the answer you're looking for? Browse other questions tagged wheels dealer or ask your own question.

1
Replace front wheel studs '99 saturn
5
What is this called - rear wheel edition?
3
Should I throw away my wheels after they bumped in the sidewalks?
7
Is this a wheel spacer?
3
Wheel removal solutions
5
Wheel spacers don't fit
4
wheel offset and effect on car geometry