I managed to turn a routine brake job into a bit of a minor nightmare by having one of the calliper bracket bolts break off. One bit is stuck inside the calliper bracket. I don't know exactly why it happened -- I think because the lack of space my socket was not on perfectly straight -- but it did and I'll have to deal with it. 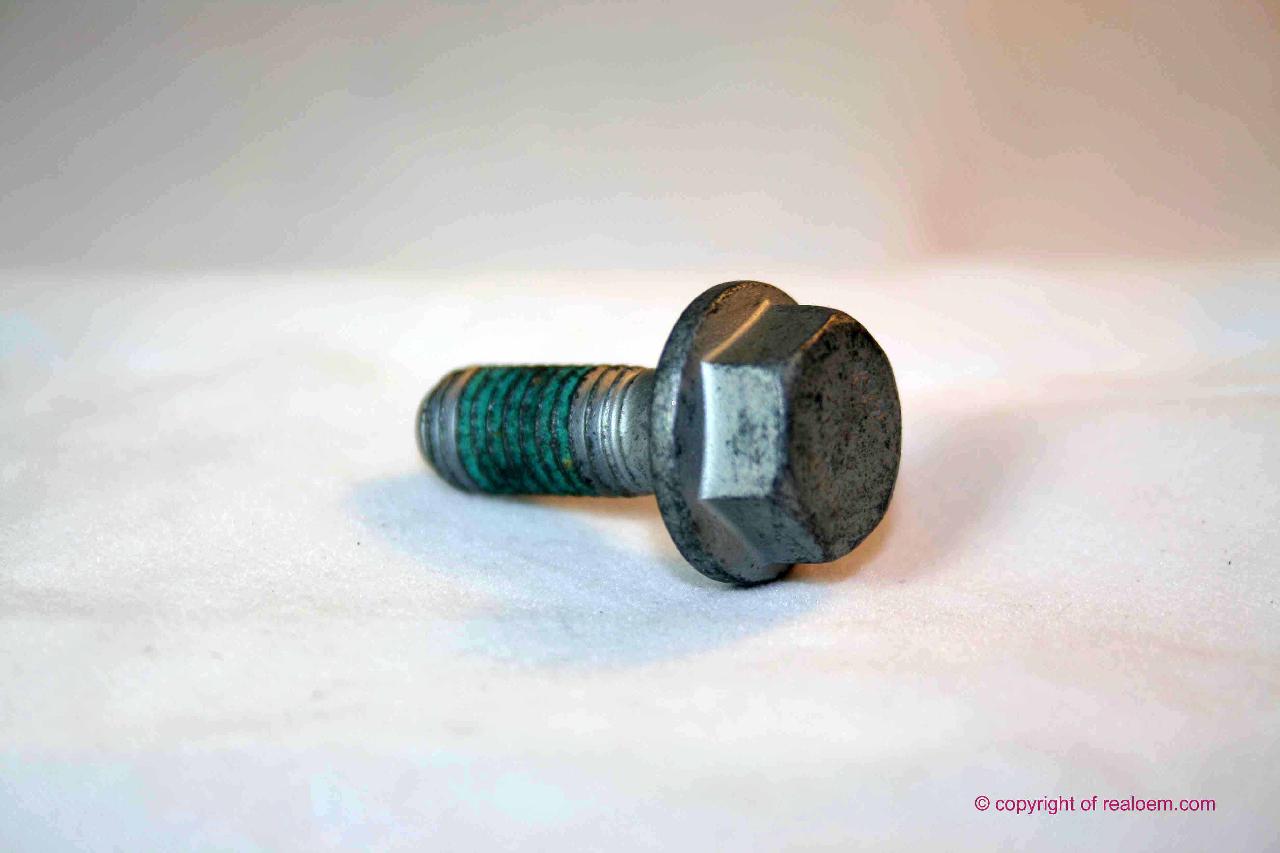 After a lot of swearing, I calmed down a little and realised there were two things I need to do:

I have a screw extractor kit and I've used it before successfully; I just hope it'll work on a screw as stuck as this one. I haven't tried it yet, since it's nighttime here and I'm not allowed to make much noise.

Finding the replacement bolt, ironically, seems to be the harder problem. While I know which part I need (M10x26.5), I can't seem to find the exact replacement bolt in my country. I could order from Amazon or ebay, but it will take at least two weeks to get to me -- and I don't want to wait that long, so I was thinking of just picking up a very similar bolt from the local DIY store. Is this safe or are these bolts not up to the same standard? I would of course look for a bolt with the same diameter as the original, but perhaps also slightly longer (27, since 26.5 is almost certainly not available) and perhaps use a washer if they don't have the wide head screw (see picture).

The only alternative I can think of is the scrap yard, but these are fairly rare where I live and I'd have to get lucky as well (to find the right car with the brake system still on). In short, even this alternative would be a heck of a lot more trouble than just going to the DIY store and buying a replacement bolt.

First of all some nitpicking: M10x26.5 isn't the correct designation: You need also the thread width. Car manufacturers are very eager to use some unusual fine threads.

My personal strategy would be the following:

Screw out the second bolt and go to an industrial supply shop, do not go to the DIY shops. Show them the bolt, ask for a second one and tell them that it is used to keep your brakes attached to your car. Should the shop not be stocked of this bolt they perhaps can order it or give you at least an indication on where to find it. A good indication would be the "Würth" chain, although you probably need to buy an entire box.

Make sure you get a bolt of the same width, length, thread width and most important: the same grade (visible by a stamp on the head of the bolt). It is ok if your new bolt comes without thread-locking micro-encapsulation, just make sure you use some thread-locking compound on installing.

Some background information: Most of the time they use an 10.9 grade bolt for safety critical uses. 12.9 is used in exceptional cases (when the engineer messed up and they need to improve the strength of the fastener?). 8.8 grade is standard industry stuff and everything under 8.8 is some rubbish stuff they peddle in those DIY-shops.

Edit: The comment from @alephzero is a better answer than mine: The bmw dealer ought to have that bolt

If you can get a bolt that fits correctly from a hardware store, it should be acceptable for a bit. The bolts used in automotive are generally harder and more resistant to shock, shearing and twist whereas "construction" style bolts are a bit softer so that they have a little flex.

If you wanted to use a construction type bolt (like what you'd find in a hardware store) for a couple weeks it should be ok, I'd just avoid any hard braking situations. Drive a little more relaxed. Then order one online and replace it with a proper one.

DON'T try to make one fit if it doesn't. Make sure it fits exactly or you'll end up getting another bolt stuck or sheared.

KEEP IN MIND that these bolts are not intended for this use, so the faster you replace them the better.

Also, if you allow the stuck bolt piece to soak with some kind of penetrating oil, it will make it easier to remove. Just saying... :) cheers!

UPDATE: The one problem I've run into when trying to purchase generic bolts to replace specialized ones is the thread patterns. Often certain threading will be used for certain applications, and different threading for other applications. This is where the "make sure it fits exactly" point comes in. You may find a bolt that has matching length and diameter, but the threading is a little but off. Forcing this bolt in will result in a snapped or jammed bolt which will be yet another nightmare to remove.

I would recommend using the correct part, as it's likely to be a different material specification from the cheap ones you'll get in a hardware store - in particular, they will probably be high-tensile, 10.9 grade.

I seem to remember that BMW's dealership network is pretty good for spare parts, so they ought to be able to help - just phone or visit the parts desk at your local dealer.

Alternatively, there are many online parts suppliers - when I had to do the same job on my Subaru Forester (a previous owner had replaced the correct bolt with a different one, which had seized solid!), I was able to get a complete caliper fitting kit, with bolts, new slide pins and boots, and the correct quantity of new grease, from brakeparts.co.uk (no connection, except as a customer!) - I'm sure similar firms exist in Belgium (or in Germany, as they'll probably deliver across the border)

Not the answer you're looking for? Browse other questions tagged brakes brake-calipers or ask your own question.

10
What can I do to keep a threaded bolt from falling out of its slot?

4
Brakes locking up when backing up
2
Handbreak return spring Vauxhall/Opel Vectra
5
Front brake caliper mounting bracket out of alignment with rotor
6
Skill level and safety critical risk level for ABS module replacement
3
Should I Replace My Rotors
8
What grade of bolts should I use for motorcycle brake hardware?
1
Car pulling to left, gets worse when braking, often better when accelerating (especially when warm)
3
Are these unmarked bolts OK for brake calipers?