The engine I'm rebuilding (Skoda Estelle 120) uses a starter that turns counterclockwise. It is mounted from the gearbox to the engine with two studs. I can't find a replacement for it, all the guys I know with this engine have the same problem and we are running with the same motor that came from factory, fixing them so many times.

I want to adapt a different starter, that turns clockwise, as "normal" cars' do :) So I can get new spares. For this, I need to change a few things but basically the starter orientation against the engine: it needs to be from the engine to the gearbox. This is independently on the bendix number of teeth, etc, which I know are part of the equation.

My question is: since I can't find anyone (easily) that can assume building and welding the different support mount, I can make it with steel...but can I bolt it against the engine block wall? I can either put stubs, or pass through bolts to secure the support mount, then attach the starter to that mount. Or I can make the support mount be fixed between the engine and the gearbox, filing its thickness on both surfaces and attach it with the same bolts they use to get assembled together.

On the sandwich mount idea, I did some quick graphics to illustrate better what I mean. Nothing exact, just the idea. Any comments are welcome!

Both facing surfaces from the gearbox and the engine could be debasted to be able to insert the support mount...

If the flywheel vs bendix is much a headache, I could put the same flywheel that matches the starter. It depends on other many things tho, so it will be another project. 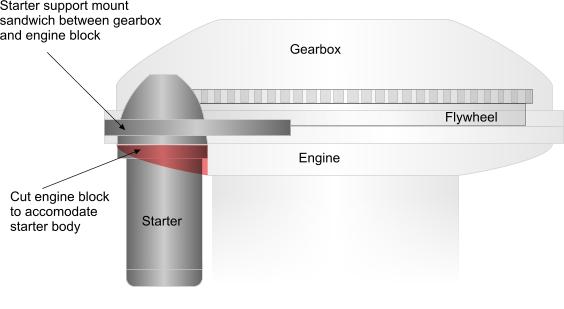 I can use the the stub for hanging the exhaust silencer, and convert the existent bolt on top to a stub (dark gray circles). Then add another two passing through bolts to secure the mount better. 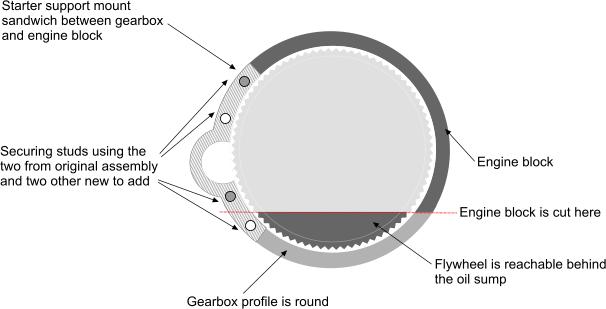 The thing would look like this, in some quick 3D 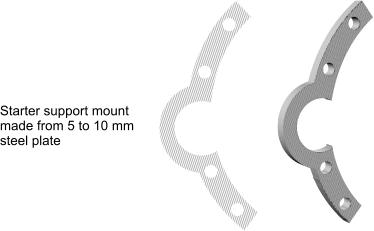 Browse other questions tagged starter skoda adapt estelle or ask your own question.

3
New starter overstarting
7
Distinguishing between mechanical and electrical failure in ignition diagnosis
8
Starter Motor Intermittently will not engage
5
95 Integra LS Starter: Procedure to replace plunger and starter
4
Can I hold an engine (with aluminum block) using its gearbox studs?
3
Adapting transmission half axles: best way to?
1
Dead battery or bad starter
2
Starter Clicking sound
1
Starter solenoid clicks solidly. Starter won't spin
13
Car won't start after sitting for 2 years even with a jump. Is it a starter or alternator issue?