Before I dive into a water pump replacement - how would I test it?

I have replaced the thermostat, hoses and radiator - all of which needed it. Now the car will go to red (hot) intermittently, and will stay normal at idle, or a little above half at idle. When I drive however, it will go hot, sometimes all he way, sometimes not. The upper hose is very hot, lower is cold. Heater blows hot - until the temp goes way high, then the heater blows warm - as soon as the temp goes to normal the heater blows hot again.

System is bled, not losing coolant, no water in oil, good color on fluid. any suggestions?

What could be causing this condition?

When cooled down the radiator seems to be full, the cap is a new one, the pump I have no idea - although the timing belt (and i would hope water pump) were marked 40,000 miles ago on the timing belt shroud. While running i pull cap and the coolant seems to be still, when i rev engine it will burp out of neck.

Sounds like you have poor coolant flow. If the radiator is new, then the most likely culprit is the water pump.

It sounds like you're boiling the coolant which would be why the heater merely puts out warm air when the temp gauge goes to too hot.

when your looking at the still coolant the engine is at normal operating temperature? if it's not, the thermostat will be closed and not let coolant flow through the radiator. If you do not see flow or much flow without revving at operating temp then I would look into replacing the water pump.

https://www.youtube.com/watch?v=QTVPF1WdtnI watch at 2:40 and see if you have seepage too. I still think it is strange that it will work then basically stop.

Well that shoots that easy fix in the foot.

Yes getting hot water to your heater core inside the car would mean the pump is functioning and pumping water. The sudden cooling down is really strange that is why I thought of boiling, because water pumps don't just shut off unless they are electric or you broke a belt.

Has it actually gotten hot at all? has it boiled over? Go get, borrow, buy, rent, or loot an infrared temp gun. let the car get hot have someone inside to tell you when it starts overheating. Point it at the upper radiator hose and see what happens the entire time the car heats up. We might find that your thermostat opens lets all the cold water rush into the engine then close suddenly. This would be why the heater core cools down. This would also mean the issue might be the gauge or the computer cannot cope with the sudden temp change and goes high rather than low.

you should also point it at the heater hoses going into the firewall.

We are looking for a sudden rise in temperature as the thermostat opens letting coolant flow through the upper radiator hose. This should show a slow crawl upwards then the temp gun should read a rapid climb to about 100 deg c as it opens I think it will then stop or cool off from there. 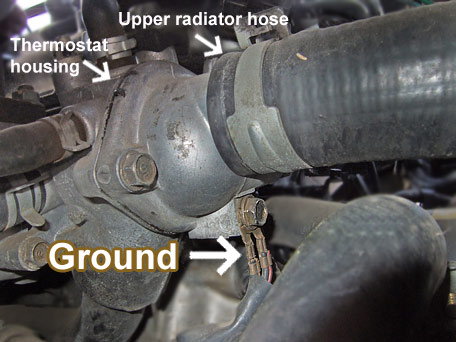 If it is cold where you live this would exacerbate the problem since a closed thermostat would let the coolant in the radiator get extra cold. This could potentially cause engine damage in the form of warped heads cracked block or heads and other potential problems. It would be the same as dumping a hot 100 deg c pan into icy cool water. To help avoid this put some cardboard in front of the radiator leaving just enough open radiator to keep the thermostat open while driving but not too little to cause real over heating.

Well, I drove to Salem Honda and paid $45.00 for a thermostat today - after going through a cheap one and a more expensive one at NAPA. The Honda part appears to have solved my problem - that and I replaced every sending unit coolant related on the car - I think it was the thermostat though.

I have yet to road test it, but it has been idling in the driveway for half an hour its at 1/3 on the temp gauge and I have nonstop hot air from vents.

Not the answer you're looking for? Browse other questions tagged honda cooling-system accord overheating cooling or ask your own question.

5
2005 Subaru Forester XS overheating
7
Why does my overheating car cool off on declines?
3
Temperature gauge needle is on Hot, but engine is not overheating
2
Dodge Ram - no heat at idle but have heat when driving
1
1994 Honda Civic DX Hatchback Overheating
1
Temperature Gauge HOT 2008 Honda Accord