1997 Chevy Blazer with 4.3: Transmission fluid overfilled by the shop, now it's leaking. Is it from an overflow vent?

Title pretty much says it all, but here's the background:

I had my 1997 Blazer (4.3) in the shop to fix an oil leak. They identified the leak as a small hole in the oil cooler lines and replaced them. Two techs were involved. The first tech thought it was a transmission leak, his evidence being that I was low on fluid ...one problem, the leak was brown fluid, not red, so this made me doubt his talent. Fortunately, the second tech stepped in and found the actual leak at the oil cooler lines. So I decided not to worry and authorized the repair.

In addition to the oil cooler line replacement, they also topped-off the trans fluid. As per usual, I drove a short distance down the street and checked both fluids while doing a quick inspection for post-repair leaks, for example, from a drain plug. I noticed BOTH the oil and the trans fluid seemed a little overfull, but I thought, "well, they're the professionals, I'm sure they know what their doing," and I went on my way.

[Aside: I actually had to return the vehicle the next Monday because it started leaking again. Profusely. It turned out they reused the o-rings at the oil cooler line fittings, and these didn't seat properly. Fortunately, they were honest with me and properly fixed it at no added cost.]

Fast forward to now, about a week later. I have probably driven 1500 miles since that repair, mostly highway miles, and I'm seeing a transmission leak. It's definitely red trans fluid. So I called the shop and spoke to the better tech, and he ensures me that these are "tough transmissions" (mine has 245000 miles, original power train) and it's most likely coming from an overflow vent, and that I can bring it by and they can extract the overage.

What worries me, though, is I've been researching online trying to identify common reasons for trans leaks, and guys on the forums are insistent that overfilling a transmission can be a sort of death-blow...and this has me particularly concerned that my old, aged system would be even less likely to resist such damage.

I apologize for the winding back story...but I thought the character of the technicians might have some bearing on your answers. Is the guy being straight with me? Is my Blazer transmission relatively tough, and the new leak I'm seeing is just seepage from an overflow vent...in spite of having put 1500 miles on it while overfilled?

Update, Nov 2018: I don't want to jinx it, but it's almost exactly two years later and this transmission is still holding together. Current mileage is 273k. If memory serves, I had the shifter seal replaced, and I have not seen any notable leaking from the transmission since this incident. ::knocks on wood:: ::crosses fingers::

While I would bet the mechanic believes he's being straight with you, I really don't know what he's talking about. The transmission in your vehicle should be a 4L60e. These were used in just about everything during that time which used a four speed overdrive automatic (ie: Z28 Camaro, C/K1500, etc). While these are decent transmissions, I don't think anyone would claim them as being tough (and this is coming from a GM guy). Behind the 4.3l V6, it should do pretty good, but it doesn't mean they are truly tough transmissions. They are usually the weak link in the drive train of full size trucks of the same year.

That said, the leak is present. It really depends on where it's leaking from at the present. To my knowledge there isn't really an overflow on these, but more or less a breather tube. The problem with the mechanic's over the phone diagnosis is, the transmission would have to be HUGELY over filled for the tranny fluid to come out where the breather is at ... it's located at the top of the transmission, as seen in the following image: 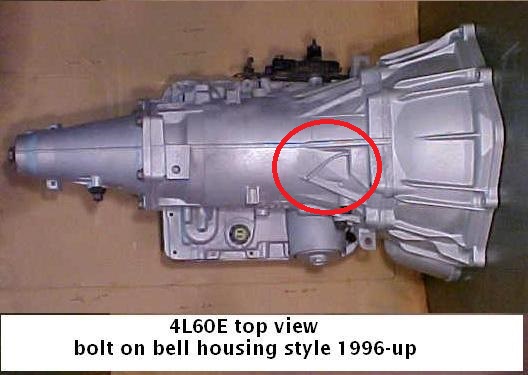 If the leak is occurring on the right side (passenger side in the States) of the vehicle, this may be the case, but to me it's highly doubltful.

It is, as your internet coleagues have stated, a terrible thing to overfill a transmission. This is whether the transmission is new or old. It's worse for older transmissions, but still isn't good for new ones either. As transmission fluid heats up, it expands. This is why you should check the fluid when it's hot (in most vehicles). Since it expands like it does, when it's too full, it expands more than it should, which causes greater pressures within the transmission. This can cause leaks through seals, such as where the torque converter is at. Once a leak occurs, you cannot simply force it to stop leaking by removing the excess fluid. A repair will almost certainly be needed if the integrity of a seal or gasket has been compromised.

Not the answer you're looking for? Browse other questions tagged chevrolet transmission transmission-fluid atf-leak or ask your own question.