Will boring a cylinder affect its longevity thereafter?

I had to deal with a worn out cylinder recently and was suggested to bore the engine which seems perfectly normal.

I am assuming the compression ratios will change so what do mechanics do to compensate for the change in cylinder dimensions? do they use the old piston or get a new one?

What are the disadvantages of over boring a cylinder? 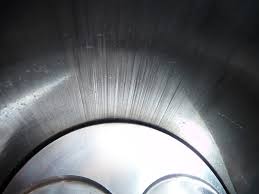 After boring and honing, the cylinder should look something like this: 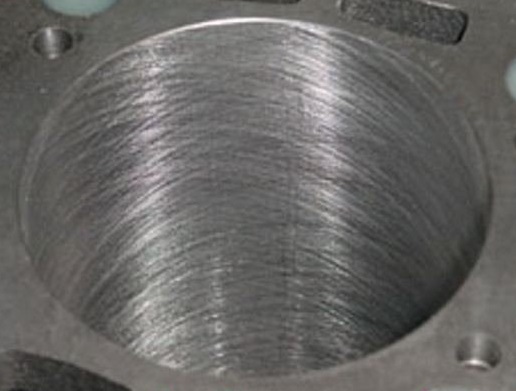 In the picture you can see the cross hatching. This is caused from the honing operation and helps the rings "seat" during the break in process. When the term "seat" is used, it means the ring is worn down slightly, allowing it to mate to the cylinder wall, and form a seal which holds compression in the cylinder/combustion chamber, as well as keeping oil out. A secondary purpose of boring the cylinder is to ensure it is completely round. To do this correctly, the shop should use a torque plate, which is attached to the deck during boring and final honing. This simulates the head being attached to the block during the process, so when the head is finally attached, all the little variances are accounted for and the cylinder is as close to round as can be made.

I am assuming the compression ratios will change so what do mechanics do to compensate for the change in cylinder dimensions?

The static compression ratio (CR) can be changed somewhat when the cylinder is bored. This is due to the small amount of difference from the over bore. When doing the calculations for the CR, the new volume from the enlarged cylinder must be taken into account. Even with the small amount overall which is seen when the piston is at top dead center (TDC), there will be a change, however slight. More than likely there will be other factors which will weigh heavier on the CR than just this, such as the dish or dome volume of the piston, combustion chamber size, and thickness of the head gasket.

Do they use the old piston or get a new one?

If you over bore the cylinder, you must use a new piston. When clearances of the piston to wall are measured in the thousandths of an inch (or sub-millimeter) and you bore the cylinder +.010" over (or +.030" or whatever), there is too much gap for the old piston to take up the slack. More than likely, if the cylinder is worn out, it's usually due to the combination of the piston and rings which caused it. The cylinder gives back as well as it takes, so these parts are worn out as well in most cases. New pistons are a given.

What are the disadvantages of over boring a cylinder?

There are only a couple of minor disadvantages to over boring a cylinder. When you bore the cylinder, you have made the cylinder wall thinner. This can lead to over heating in some cases, depending on the block. Some blocks are prone to cracking in the cylinders after an over bore. In such cases you need to ensure the walls are sonic checked to ensure the wall thickness can support your power goals. It doesn't make sense to bore the block, just to have it fail after a short period of time.

Other than that, the only other downside I can think of is the cost of doing the machine work. Realistically, though, it is a lot cheaper in most cases to have the machine work done than it is to get a new block. If you were to get a new block, you'd still have to do the machine work on it. Plus, used blocks are actually better in most cases (as long as they are found structurally sound) due to being seasoned. When a block has gone through heating/cooling cycles several thousand times during normal use, the metal in the block becomes more aligned, which reduces stress risers. I'll just say, the metal becomes happier.

All-in-all, there really is no downside to an overbore, as long as the block can take it. It's usually far cheaper to have this done and rebuild the engine than it is to buy a new one, or in most cases find/purchase a used engine. Obviously it will take longer, but the end product is worth it most of the time.

technically yes. You can only bore them out so many times before they will need to be replaced.

Each time you bore it you can usually expect it to last just as long as it did last time. Once it is worn out again you will need to bore it again or replace it if its walls are too thin.

Typically compression ratios don't change enough to warrant any changes. If this is a high performance build then you may end up using a flat topped piston for extra compression but it does not sound like this is your goal.

over boring will mean you can't bore as many times for future rebuilds. If you have a thin spot on a cast iron block this may become even thinner and can lead to warping cracking or overheating. typically if you want more power you can overbore the engine to add volume which will increase total power output.

They must use new rings to compensate for the alteration in the cylinder. Old rings won't seat correctly.

You take off a bitsy bit of metal each time, so eventually, you wear down the cylinder to the point where it no longer supports the pressure.

Loss of fuel economy unless you bore it out enough to put in larger rings.