Does increased load of electronic devices from your car reduce fuel economy?

Phrased another way: Does the alternator always have the same amount of mechanical drag on the motor, or does it vary with charging requirements of the battery?

Phrased yet another way: If you go camping and plug a 12 volt cooler, a laptop for watching movies, 5 phones for the whole family, etc into the car's battery, is one consequence of this that the alternator will respond by dragging more on the engine. Or, would it not have any effect on fuel economy?

Actually I Google'd this but only found theoretical answers.

Except for the cooler, your hypothetical load is pretty small, so you might not notice the loss of fuel economy, but it will be there.

You'll also loose fuel economy if you open the windows at speed, let your tire pressure drop, carry around excess stuff in the car, turn on your lights in the rain, etc.

Quite some people wrongly think that car alternators are just like these old dynamo's that drag on the tyre of your (old)bicycle: 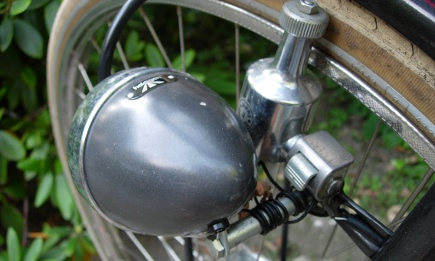 The drag that thing has does not vary if you'd switch on- or off the lamp that's connected to it. In the vision of this common misunderstanding you'd throw away the energy of the alternator if you don't use it. It's not like that in cars, and bicycles for that matter. (sorry i'm dutch so bicycles are love, bicycles are life)

You can see a car's alternator just like the engine and the clutch. At each rpm you can vary the pressure on the clutch to send more or less power to the wheels. It's also like that with a alternator. The stronger you make the 'magnet' in the alternator that is driven by the engine, the more drag the alternator has, and the more energy you generate. You can see for yourself; if you turn over the alternator by hand while it's disconnected, there is virtually no drag beside the friction in the bearings.

So yes, more electrical load consumes more fuel. A fully loaded alternator can consume 100 Ampere(boils down to ~1.3kW) if you go crazy with your radio. That's roughly 10% of the total load on the engine at 100km/h. Most people won't go that far though. Your beams, and charging laptop laptop won't make you notice a difference on fuel consumption.

By the way, installing a bigger battery in your car won't have effect for long. If the alternator can't keep up with your current consumption, you'll slowly drain and deplete the battery and kill it. It's only there for you to be able to start your engine. Theoretically ou could disconnect it as soon as it's started.

As already said, load on the alternator puts load on the motor, and so costs extra fuel. In my car, I can clearly see a drop of about 50RPM when switching on the headlight, the blower (to max) or the rear window heating when the car is idling in neutral.
The drop is compensated by the motor control system within a second by injecting a little more fuel.

Let's have a look at your devices:

The power needed to maintain speed depends a lot on the car, especially its size and aerodynamics. Just to give some numbers: I found 5'000W to maintain 50km/h (31mph) and 16'000W for 100km/h (61mph) for a streamlined sports car. I guess a reasonable car for camping needs twice the power. For this car, your electronic devices add 4% at 50km/h or 1.25% at 100km/h to the load of the motor, which is not so much.

Or a different approach: If the fully loaded car weights 2'000kg, the energy needed to accelerate it to 50km/h could also power your devices for 16 minutes. And instead of accelerating from 0 to 100km/h, you could power the devices for 64 minutes.

This is only a rough estimate, I didn't put in any losses (the drive train steals up to 20% of the motor power!) or any fuel economy.

tl;dr: Running all this devices will put additional load on the motor and increase fuel consumption, but compared to the power needed to drive the car, this will be hardly noticeable.

Does the alternator always have the same amount of mechanical drag on the motor, or does it vary with charging requirements of the battery?

Varies. Whenever it's an alternator, a hand-wound flashlight or the megawatts-sized generator they have in power plants, the amount of electric energy drawn from the output is taken from the input shaft (actually about 2-10% more, to cover the loses of conversion). When you disconnect every load from an alternator, the amount of mechanical energy drawn from the engine drops to nearly 0 (nearly, because some loses are constant, like those of the driving belt, bearings, etc).

If you go camping and plug a 12 volt cooler, a laptop for watching movies, 5 phones for the whole family, etc into the car's battery, is one consequence of this that the alternator will respond by dragging more on the engine.

Or, would it not have any effect on fuel economy?

It will have effect on fuel economy, but it can be easily hidden. Even load as large as 100W is not very noticeable when compared to even moderate engine that can pump out 40-80kW. 100W taken from the lighter socket that's roughly 100W less at the wheels. When you're driving, your speed will drop slightly. Now 2 things can happen: either you won't notice, so the total fuel economy won't be changed at the cost of slower driving. Or you (or cruise control) will notice, and will press the accelerator harder so the speed will be maintained at the cost of increased fuel consumption. And when you consider that your car AC is another mechanical load on the engine, that consumes power in range of several kW, few hundred watts can easily pass unnoticed.

It's a really simple math: as the energy conservation principle says: energy can't be either created nor destroyed. Both sides must be equal, so EnginePower = DrivingPower + AlternatorPower (+ AirConditioningPower).

Now, could an alternator that always draws same power even exist? Sure, it could. But that energy, if not taken away in form of electricity would have to go somewhere, which usually means wasted as heat. So our hypothetical device would heat up like hell without load and run considerably cooler when loaded to the max. A 1kW alternator doesn't heat up with the power of a 1kW space heater when idling, which shows that it doesn't waste that much power. And when the energy is neither transmitted away (eg. in form of electricity) nor wasted in the form of heat it can only mean that it was never there in the first place.

Not the answer you're looking for? Browse other questions tagged electrical alternator or ask your own question.

5
Does length of jumper cable matter while jumpstarting a motorcycle from car battery as a booster?
2
Which convenience features in a car affects fuel economy?
2
When running a pump off your car battery, does it matter of the car is running or not?