Hyundai Elantra 2010, interior dashboard backlighting lights flickering on and off

I have a 2010 Hyundai Elantra with about 93,600 miles on it. Originally it was my mother's car (she was the only owner) but I got it off of her back in April. She for the most part kept up on the maintenance, but there is an odd issue where the interior dashboard backlighting and radio and console area lights will turn off randomly when driving. If you "flick" the dimmer switch on the left side of the console, it will come back on. None of the other lights have an issue, it's almost like there is a short, or a wire is not grounded properly for the dashboard and console lighting. If the radio is on it remains on, and the car never has an issue starting. It also should be the original battery (about 6 years old) and every other time I get my oil changed I have my mechanic check it out to make sure it is working okay.

The issue is very random but annoying, I have saved up some money and I want to get it taken care of for safety reasons (it makes it hard to drive at night or early morning). Since I am more of a computer nerd and have never worked on a car, I wanted to know what are some logical things to check ? I was looking around and most issues with dimming and flickering lights also talk about other electrical issues like the car not starting or turning off, I don't have those problems.

Also, there is a rare but light "burning stinky smell" from time to time, which I read could be related to an alternator belt or faulty wiring. However, I do need to get my oil changed (I am 1000 miles over) so I was thinking maybe that is the smell I am smelling? Also my mother brought up a good point that I have not needed to use the heater all summer (since it has been hot) and it could just be that I am smelling the heater, it tends to smell the first couple of times you turn it on for the fall / winter. That would explain why the smell is rare since I don't use the heater that often.

What are some things I should have the mechanic check out tomorrow ?

The question was asked almost 2 years ago and I suspect you found your answer. I'll answer this for the rest of the community in the event someone else experiences this.

The dimmer switch is a variable resistor or rheostat, lowering the voltage to dim the lights. There are two types, a coil of resisitive wire with a wiper that contacts at various points, or a strip of resistive metal (carbon is deposited to increase resistance) with a wiper. As you turn the knob, the wiper makes contact with the resistive element and increases or decreases the voltage supplied to the lights. They can become worn over time and have areas where they stop working. Think of an old radio where the turning the volume know might result in static or dead spots.

If accessible, an electrical contact cleaner spray might resolve this, but if you are smelling hot/burning electrical smell, I would suggest replacing the entire unit.

This part is Part Code 94950 in the diagram below 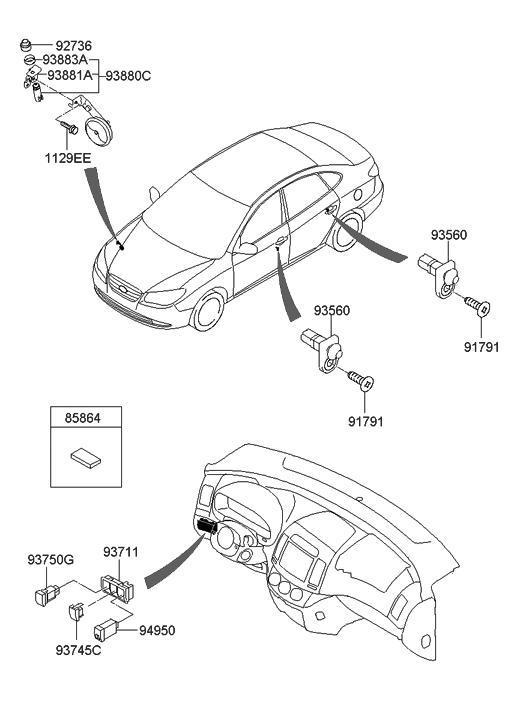 sounds like you have a loose wire going to the dimmer or the dimmer itself is worn out. I am an IT guy it's all wires get under there with a voltmeter and soldering iron and find the loose wire. You can also use a tone generator and probe to trace them. I would start under the dash at the dimmer switch and rattle some wires while looking at the dash lights. If you get them to flicker then start rattling individual wires to see if you can find the bad connection. worse comes to worse you can always wire in a toggle switch where teh dimmer was if it is the dimmer that is bad.

what kind of burning? wire, rubber, oil, something else? If it is electrical then find it fast before it causes a fire.

Not the answer you're looking for? Browse other questions tagged electrical hyundai lights elantra or ask your own question.