I'm going to put my new water pump on my 98 Mazda 626 today and I'm strongly considering reusing the OEM metal gasket instead of the material gasket that came with the new water pump. I'm pretty sure the original water pump has been removed and put back at least once, and it's never leaked. The torque specs from the WSM are 14 - 18 ft-lbs ( maybe the specs would be different for a non-metal gasket? ) and it doesn't say anything about either replacing the gasket or using RTV in the water pump replacement section.

The OEM metal gasket seems in perfect condition and I'm figuring if something isn't broken, don't fix it.

So I went out this morning and put on the water pump with the old metal gasket without any rtv. I couldn't get the surface completely dry, since every time I would start tightening down a bolt ( star pattern, first by hand, then to 10 ft-lb, then to 15 ft-lbs ) a little water would dribble out from inside the engine. I filled the cooling system with water and saw near one specific bolt what seemed to be a teeny tiny dribble ( dried it and saw new droplets coming out ), so I went back around and torqued all the bolts to the spec max, which is 18 ft-lbs, let it sit for a few hours and there doesn't seem to be any further dribble from that area. I'm going to let it sit till tomorrow, but assuming that it's still dry is that OK, or is there a significant chance a leak from here would only show up under operating conditions? I have to remove the timing belt to get to the water pump, so I want to be sure before I put it all back together.

So the metal gasket wasn't in as good condition as I originally thought: 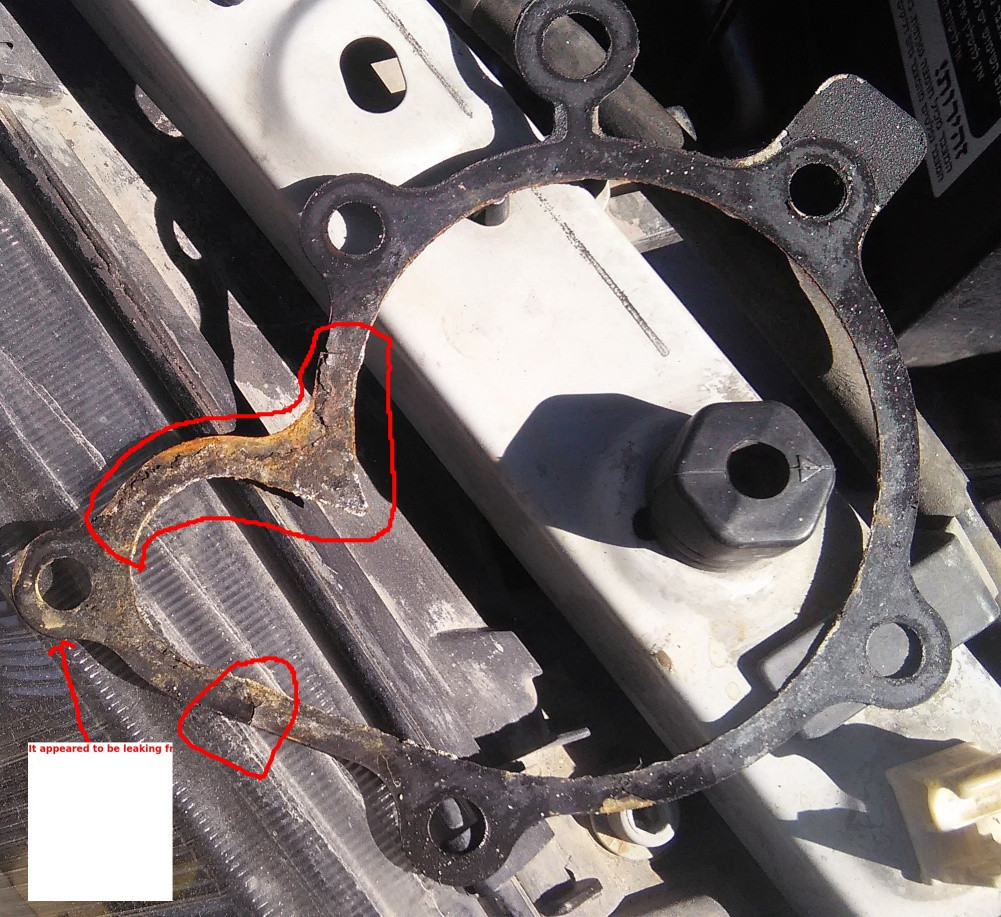 You can see that there is some kind of coating on the metal gasket which seems to have deteriorated in the circled spot, and that's were the tiny leak was coming from.

Even though it was a tiny leak, it was clearly a leak and you can see it here: 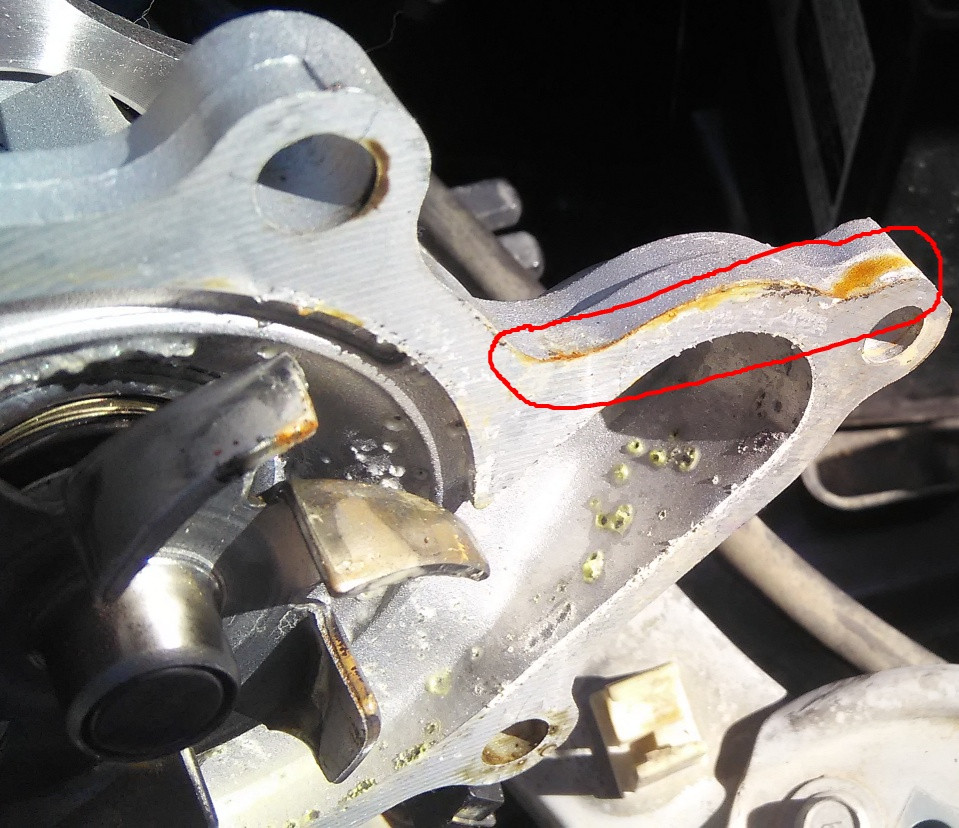 So I put a thin bead of rtv on both sides of the new gasket and installed everything and am waiting for it to cure, then I'll go out and fill it up with water after about 15 minutes to see if it leaks.

I'm sure it probably would have worked like Paulster2 said, if the metal gasket had been in as good a condition as I initially thought.

Metal and malleable material gaskets (like are found in GM intake gaskets), can be reused if there isn't any apparent damage to them. Even some MLS (multi-layered steel) head gaskets can be reused under the same conditions.

That said, it's always a crap shoot reusing gaskets. In the case of metal or malleable, you're in good shape most of the time. Once in a while, the gasket, even while looking completely good, will still leak. It's one of those things you'll have to put up with. Therefore it's a decision you'll have to make and live with it. If the water pump is in a bad spot and hard to get to, you may not want to chance it. If it's rather easy to get to, I wouldn't worry about it and reuse the gasket.

EDIT (WRT your edit): You may have wet bolt holes, meaning there is coolant behind the bolt. If so, you may want to put some Permatex on each bolt so it will seal as you insert them. If you aren't seeing any dribbles now, though, you may just not want to mess with success and leave it alone.

PS: I would not use any Permatex on the metal gasket. They really aren't designed to have sealant applied to them.

Paulster is right but if you are going to use the old gasket I suggest putting some RTV on both sides to make sure it seals. But if your going to buy RTV you mind as well get the gasket since it can't cost much more than RTV. Unless you need to drive it tomorrow and can't wait for the new gasket.

Not the answer you're looking for? Browse other questions tagged water-pump gasket or ask your own question.

11
Why would there be transmission fluid in the water overflow reservoir?
3
Water pump lifetime
6
Installing a new water pump - what to do about the gasket?
4
VW Mk4 TDI (ALH) – Suggestions for Removing Stuck Water Pump
6
How can you tell if a water pump or water pump gasket is bad?
6
Why would a brand new water pump make noise?
3
Evaluating a Head Gasket Replacement
1
Will an Aftermarket Water Pump (Came with Paper Gasket) Leak with Metal OEM Gasket?
2
Do I need a sealant for a metal gasket on a water pump