Do any new cars come with cast iron engine blocks?

I am thinking that all manufacturers have switched to aluminum as the material of choice for engine blocks. I could not find any sources to confirm this.

Do any new cars come with steel engine blocks?

I believe you are probably asking if cast iron is still being used in cylinder blocks, because to my knowledge, steel has never been used in mass production towards that end.

With that said, cast iron is still being used in the manufacturing of engine blocks, but not nearly as much as it used to. Take for instance Ford. They are using cast iron in their twin-turbo V6 engines which they debuted about two years ago. The block for this application is not what you'd consider "typical". It's actually a hybrid block consisting of the cylinders and main bearing sections being formed out of what is called compact graphite iron (CGI). It's also called vermicular graphite iron.

Ford's block is only about 1/2 CGI, the other half being made out of aluminum. While the CGI provides toughness where it's needed, the aluminum provides strength and stability at a much lower weight penalty. 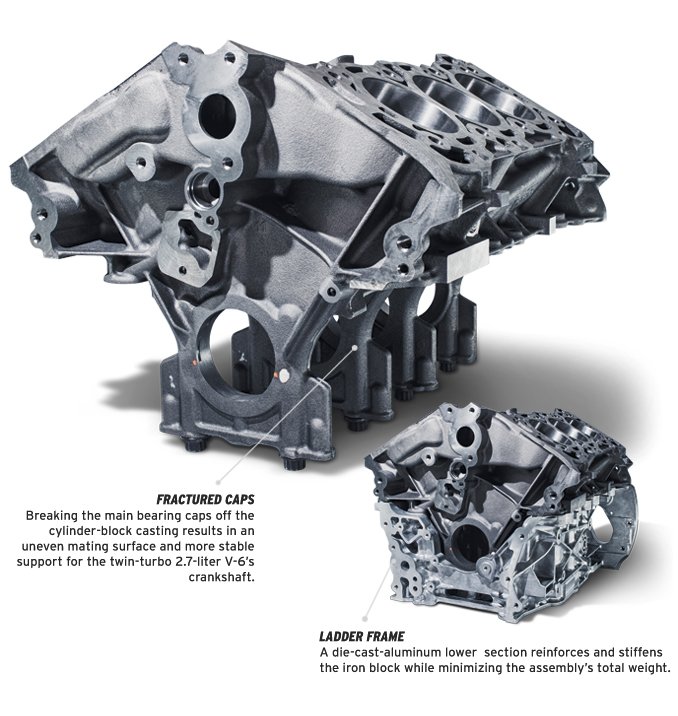 Manufacturers are also using cast iron block for use in diesel applications. This is because the diesel needs a more robust foundation than does your typical gasoline/petrol application. You'd be hard pressed to find an aluminum block in a semi-truck. They would just not stand up to the amount of abuse which is put on them, nor would they last as long as the cast iron blocks do. While aluminum may provide a weight savings, cast iron provides the longevity needed in this application.

Up until 2013 when GM stopped placing the LSx series engines in vehicles, they utilized an iron block for their pickup trucks. It was the same block design as the aluminum variants, but was more heavy duty for their intended purposes. With the advent of the Gen V small block, GM is only using aluminum casting for their LT1 V8 motors.

You may also want to read this answer which talks about aluminum v. cast iron in automotive manufacture.

Cast iron engine blocks are mostly used in luxury diesel turbo/super- charged vehicles to increase reliability. It is twice more expensive to manufacture engines with cast iron than aluminum. The most recent American cast iron engine would be from Ford Fiesta/focus/Ecosport/Puma 1.0l. In my opinion the most interesting engine block would be made from the zirconium alloy.

Not the answer you're looking for? Browse other questions tagged engine aluminum block or ask your own question.

22
Aluminium engine vs Cast Iron engine
4
What material are combustion chambers made out of?
5
When to bore a block during a rebuild?
1
Cast iron vs aluminium engine blocks
2
What is the likelihood of a cast iron block needing resurfacing along with its aluminium head?
2
Does the gearbox need to come out for the engine to mate up with it?
3
Chysler Town & Country Cam Shaft and New Engine
1
Effect of ethanol added petrol on vintage cast iron engine bikes
0
How are new cars (with HO2Ss) affected by cold starts?