Do 3 and 5 cylinder engines have uneven power delivery?

I know that they are out of production and only a few of them were made.

You are thinking too linearly. A V8 engine has two connecting rods attached at each crank journal with a crank spacing of 90° between each crank journal. The I5 (like the GM LLR) has a single connecting rod per crank journal and has them separated evenly at 72°. It fires once every 144° of crankshaft rotation. It fires the cylinder a little farther apart, but it's still even between each ignition cycle. In some ways it's even a bit smoother than a V8 would be because it has an inherent power cycle overlap of 36° which you don't get in a V8, V6, or I4 engine.

Here is an drawing of how the crankshaft would look from the end position: 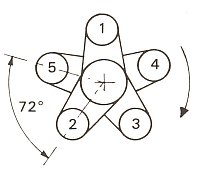 Here is a great animated image of the 5-cyl in motion. (NOTE: The image was a tad to big and Imgur wouldn't accept it.)

This Engineering Explained Video does a great job of explaining the 5-cyl engine.

The I3 engine (and there are plenty of them which have been made) has the cylinder separation at 120° and fires every 240°. This is a larger separation and would have more vibration. The power cycles are also spaced further apart, pretty much like a V6 engine, at 120° between each firing. With this, there is a dead space between each where no power stroke is occurring.

Here's a great animation of a 3-cyl engine in operation:

This Engineering Explained Video does a great job of explaining the 3-cyl engine.

37
Changing Firing Order in a 4 Cylinder Car
10
Scatter Camshafts - What are they and why do I want one?
6
Can a modified or non-fixed firing order yield a racing advantage?
4
I3 engine balance/power delivery
5
Diesel engine timing?
5
How does compression release work?
3
How are rotary engines balanced?
1
How do paired injectors work?
2
Motor oil requirements on exhaust system
2
Atkinson Cycle: Does the efficiency of a high-compression engine come from compression ratio, expansion ratio, or both?