Do primary and secondary coil resistances correspond to number of windings?

An inductive ignition coil is basically a step up transformer, in which the ratio of windings between the primary coil and secondary coil determines how much the primary voltage is multiplied by.

I am wondering if the ratio of the primary to secondary coil resistances, will give you the same ratio as that number of windings?

I have a feeling this might be possible, as I stumbled across some interesting info, but don't have the patience to figure it out myself at the moment:

I bet there's something similar for iron core coils.

IMHO the only reliable way of telling the winding relation would be to feed an low voltage alternating current with known amplitude into the primary winding and measure the amplitude of the secondary. Attention: You could easily generate a potentially fatal tension, please do this only if you are experienced with high tension and can apply the necessary safety precautions.

Just some background information on the idea of measuring of the resistance:

Assuming you will use a digital multimeter it is quite possible that you will have problems measuring the resistance precisely. The reason is that the multimeter tries to adjust the tension dynamically thereby interfering with the inductance. The result will be the multimeter showing wildly varying values.

If you want to measure the resistance accurately you better use a fixed tension source with an protective resistance. The result will be a simple voltage divider, albeit since it is not guaranteed that both primary and secondary winding have the same wire the difference in specific resistance of the wire would permit no statement about the number of windings. You can calculate the secondary resistance of a voltage divider by applying the following formula:

You could avoid the shock risk mentioned by @Myself, perhaps at the loss of some precision in the measurement, by applying the known source to the secondary winding. That way you're using the coil as a step-down transformer, instead of a step-up transformer.

There were already good answers, I'd like to add some points and also write something about the inductance.

Here is a sketch of a typical coil: 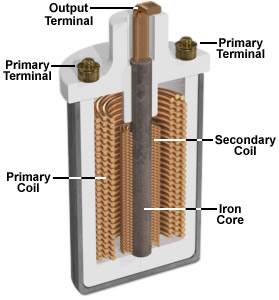 There are in principle two reasons why there is no correlation between resistances and windings. Therefore, keep in mind that resistance depends on length and diameter (gauge) of a wire.

First, as already said by others, if different wires are used for both windings and the gauge is unknown, the length of the wires can not be calculated from the resistances.

Second, the length of a single loop of a winding depends on the diameter of the loop. In the sketch, the primary winding is put around the secondary, giving the entire primary winding a larger diameter. And each winding consists of several layers, the outer having a larger diameter than the inner. So, even if the length of wires is known, the number of windings can not be determined

@resident_heretic wrote about autotransformers. They use the same gauge for both windings, but since the secondary part has much more turns, it is possible that the secondary part is thicker and has a higher effective diameter.
And there may be ignition coils of this type out there, but they are by far not the only type. I guess the classic two-wire type is still (more) common.

Now, in your edit, you ask about inductance, which you would have to measure first. I guess devices which can measure the huge inductivity of asecondary coil are rare. However:

In reality, it is much more complicated, since the shape of every component plays a role, the permeability of inner layers play a role for the outer layers of the same winding and so on.

The inductivity depends on much more unknown parameters than the resistance, rendering the possibility to calculate winding ratio impossible.

The only reliable way is to put a small AC voltage on the primary and measure the voltage secondary - though that can be difficult and dangerous.

Since they share the winding using a very sensitive ohmmeter (10M-Ohm/Volt or better) you could determine the differences in coil resistance thereby determining the step up ratio by measuring each coil from the common ground.

Transformers are very efficient devices 97% of the energy sent into the primary winding is induced into the secondary winding.

Not the answer you're looking for? Browse other questions tagged electrical ignition-coil or ask your own question.

4
Coil On Plug, Testing The Primary Coil
4
How does this ignition coil work? Why are there two wires, and where should they be connected?
2
Testing a motorcycle ignition coil and spark plug
1
Suzuki Intruder VL1500 Ignition Coil Difference in Front and Rear