About three weeks ago while travelling 10-15 mph I pulled off the side of a dirt road to park and it turns out there was a row of a few railroad ties laying in the grass there. The ties ran just inside the right tires, with most of the weight of the car on them, and my car stopped when the front side of the muffler hit the leading edge of the tie. I backed off of them, took a cursory glance underneath, wondered how my muffler was still attached, admired the exhaust pipes' fancy new wood veneer for a moment, then decided to pretend that didn't happen.

The ties hit the exhaust system pretty hard. Here is a picture, this is somebody else's car with an aftermarket exhaust but it at least shows the routing (railroad tie path is orange arrow): 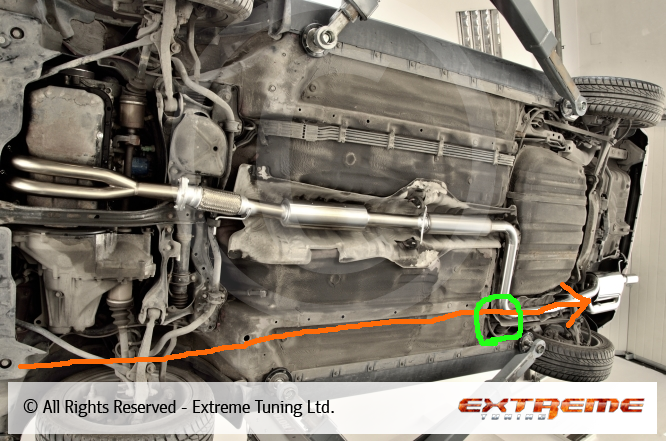 (image source, also thanks @Myself for finding that).

The car was squeaking a lot after that which turned out to be a bent heat shield rubbing against the exhaust pipe (circled in green above), an easy fix, I corrected it later that day. I didn't notice any other damage on a closer visual inspection. The cat is on the centerline, I didn't hit it directly, but I'm sure I stressed the whole system hitting the pipe in the back.

Now, starting exactly the same day, I am seeing random misfires on cylinders 1 and/or 3 (it's an inline 4) one to three times daily, without fail. That's been going on for three weeks now without getting better or worse. I have yet to see even numbered misfires. The codes are P0301 and P0303 (misfires), P0300 (which is just a consequence of multiple P030x codes), and P1399 (which for Hondas is just another misfire code). I'm not noticing any power loss or other engine issues. I have not yet been able to determine any specific conditions under which the misfires happen (and I have tried).

So here's what I know:

So my question is: Could these be connected? Is there anything that could be damaged in the exhaust that would cause a misfire? Damaged cat / o2 sensors / connections / muffler? I didn't notice any loose brackets or visibly broken pipes or connections around the muffler or any other components. Something in the engine? Could these two things be connected?

What about, is it perhaps possible that something beyond my understanding happened that is causing it to falsely detect / report misfires?

The next step I will be taking is to continue to view these as independent events and change out the fuel injectors. That's the only thing I can think of but I'm wondering if there's some obvious connection to the exhaust.

Update, about a month or two after the above post:

Shortly after this post, I cleaned and reseated the fuel injector connectors. I also ran some injector cleaner through the fuel system. I cleaned the intake manifold and throttle just for fun. I visually inspected the O2 sensors amd cat but all the welds and sensors and wiring looked physically fine. The problem stopped for about a week then returned (a month or two ago). It continues in the same pattern: Odd cylinders only, every day or two, no other noticeable symptoms or engine weirdness.

If the muffler hitting the railroad tie stopped the car, you very well may have snagged something loose. Visually inspect your exhaust and pay special attention to the O2 sensors, they may have been jarred loose.

I wouldn't replace the fuel injectors just yet, but do visually inspect the engine bay, and for sure reseat the fuel injectors' connectors. I doubt the exhaust could have moved the engine block, but have a look and see if anything could have been pinched by the exhaust or engine being pulled backwards, look for something that has a tight fit as it is.

So, I don't have an exact answer to the actual problem, but I will say and an exhaust leak would be an unlikely culprit for misfire. Also, if impact damage had enough force to do that it'd probably be pretty visible.

That said, it's most likely that something else is the culprit which could (mostly) unrelated.

We know the exhaust system is fine.

We know the O2 sensor is ok.

We know that doing the work you did resulted in a temporary fix.

What We Can Extrapolate

It is doubtful that the exhaust or an exhaust leak is the fault. If this was the case, doing the things you did would have had no effect. That and I think it would take some serious damage to cause a misfire.

There is likely a fault coming from your injectors or O2 sensor. Most of what you did targeted these parts. Cleaning and reseating everything could help a partially faulty component work correctly.

It is possible that one of the connectors is partly damaged. It is entirely that a sharp jar could damage a conductor, pin or clip in a connector or the leads for you O2 sensor. I this happened the vibrations of driving could cause intermittent codes to be thrown, however I don't know that it would actually cause misfire without being a somewhat consistent problem.

I'll keep an eye on this thread and if anything more certain comes to light I'll update my answer.

3
Could taking coolant through the intake filter realistically cause permanent inability to start?

5
Ibiza Mk2 MOT emissions test failure
1
2000 Toyota Celica GTS aftermarket exhaust system
4
Complete exhaust system replacement necessary?
6
03 Honda Accord lx 2.4 vtech misfires and stalls when cold
13
How does condensed water get sent out of an exhaust system?
7
The Mystery of the Misfiring MINI
1
Do I have a Bad Catalytic Converter?
3
Trying to Understand Post Cat O2 Behaviour During a Misfire
3
Diagnosing silent misfires