Hit a curb; chewed up rim and took a chunk out of tire. Will they need replacement? 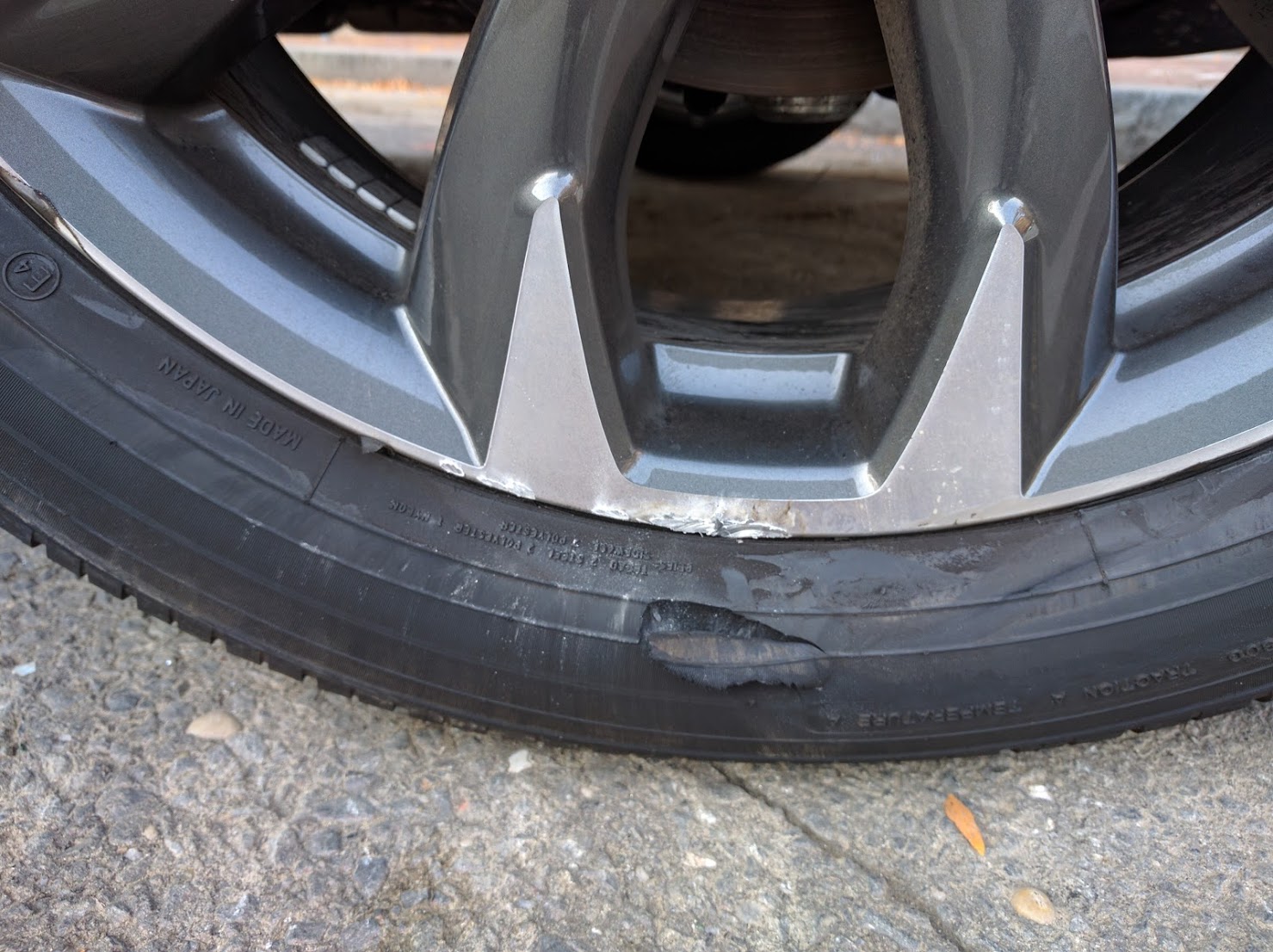 Forced into a curb this morning while going about 35 mph...Just wondering what I'll be in for when I take it in later this afternoon. No air coming out as far as I can tell... Maybe 1/4-1/2 inch deep, and about 2 inches across... Any thoughts would be appreciated!

Secondary question... I have only about 6800 miles on my car, and have already replaced one tire due to a bad flat (back left)...Given that this is an AWD vehicle... do we think I'll be able to get away with only replacing this one affected tire?

tl;dr: Sadly, that tire appears to be a goner. The wheel is likely fine, though. You might be able to replace just the one tire.

If you look at the divot cut out of the side of the tire, you'll see a distinct color and texture difference in that center portion. It appears that you've removed all the surface rubber in that area. All of the insulating material is gone, leaving the structural component of the tire that much more exposed. You have much less protection against a total failure in that area. I suspect that you're already leaking air across that whole patch.

The wheel, however, is merely scuffed. It should be fine. My recommendation is that you replace the tire and leave the wheel alone.

With respect to your secondary question, you might be fine replacing just the one. It sounds like you have fairly minimal miles on the tires so it's possible that the outer circumference of the other tires won't have changed much. The main issue on an AWD car is the stress that difference circumferences put on the differentials. In my car, for example, if I get the pressures in the tires off, I'll hear noises in the transmission during engine braking.

It is also possible that your tire vendor will be able to shave the new tire down to match the existing ones on the car. You'll have to discuss that with the vendor.

Based on your picture I would replace the tire without question. It's not worth the risk. If the sidewall fails while driving it could result in you losing control of the vehicle.

Replace the tire by all means. If you drive around with a tire damaged that badly, you risk having it explode while you're driving and losing total control of the vehicle, and possibly being stranded on the side of the road while you wait for towing.

The risk is great enough that it is definitely worth replacing.

Sorry to have to say it, but I think both the tire and rim will need to be replaced. The tire appears to be leaking already, and if it isn't now, then it will in the near future.

The rim could possibly be saved, but it doesn't look so good. The rim is damaged on the lip where it meets the tire. If the rim was reused, it may have a slow leak. Try driving it around for a few days to see if there is a leak. Be sure to check the tire pressure on a regular basis. It should be checked every time you drive anywhere for at least a couple of days. If the pressure stays consistent, then most likely it will hold.

The tire, yes, I would definitely replace it. You don't want that blowing out at highway speeds. And like others have said, have the shop check the diameters of the existing tires--the AWD system could act strangely if different sized tires are used. If they can shave the new tire down to match, that would be ideal.

As for the wheel, just from the photo it appears to be a surface scuff--I have had worse chewed up rims (from curb rash) on aluminum wheels that held air just fine. Remember that the sealing surface for the tire is a larger section behind the front surface of the rim, not just that small outer lip. If the rim is slightly bent, it can be straightened by any good wheel shop with a press and proper tools. If that chewed up edge is sharp, the shop can smooth that out before mounting a new tire. A good shop will inspect the wheel when you get new tires and will not mount a new tire if the wheel needs repair or replacement.

If the appearance bothers you, then just replace the wheel, and sell the used one to recoup some of the cost. If the wheel is expensive and your comprehensive insurance has a low enough deductible, they might cover some of the cost from this damage.

Considering the wear (hard to assess from the picture, but still), you'll need to replace both tires on the axe. No good dealer will mount you a new tire next to a worn out one.

Driving with significant wear difference between right and left tire will result in your car deriving from straight line when you release the steering wheel.

Replace the wheel and the tire.

Not the answer you're looking for? Browse other questions tagged tires mazda awd or ask your own question.

18
Can this tire sidewall damage be repaired or should I replace the tire?
1
Hit a curb, took a chunk out of the tire. Replacement?
1
Hit curb and chunk out of tyre. OK to drive on?
0
Tire and Rim Damage From Scraping Curb
1
Off road tires for a Subaru CrossTrek.2018 what needs to be done to get a good 75 height tire?
1
How far should you drive on a donut in an all wheel drive car?