What are the differences between a dual mass flywheel and a standard flywheel?

I understand the basics of a flywheel and why you want one on your vehicle but diving any deeper than that is not within my knowledge base.

Can someone please illiterate the delta between the two flywheel types?

Are there other types of flywheels that deserve an honorable mention?

Are there benefits to having a dual mass flywheel?

Please post a diagram or other visual learning aid to assist in my enlightenment.

A dual mass flywheel (or DMF) is a flywheel that is split into two halves (hence the name...), with a spring or springs between them to dampen out sudden changes in torque and rotation speed, and thus smoothen out vibrations in the drivetrain - making for a smoother drive, particularly in diesel engined vehicles, and the newer two and three cylinder engines that aren't as smooth as a properly balanced larger engine.

As usual, Wikipedia provides a nice diagram (red: crankshaft side, blue:transmission side): 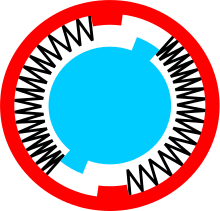 The key disadvantage of them is that they wear out, and are very expensive to change - often meaning they get replaced with conventional solid flywheels by owners of older vehicles who are less concerned about refinement.

The dual mass flywheel is typically misunderstood by a number of people. It's function is not to provide a smooth ride but is actually designed to protect the gearbox from destruction.

My car, a run of the mill Volkswagen 1.9 TDI from twelve years ago, develops a staggering 250ftlb of torque. If this was fitted with a solid flywheel, this is more than enough torque to, if I'm harsh with the throttle and clutch, destroy the gearbox within 20,000 miles.

Because the dual mass flywheel is relatively expensive when compared with solid flywheels that will fit the car, for example from the early VR6 engines on the previous models, I am aware of a number of people within the owners clubs who have opted to go this route when replacing their dual mass flywheel. Typically following this a trashed gearbox follows some months later.

So, the dual mass flywheel is effectively a consumable / sacrificial part designed to prevent the considerable expense of a gearbox rebuild.

Adding to what Nick and Steve have said. Consider the millisecond-by-millisecond operation, and that the rated torque is an average over the engine cycle.

In fact the engine is producing large spikes of torque during each cylinder's combustion event. Rather than transferring this into the gearbox the DMF averages the torque output, reducing the peak and spreading it over a larger range of crank position.

This is of course, good news for drivetrain components.

This chart nicely illustrates my point:

DMF is basically torsional vibration isolator. It does not do anything with damping. It is not damping element. DMF isolates vibrations coming from engine and preventing to reach to gearbox. You may want to look this thesis

Not the answer you're looking for? Browse other questions tagged engine engine-theory flywheel dual-mass-flywheel or ask your own question.

37
What are the benefits of a lightweight flywheel and why aren't they lightweight already?

18
What is the difference between a 180° V4 and a true boxer motor?
20
What does a flywheel do and what is it connected to?
10
What is the efficiency delta between rotary and modern four-stroke engines
4
Differences between Homogenous and Stratified-Charge operation
5
What is the difference between "multi port" and "combined port" fuel injection?
26
What are the Advantages & Disadvantages of a Boxer engine?
37
What are the benefits of a lightweight flywheel and why aren't they lightweight already?
1
What are the technical differences between a 2SZFE engine manuactured before 2005 and a 2SZFE manufactured after 2004?
2
What causes imbalance in vapor seen between dual exhaust tail pipes?
1
Differences between drive by wire and drive by cable