My riding lawn mower has a Briggs & Stratton 18.5HP Intek motor (Model number: 31P777-0602-B2). The other day it began bellowing dark smoke, then sputtered and died. It would not start following.

At the time, it smelled strongly of gas, and there appeared to be gas in the engine oil.

I thought maybe the float was gunked up and it was letting too much gas through, so I pulled the carb, cleaned it up (did not appear to be gunked up at all), changed the oil and put it back together. (Note: this carb does not have a main jet adjustment, only idle speed and idle mix)

The engine then ran, but very poorly (especially at full throttle). It stumbled and appeared to be backfiring out the intake. So I pulled the head found the intake push rod was bent (exhaust rod looks fine). I didn't think the head gasket looked obviously blown, but I'm not really sure what to look for there.

I can replace the rod and check clearances, but I don't want to put a new one in and have it fail immediately. What could have caused the rod to bend the first time? What would be my next step to try and diagnose the original failure?

The intake valve sticks slightly. The sticking can be overcome with a small amount of force. For example, I can hold the head and the intake valve will stay compared to the exhaust valve which slides out on its own. The intake takes a few light taps to slide out. Is a slight sticking enough to bind during operation?

I've read that the valve guides on these engines can move which can lead to bent rods, but I'm not really sure what they're supposed to look like before they've moved. Do these look OK? 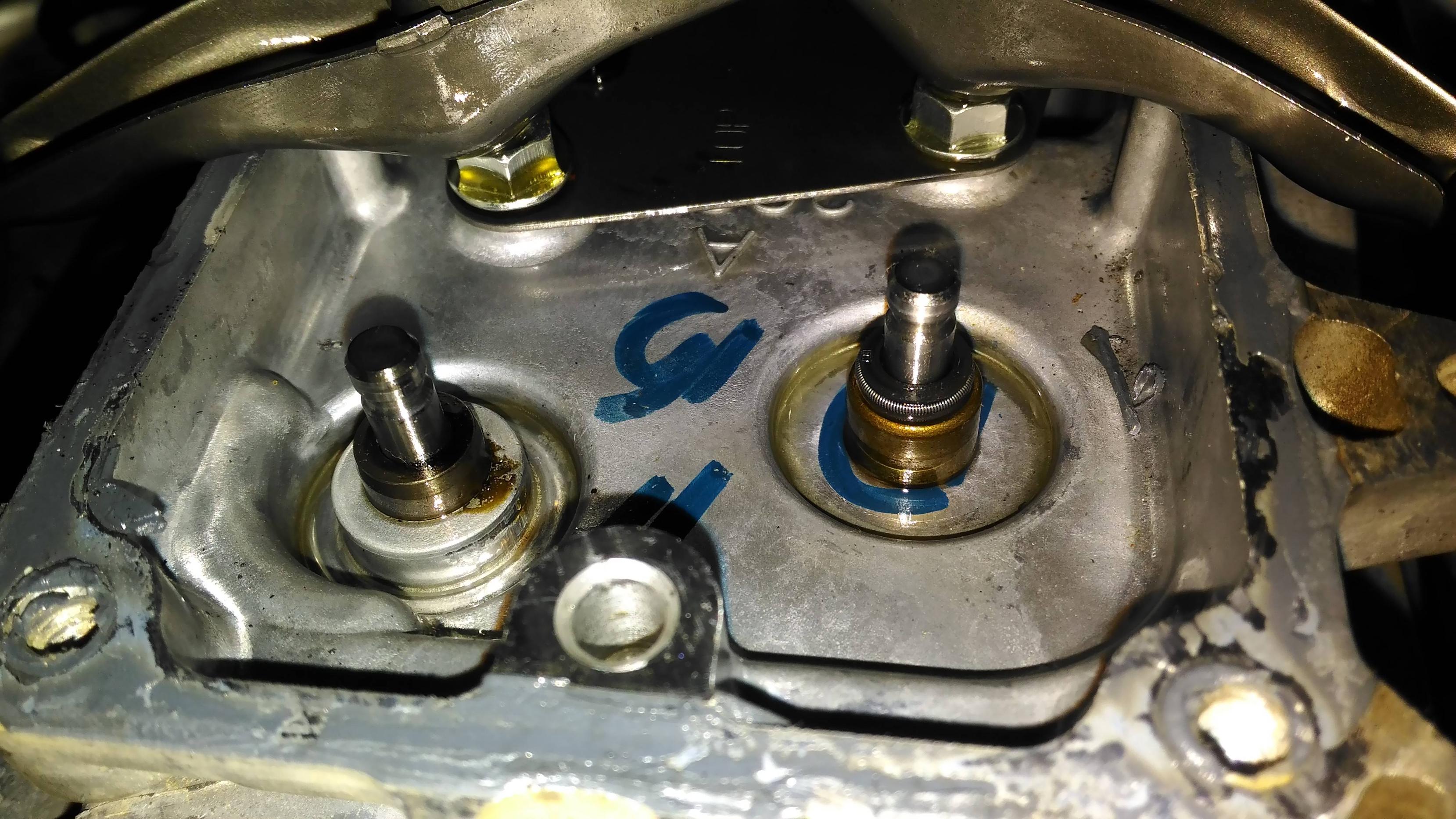 If the intake valves push rod is bent the valve has come into contact with the piston and is very likely bent.

If a valve has been adjusted with an incorrect clearance (too much clearance) or opened up over time due to a loose lock nut.. It can lead to piston/valve contact which will bend the valve. It is caused by the rocker arms ball jumping out of the push rods cup, so instead of the little ball sitting in the push rods cup, it jumps out and pushes on the edge of that cup, which effectively opens the valve way too much forcing it to hit the piston, the weakest point (the push rod) then has to give way.. thus bending it.

The valve is probably only sticking now as its bent.. You will need to fit a new valve and see how it moves in the guide. Put a skim of motor oil on the new valves stem and fit it into the guide, If it slides perfectly smoothly with only a little resistance the guide is likely ok. If however the new valve is loose or sticking in the guide it will need replacing too.

Even if the valve guide had moved a bit, the valve can still only open and close the same amount.

Is it possible that the rod came loose before it bent and lodged someplace and caused the engine to bend it after it came loose. Am thinking that maybe the adjustment of the rockers was not correct causing the rod to come loose

The cause of the bent push rod is the valve guide thimble is only press fitted, and easily loosens when the engine reaches a certain temp. The thimble then pushes outward, restricting the movement of the valve spring, eventually causing the push rod to bend. This is a design flaw in current B&S engines. I have no idea how long this flaw has been around. but it's quite a problem. They say it's because the engine overheats, due to restricted air flow, or inadequate oil maintenance, or ? But those who've encountered the problem often cite no problems with restricted air flow and always made sure the oil was changed frequently and kept topped off. In my opinion, this design flaw might be solved by removing the valve guide thimble, machining grooves in both ends, countersinking the head on both ends, then reinstalling the thimble with C clips on both ends. This would prevent any future movement of the guide thimble. I've yet to put this to the test, but something along this line needs to be done because this is a real problem, and new heads are currently at least $150. IF someone can solve this issue, I bet there'd be quite a market for rebuilding the heads.

Another possibility is that the valve overheated and then started to seize. This could then cause the bent pushrod without any damage to the piston.

can you see any damage to the piston top or the valve?

You probably need to remove the valve and check for wear on the valve stem, or a possible bend as mentioned in the other answer. Also look at the valve seat, to see if there is any evidence that the valve was not closing properly.

These engines are known for what I call "Bent push rod syndrome". The two most common causes of this failure are;

In my case, valve guide pushed upward into valve spring after getting hot. Dead chipmunk in engine makes for poor airflow. Valve spring top now hits the valve guide, bending the pushrod. Remove spring and push guide back into head. Re-peen. Make sure valve moves freely in guide and is not bent or sticking.

In my opinion. How about just a worn valve spring allowing valve float? The springs are barely sufficient brand new. The high oil and engine operating temps of a air cooled engine. Valves sticking would most certainly leave impact marks on the Piston. Also valve guides pinching the valve stem causing damage that will not be hard to see