According to the Evoscan website the pinout for the 3 pin dlc is ISO 9141 K-Line, B+ and ground from left to right.

So I hooked up the K-Line to pin 7 on my ElmScan5, with power going to 16 and ground to 4. I verified I had the pins correct using a multimeter.

So I figured that the car is probably OBD2B, so I tried the open source ScanTool.net software developed by the makers of the ElmScan5 but it wasn't able to communicate with the ECU.

So I'm wondering if anyone might have any suggestions of software that will work with my current scan tool? I ran into a similar problem with my Mazda 323, and 626, which used either J1850 PMW or K-Line. I could use my standard OBD2 adapter, but needed special software like ForScan to understand the software protocol they were using; regular OBD2 software couldn't communicate with them.

Great! Then I looked for the DLC connector, but of course only found the 16 pin OBD2 since this is a US WSM. I'm assuming however that they're using the same PCM all over.

What surprised me was this: 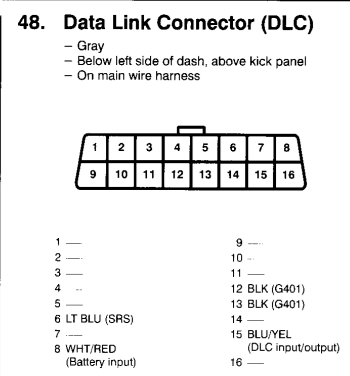 What in the heck is going on here?

This is a really old question, but I was facing the same issue with my 1997 Honda CR-V (which is very similar, and the same connector pinout) when trying to determine if it was compatible with a specific adapter, and I think I figured it out. I have not yet tested this, as I don't have a adapter, but when I take my car to an auto-parts store to get the diagnostics codes read they are able to use their tool just fine, so I think this might be accurate.

Honda uses a different pin numbering than a lot of different people. They swapped the numbering of the rows. So pin 1 should be pin 9, pin 9 Should be pin 1, pin 2 is pin 10, and so on. Using this swap, I converted the diagram in the original question. 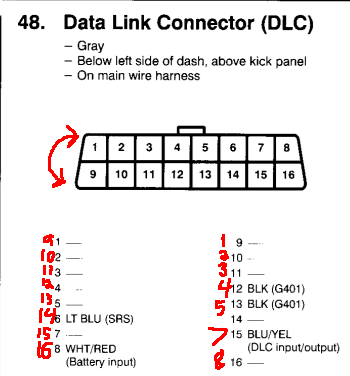 Using the Wikipedia page on OBD-II we now have see that the connector has the the Pin 7 K-Line Connector. Seems that Honda calls the K-Line the DLC. Additionally, the GND pins (4 and 5) are labeled as G401 (possible the bus number), the 12V in connetion (16), and half of the CAN Bus (14), which is labelled SRS, so it might be related to the airbag system instead of being a CAN bus.

Not the answer you're looking for? Browse other questions tagged honda civic obd or ask your own question.

5
What is Honda HDS HIM?

13
What is the life expectancy of a Honda Civic Hybrid Continuously Variable Transmission?
3
What is Honda Coolant?
7
Honda Civic Clicks but won't Crank
4
Honda Civic 2000 DX, Check Engine Light Becomes On but Does Not Give OBD Code
6
Using a thicker head gasket when the cylinder head resurface limit is reached
5
MIL comes on intermittently with Knock Sensor code
4
Honda Civic won't start after sitting in the sun, but fine if parked in the shade
2
Weird OBD2 error on newer Honda models