How to remove oil-pan when only sealant is used

I'm convinced my car has been built by 4-year-olds, because there's not enough space at several spots for the larger hands of any older person. And whoever wrote the service manual on several tasks has forgotten that they also built the car around the motor...

Now, it seems I have a leakage in the sealant of the oil pan, and I wanted to renew the sealant. Since my car doesn't have a gasket, just sealant, the oil pan doesn't come off when you just remove the bolts. I would pull a blade through the sealant, which already is hard to impossible, since the gap is really thin. But the gap mostly isn't accessible. Flywheel, the axles and the exhaust already make it hard to remove the bolt, but there's absolutely no space for a knife or similar.

So, how can the oil pan be removed?

I fear brute-force could warp the pan, so it can't be re-used. May be a torch?

Edit: The car is a Kia Picanto '04 with 1086ccm petrol engine (Epsilon iRDE). The same is used in Hyundai Getz and an improved one in the newer Picanto and Hyundai i10. The motor block is cast iron, the pan is iron, and the sealant is this silicone stuff. Lifting the motor a little isn't enough, one side is next to the flywheel, and a cover of the flywheel has to be removed to be able to remove the bolts of the pan. Parts of the exhaust could be removed, but the axes... please not!!!

There exists a special product "dirko" from the German company Elring. According to the manufacturer it is able to seal without disassembling. Perhaps not the perfect solution, however I guess it would be worth a try.

Use some plastic levers to gently pry out the oil-pan. Since the levers are made of plastic they are unlikely to damage the mating surface. 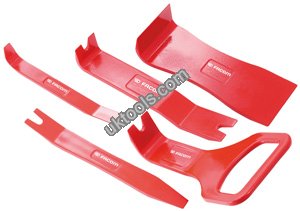 Not the answer you're looking for? Browse other questions tagged oil-pan or ask your own question.