Are these signs of a bad body shop paint job?

A piece of debris gouged my hood in a windstorm. I went through insurance and had the repair done at their recommended shop, which I suspect was a mistake.

The car is red metallic, and I can see the color fade because the repainted parts looks like they have too much metallic flakes in it compared to the rest of the car. As a result, the edges of the hood (where they supposedly faded the colors) almost have a blue tint between the hood and the fenders. Also, the clear-coat on the center of the hood looks mottled and has an oily reflection, whereas the rest of the car has a mirror-like reflection.

Do these issues sound like a lazy body shop job, or is there something inherent about metallic colors that make this sort of repair more difficult and this is the best I can expect? Is it normal for clear coat to have an oily appearance? What's considered reasonable and standard with body work like this? I'm inclined to ask them to re-do the repair.

Edit: an image of the issue(s). Except for the circles, this photo is untouched and straight from my iPhone: 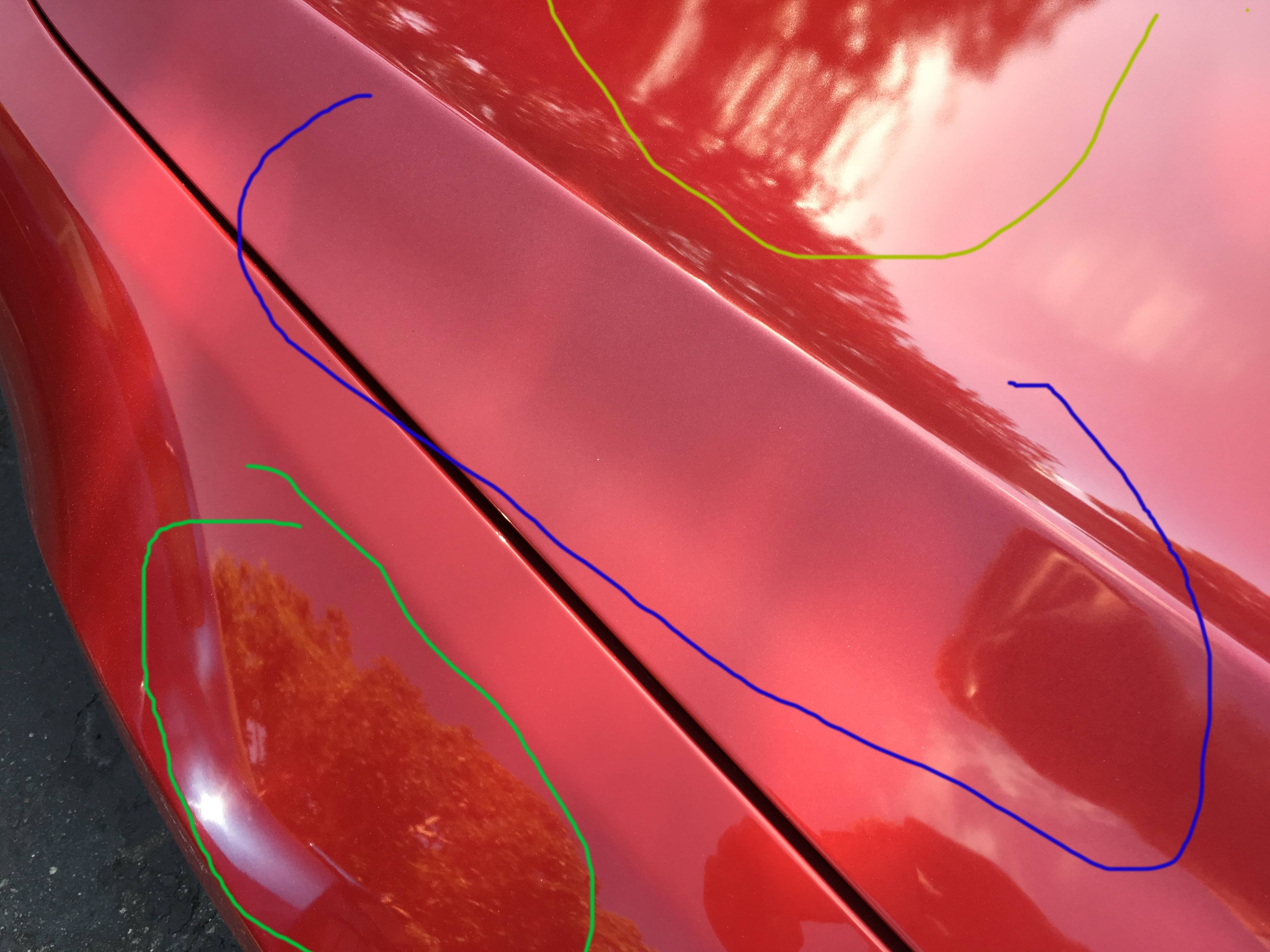 So I ended up asking my insurance company to honor their guarantee and re-do the repair at another body shop because I didn't really trust their first shop anymore.

I picked up the car today and it looks great. I'm SO glad I had the work re-done. Talking to the guy who did the repair, the first shop did indeed do a bad job. He said hood was still dented and the dent was obvious after sanding off the poor clear coat job. They knocked out the dent, repainted, blended, new clear-coat, all to my satisfaction. Should I post "after" photos? It's quite striking how much better it looks now. Thanks for the answers!

If the repair work looks shoddy, take it back to them and get it fixed. There are two very important reasons why they will get it fixed to your satisfaction:

As anecdotal evidence for what I'm saying, I had a car where I rear ended another car and smooshed in the front. I took my car to the body shop which the insurance company gave me to have it worked on. I went back to the shop a week later after I was told it was ready. Upon inspection, I checked the condition of the repair only to find there was some HUGE issues with it. Things like the new front bumper was about ready to fall off, the hood wasn't fixed right, paint wasn't done very well, etc. When I asked the repairman about it, he was going to just tweak on a couple of things and say, good to go! I didn't like it and called the insurance company. They told me, "If it isn't right, don't accept the car and tell them to fix it right." I took that to heart. I pulled the service manager (or shop foreman or whatever he was called) out and showed him the issues. It took another week, but when I got the car back the next time, it was right. Insurance companies want to get the service which they are paying for and so should you.

5
How can I tell which body shop is better? Replacing or repairing parts with VIN numbers
7
Paint is cracking and showing lines, like dried mud
9
Why did my clear coat turn out matte instead of glossy, and how can I fix it?
2
Will the dealer removing some minor paint marks/drips on the side of a car hurt?
1
Bit of a disaster with a paint job
0
Do I need to sand old clear coat to apply primer for new paint?
2
Can i save matte/foggy clear coat?
1
Removing Running/Melting Substance From Car