any tips either way 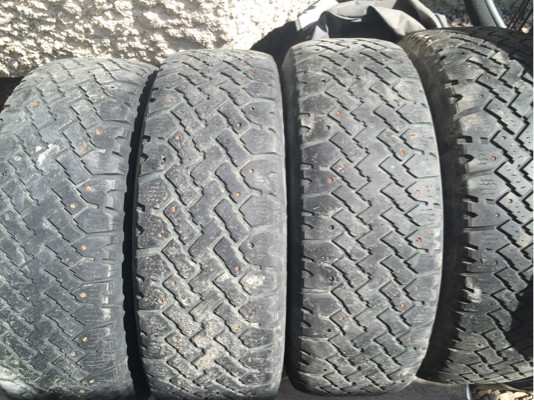 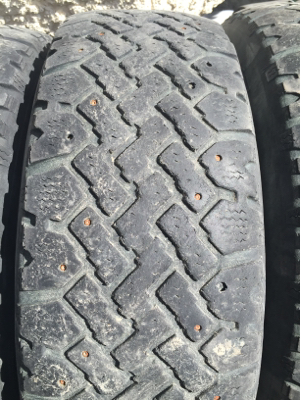 The original tungsten carbide studs were outlawed in any state they might be used in the 70's. As I remember Canada could not decide if the road damage was worth possible safety improvement. Minnesota found interstate clover leafs destroyed in one season by studs; that is 6 " deep ruts in concrete and asphalt pavements. Amoco Oil research did contract testing for MN , Utah and maybe other states.( I did not work on it but friends did .) The red rust from your old studs shows they were steel so this may be academic as the steel will wear away quickly.

They can, indeed, but it's not worth it. I did this for Colorado in-laws many years ago.

Getting the old ones out was problematic. Not only do the heads snap off, even if they come out clean, the "holes" heal and unless you keep a sharp eye, are difficult to locate to install the fresh stud.

However, on the cheap I discovered it's perfectly reasonable to just leave the existing, and install more new studs close, but not too close, to the originals. These are not so location-dependent that another batch won't work just fine unless they are installed in the same position.

Again, I say "on the cheap"... Be prepared to check air pressure frequently, which is always an issue anyway. Frankly, the kind of tires that accept studs are not so expensive anyway, so depending on your budget, you might just want a clean slate.

A further aside is that nothing beats studs except chains (yes, I'm that old), but honestly ... modern snow/ice tires are incredibly effective. No, I'd still want studs in a Colorado mountain pass (I-25, or maybe Grand Junction to Mesa) but I can drive on the new "snow" tires year round if I want. Once the "snow" portion wears away (quickly in the dry), you are just left with the normal sipes and a normal wearing tire. And it always amazes me how inexpensive these new snow/ice tires are compared to the same size performance radials. Check out one of the online retailers for Bridgestone Blizzack or the Swedish Nokian Hakkapelittahakena (no, that isn't spelled even marginally right) as well as a half dozen other competant brands.

Cheap rims are nice to keep them mounted year-round. The money might be well-spent considering the new curse words you will invent attempting to restud old dry tires.

I re-stud my winter tires all the time. This will be the third season for these in Saskatchewan. Removing them is simple with a side cutter pliers. Just push the point of the pliers up against each side of the stud and grab it and pry it out. Took about 5 minutes per tire and then just re-stud. Maybe wear a glove though if the pliers has a rubber handle because it will give you a nasty blister on the inside of your thumb. I noticed that I had lost two studs over the coarse of two seasons but I have no idea what the failure rate might be on newly studded tires. Simple cheap process!

I run studded snow tires in the winter here in New Hampshire from November through March and find that they are good for about 3 seasons. After three seasons I leave them on the car for the remainder of their tread life and buy new studded tires the following year.

Not the answer you're looking for? Browse other questions tagged tires maintenance vw or ask your own question.