How does the BMW M4 GTS achieve low water consumption in its water injection system?

Bosch recently made waves when it announced plans to offer the M4 GTS' water-injection system to other mass-produced vehicles. 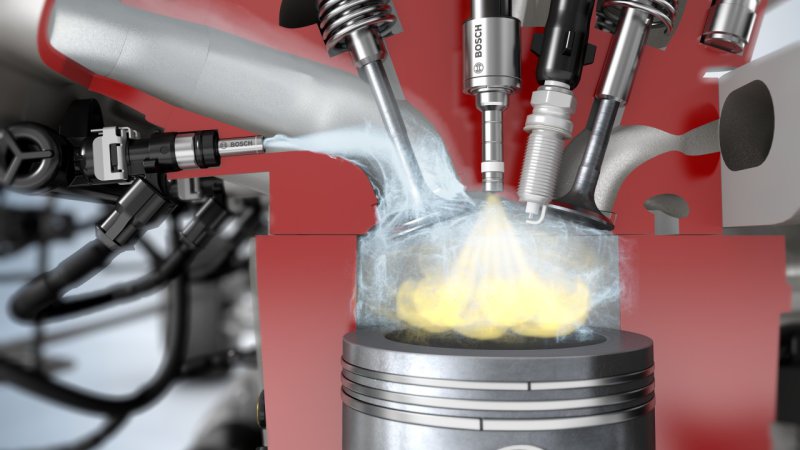 Now water injection isn't a new concept; Bruce Crower put the six-stroke engine in the limelight about a decade ago, but articles were quick to point out that it would require a significant supply of clean water:

Preliminary estimates suggest a Crower cycle engine will use roughly as many gallons of water as fuel.

What prompted this question is Bosch's claim that the water tank needs to be replenished once every 1800 miles (roughly 2900 km).

That is an order of magnitude less water consumption. How come?

From the video in the linked article, it doesn't look like they are doing any recycling/filtration of the water.

Of course, it could be that the amount of water required is teensy-weensy, but I don't see how it would explain the order-of-magnitude difference between this Bosch design and the Crower six-stroke.

Aha, here is what I believe is the true answer.

Whereas the MotoGP M4 draws its water from a manually filled tank in the boot, however, BMW's latest water-cooled prototype is fitted with a water recovery system that constantly tops itself up with condensed water from the air conditioning system.

Funny, my brother and I were discussing water injection, and we suggested the idea of using water from the AC system. Thought I'd research it to figure out if anyone had thought of it, and... tada!

There are two major differences in what's going on with either engine.

The Crower engine design utilizes six-strokes to accomplish what it's doing. It uses the extra two strokes to create an extra power stroke (so you'll have two power strokes per three revolutions of the crankshaft instead of the Otto cycle's single power stroke for every two turns). The idea is to utilize the heat energy which is already there, which would otherwise be going out the tail pipe or getting syphoned off through the radiator. Water is being used all the time to accomplish this.

What BMW is using water for is more the typical idea of water injection. That being it is using it to control detonation in the cylinder. Unless the engine needs it under stressful situations, the water isn't going to be used. Then when it is used, it's only used sparingly ... just enough to ensure detonation is squelched. This allows for higher power outputs from the engine without fear of killing the engine.

For a little background on why using water is so good in either situation, there are several reason:

There are probably more reasons, but these are a few of the good ones.

Located in the boot of the BMW M4 MotoGP Safety Car is a water tank with a gross volume of about five litres, which houses the water pump, sensors and valves. The pump and complete system of sensors and actuating elements are controlled by the engine electronics, which have been upgraded accordingly. In practice, the pump feeds the water to the injectors at a pressure of ten bar, whereby the appropriate volume is supplied depending on load, engine speed and temperature. This ensures that water consumption is kept to an absolute minimum. In rigorous action out on the racetrack, it is always necessary to refill the water supply whenever the car must refuel. During standard operation, the intervals between water refills are considerably longer, depending on the driving style. Even when driving faster on the motorway, it is only necessary to refill the water container roughly every five stops for refuelling. To ensure the system is as suitable as possible for daily use, it does not require any additional maintenance.

In other words, for normal usage on your car, the amount of water required to prevent engine knocking is so minimal that a 5 litre tank is sufficient to do a significant amount of mileage.

The stark difference between the two approaches becomes self-evident; they really are orders of magnitude apart:

This article claims that the water injection system provides an additional 80 °F (44 °C) of cooling:

Depending on the design and size of the system, and the aerodynamics of the vehicle, it is only possible to use an intercooler to reduce the intake air temperature by as much as 160° F before it enters the plenum chamber. This means that simply rising engine power by increasing boost pressure is not an option as it would mean exceeding the knock threshold.

This is where the BMW M division’s solution comes in: if water is injected in a fine spray mist into the intake plenum chamber, it is possible to reduce the temperature of the intake air by an additional 80° F.

12
How does intake manifold runner length effect the power curve of a car?
14
How does the tachometer on my dashboard actually work?
11
How does raw fuel damage the catalytic converter?
10
Direct Injection Injectors - How do they prevent blow back into the fuel system?
8
What is the muffler? How does it work?
4
How does water/meth injection on a diesel work
5
The Infiniti MCE-5 VC-T - How does it work?
1
On old cars with a carburetor, how does pressing the gas pedal lead to the engine rotating faster?
2
How does atmospheric condition affect operation and consumption
1
How does a water coolant work as a car coolant using newton’s law of cooling?(high schools student needs help)