Does a plastic model engine have enough real combustion engine replica parts to simulate working on a real engine?

I was trying not to make this too much opinion. I am eager to learn to work on an engine, but I thought maybe I could buy a plastic engine model kit, Revell or some other brand.

Is building a small model engine like that remotely close to working on a real engine? By that I mean learning the parts and how it works. I know it's a lot cleaner, etc. Or is it a waste of time?

I think so. Hella to the "yes!" There's truly nothing better than Revell's "Visible V8" model. That's what I had when I was a kid. (Please ignore the moth storm, smell of linament, and the dust cloud.)

My own kid bought the modern version (with a very subtle pressure from his father) and he learned a bunch. The modern version isn't quite the same as the vintage one I did four decades ago, but in some ways it's better. The original only came with assembly instructions. The modern version comes with posters and charts that actually explain real-life operation.

This kit is now quite expensive, but careful shopping and observance of "eBay" type venues might land you a deal. (Grandpa sometimes pays full boat, and grandson [grandaughter?] has no interest outside of Xbox.) A shame in my opinon, but another story.

Although it doesn't teach how to work on an engine, it does a fine job of showing in an active visual context the timing, process, strokes of the "Otto" cycle, and the general arrangement of parts. Granted, it's representing 4-5 decade (acutally six or more, I've been deducting years now according to my AARP plan) old engine technology, but the strokes haven't changed ("suck, squeeze, bang, blow") and ...

a fundamental understanding of the parts, timing, strokes, camshafts, distributor, crankshaft, etc. is the best foundation for any attempt at working on an internal combustion engine.

I can teach you how to use wrenches and sockets and screwdrivers safely in the first two weeks of my class. A knowledge that says "I own this" about the Otto cycle takes many many hours of study and experience.

SO... Check out the neo-ancient Revell Visible V8. If you need help, let me know--I am very good at sniffing the glue. ERRRR, I mean helping educate. 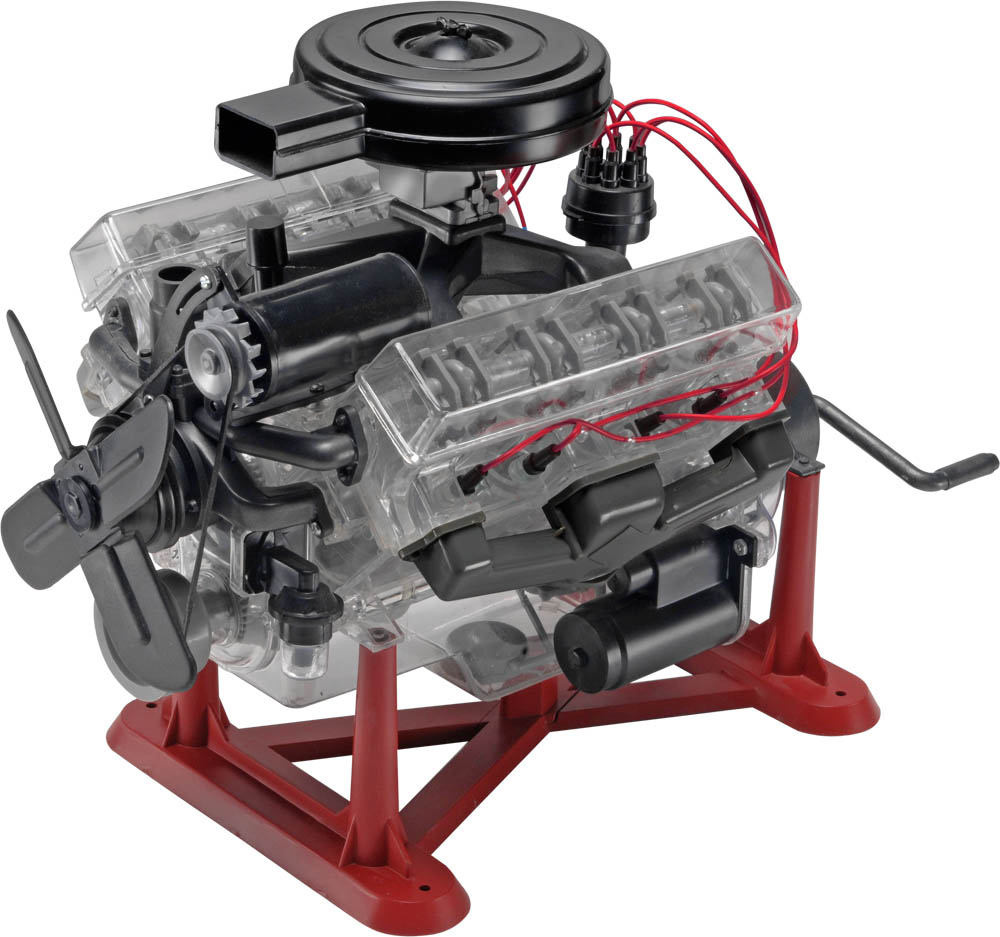 Is building a small model engine like that remotely close to working on a real engine?

It depends on what vintage real engine you expect to transfer this knowledge to.

The model engine may have

Personally, I think you'd pick up more useful skills by taking an old 4-stroke lawnmower engine apart and then getting it working. It's equally unlike a modern car engine but you'll learn some useful skills. But that's just my opinion.

Some of these simulators are getting pretty good too. I agree the Revell kits are great used to have one myself and grabbing a small engine and going for it is also really good. usually you can find a cheap used 4 stroke carbureted engine on craigslist for pretty cheap.

3
Engine does not have enough power (and has limited RPM)
10
Estimate for head removal / reinstall
2
SB350 cutout at freeway speed, revs fine in neutral
1
Which engine does a 2005 Kymco People 50 have?
17
Why does diesel engine have redline much lower than petrol engine redline?
7
Engine run-on (dieseling) condition suddenly getting much worse
3
2004 powerstroke white smoke now no start
1
How does enough oil remain after combustion to lubricate during exhaust stroke