I wonder what percentage of the questions here are from me about this car...

When I try to accelerate with more than about 60-75% throttle at lower RPM (say, under 3k or so), the car starts to accelerate, then acts like there's a fuel cut. This will continue until I let off of the pedal. I can accelerate gradually and eventually hit WOT without an issue, but doing it fast always causes this issue unless I'm already at a higher RPM.

I've noticed that, when this happens, my AFR shows a (surprising) 10 - 10.5, which also happens under WOT when the car is running correctly. Way, way rich. When I let off of the throttle, I can smell gas.

Recently, I've replaced the exhaust (cat-back), fixed the downstream O2 sensor that had the wiring harness slashed. I reset the ECU after that. (Note that this problem started a few weeks ago, before I fixed the O2 sensor or replaced the cat back.)

I also have a CEL, with the following DTCs:

The car has an aftermarket turbo, and is tuned for this kit. However, I've had weird issues ever since I put the kit on.

I've checked the air filter and spark plugs. Everything looks fine. I recently replaced the turbo-to-exhaust manifold gasket which had exploded.

Any suggestions? I'm running out of ideas. I'll check the cam sensor and make sure it's properly connected but I doubt that's the issue.

I replaced both cam actuator solenoids and the hesitation is gone, however now the car sounds horrible (somewhat like a Diesel) at idle, though I can hear then noise at lower RPMs while moving, as well.

Vacuum on my boost gauge used to be ~25mmHg at idle, now it's ranging from 15 to 20. Which (to me) also indicates a vacuum leak. Really, really going to try blocking off the EVAP at the throttle body today.

I suspect the 10 AFR readings may be near the limit of the sensor or gauge's useful range. (It's an AutoMeter wideband, upstream from the cat.) I'm going to hook up HPTuners this afternoon and do some logging.

Oh, and I had a very nice backfire on the way to breakfast this morning after letting off the throttle at high boost/RPM. I thought to myself:

"Self, this neighborhood is really going to crap. I mean, who shoots at a stranger before breakfast?"

This morning, the car is running REALLY rough. It tried to die at a stop light a few times. Typically when this happens, it smooths out once I get moving, which it did a few times. However, after the last light I stopped at before reaching my destination, the car started surging pretty badly, almost as if I was hitting the gas like a snare drum.

Before I left this morning I hooked up HP Tuners and captured a log file. If anyone here has the expertise to interpret this in a useful way, please, please speak up.

I did make it for a day and a half without a CEL after replacing the cam actuator solenoids and resetting the computer. Now, I have another DTC (P0171 - Fuel Trim System Lean Bank 1). 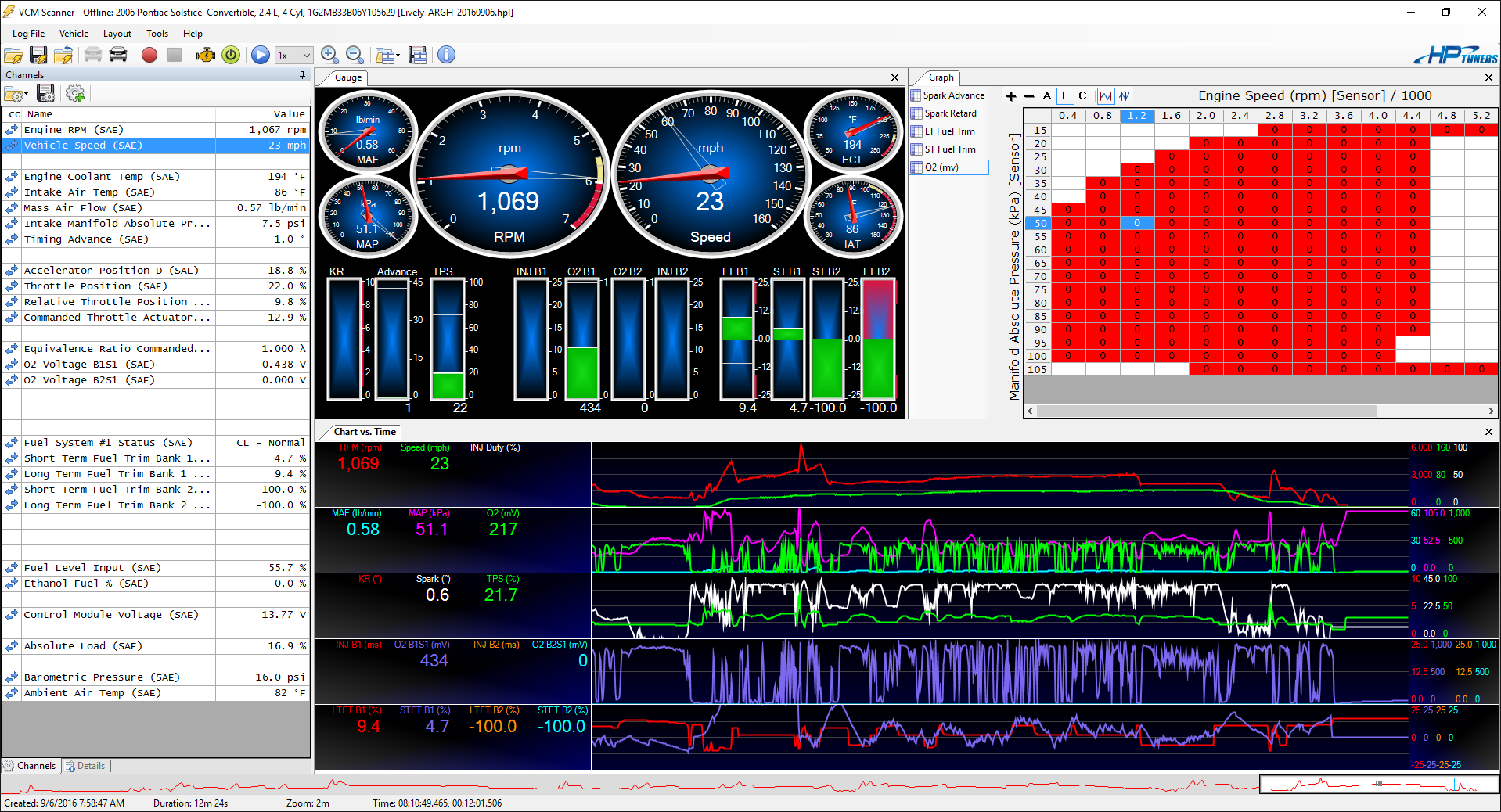 This is getting a little long - maybe I should start another thread.

Having cleaned the MAF, checked the O2 sensors, hunted all over for a vacuum leak (here's a hint - don't spray carb cleaner near a disconnected vacuum hose that's actually carrying positive pressure. Your eyes will not thank you), etc., I finally pulled the NEW cam actuators back out, and saw this: 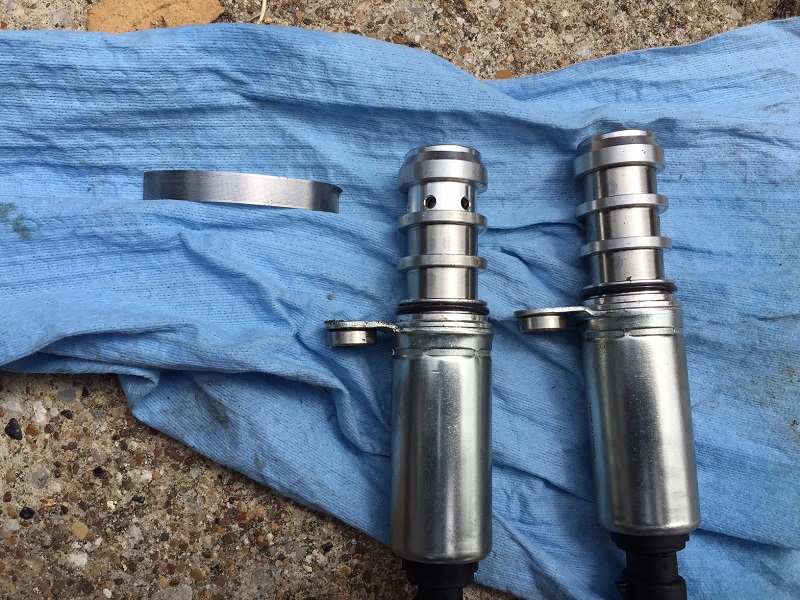 On the left is the new Dorman exhaust cam actuator solenoid. The disconnected peace is a screen that's SUPPOSED to be attached to the solenoid. When I pulled the solenoid out of the head, that piece stayed in the head.

Fortunately, I still had the old ones, so I put the old exhaust actuator back in. The car no longer sounds like it is going to explode and hasn't left me stranded. Also, my temps are down by about 10 degrees Fahrenheit.

Unfortunately, the low-RPM / WOT hesitation problem I had before is back, but I expected that.

Since this was acting like a vacuum leak, my theory is this: the ECU was trying to adjust timing on both intake and exhaust, but wasn't really able to do so for the exhaust side. The cam position sensor told the computer, correctly, that the exhaust cam wasn't at the requested phase / offset. This may have lead to a slight overlap in intake / exhaust cycles.

If that was the case, the whole exhaust system could have become a vacuum leak.

While I was at it, I went ahead and plugged up my Profec solenoid and relocated the power steering reservoir away from the turbo, and finally found a small PS leak that's been plaguing me for months. Perhaps now I'll finally have a clean, leak-free and performant engine.

Thanks to all for the input. I'm sure something else will explode next week and provide another opportunity to post Solstice drama!

A lot of the symptoms sound like an air leak, which would fit with the p0455 error code. I would try to block off the evap connection to the air intake to see if that helps.

Why do I think this? When you are accelerating gently, the ECU is probably adjusting the mixture to compensate for the extra unmetered air using the reading from the o2 sensor. When you put your foot down, it is not able to compensate for the extra air and the engine runs lean causing the hesitation. However, the ECU thinks the mixture is rich because the air flow meter is showing less air than is really entering the intake.

The engine revs when you let off the throttle, because there is still air getting in which keeps the engine revving. The ECU then closes the IAC to try to drop the revs, but doesn't quite manage to bring them right down.